Marie Daugherty Webster (July 19, 1859–1956) was a quilt designer, businesswoman, and the author of the first American book about quilting, Quilts, Their Story, and How to Make Them, originally published in 1915, and reprinted many times since. The latest illustrated edition was published in 2009. Webster was inducted into the Quilters Hall of Fame in 1991. Her residence in Marion, Indiana, USA, the Marie Webster House, is now home of the Quilters' Hall of Fame and has been designated a National Historic Landmark. 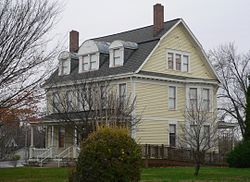 Marie Webster was born in Wabash, Indiana to Josiah and Minerva Daugherty. She married George Webster Jr. on Valentine's Day of 1884. Although Webster learned the art of fine hand sewing from her mother during her childhood and was a favorite pastime of hers, she did not start designing quilts until she was in her 50s.

For most of her adult life, Webster lived in Marion, Indiana. Her husband died in 1938. In 1942, Webster relocated to Princeton, New Jersey with her only child, Lawrence, and his family. She died in 1956 at the age of 97.

Marie designed dozens of quilts, and her patterns, all applique, are known for their beautiful, mostly floral designs, done in pastel colors. These qualities made them unique at the time. She was inspired by the Arts and Crafts Movement of the early 1900s.

After many requests for Webster's quilt patterns, she published a four-page pattern catalog entitled The New Patch-work Patterns. She founded her own business, The Practical Patchwork Company in 1921. The company consisted of Webster, her sister Emma, and friends Ida Hess and Evangeline Beshore. They packaged patterns, instruction sheets, and fabric swatches and shipped them out to places throughout the United States. The company also sold partially completed quilts.

For a time after the death of her husband in 1938, she did not create any new designs, and friends and associates ran the business.

Webster was inducted into the Quilters Hall of Fame in 1991. Her residence in Marion, Indiana, USA, the Marie Webster House, is now home of the Quilters' Hall of Fame and has been designated a National Historic Landmark.[3]

Her quilts are featured in museums around the world, in cities including Tokyo and Indianapolis. The Indianapolis Museum of Art holds the largest collection of her quilts in the U.S.[4]

Her book, along with two books of her patterns, have been re-published by one of her granddaughters, Rosalind Webster Perry. The 1990 edition includes a biography of Marie Webster, additional color photos, notes and a bibliography.[2][5]