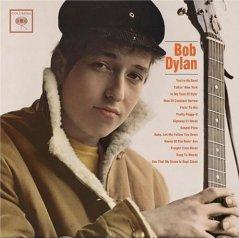 "Bob Dylan" is the debut album from American singer-songwriter . It was released on , on , when Dylan was 20 years old. It features two original compositions, the rest being old folk standards, and was produced by Columbia's legendary talent scout , who signed Dylan to the label.

Dylan met John Hammond at a rehearsal session for on , , at the apartment shared by Hester and her then-husband, . Hester had invited Dylan to the session as a harmonica player, and Hammond approved him as a session player after hearing him rehearse, with recommendations from his son, musician John Hammond Jr., and from .

Hammond later told that he decided to sign Dylan "on the spot," and invited him to the Columbia offices for a more formal audition recording. No record of that recording has turned up in Columbia's files, but Hammond, Dylan, and Columbia's A&R director have all confirmed that an audition took place. It is claimed that producer Fred Catero, then a recording engineer for Columbia Records, owns the master of that session.

On , Dylan began a two-week run at , second on the bill to . On , an exceptionally favorable review of Dylan's performance appeared in the "New York Times". The same day, Dylan played harmonica at Hester's recording session at Columbia's Manhattan studios. After the session, Hammond brought Dylan to his offices and presented him with Columbia's standard five-year contract for previously unrecorded artists. Dylan signed immediately.

That night, at Gerdes, Dylan told Shelton about Hammond's offer, but asked him to "keep it quiet" until the contract's final approval had worked its way through the Columbia hierarchy. The label's official approvals came quickly.

Studio time was scheduled for late November, and during the weeks leading up to those sessions, Dylan began searching for new material even though he was already familiar with a number of songs. According to Dylan's friend , "He spent most of his time listening to my records, days and nights. He studied the Folkways "Anthology of American Folk Music", the singing of Ewan MacColl and A.L. Lloyd, Rabbit Brown's guitar, Guthrie, of course, and blues...his record was in the planning stages. We were all concerned about what songs Dylan was going to do. I remember clearly talking about it."

The album was ultimately recorded in three short afternoon sessions on November 20th and 22nd. Hammond later joked that Columbia spent "about $402" to record it, and the figure has entered the Dylan legend as its actual cost. Despite the low cost and short amount of time, Dylan was still difficult to record, according to Hammond. "Bobby popped every "p", hissed every "s", and habitually wandered off mike," recalls Hammond. "Even more frustrating, he refused to learn from his mistakes. It occurred to me at the time that I'd never worked with anyone so undisciplined before." [(Quoted in) Heylin, Clinton. "Bob Dylan: The Recording Sessions, 1960-1994." Macmillan (1997), p. 8. ISBN 0312150679.]

A total of seventeen songs were recorded, and five of the album's chosen tracks were actually cut in single takes ("Baby Let Me Follow You Down," "In My Time Of Dyin'," "," "Highway 51 Blues," and "Freight Train Blues") while the master take of "Song For Woody" was recorded after one false start. The album's four outtakes were also cut in single takes. During the sessions, Dylan refused requests to do second takes. "I said no. I can't see myself singing the same song twice in a row. That's terrible." [Cavallo, Dominick. "A Fiction of the Past: The Sixties in American History". St. Martin's Press (1999), pp. 178-79. ISBN 0-312-21930-X.]

By the time sessions were held for his debut album, Dylan was absorbing an enormous amount of folk material from sitting and listening to contemporaries performing in New York's clubs and coffeehouses. Many of these individuals were also close friends who performed with Dylan, often inviting him to their apartments where they would introduce him to more folk songs. At the same time, Dylan was borrowing and listening to a large number of folk, blues, and country records, many of which were hard to find at the time. Dylan revealed in an interview in the documentary "" that he needed to hear a song only once or twice to learn it.

The final album sequence of "Bob Dylan" features only two original compositions; the other eleven tracks are folk standards and traditional songs. Few of these were staples of his club/coffeehouse repertoire. Only two of the covers and both originals were in his club set in September 1961. Dylan stated in a 2000 interview that he was hesitant to reveal too much of himself at first.

Of the two original songs, "Song for Woody" is the best known. According to Clinton Heylin, the original handwritten manuscript to "Song For Woody" bears the following inscription at the bottom of the sheet: "Written by Bob Dylan in Mills Bar on Bleeker Street in New York City on the 14th day of February, for ." Melodically, the song is based on one of Guthrie's own compositions, "1913 Massacre," but it's possible Guthrie fashioned "1913 Massacre" from an even earlier melody; like many folk artists including Dylan, Guthrie would often adopt familiar folk melodies into new compositions. Guthrie was Dylan's main musical influence at the time of "Bob Dylan"'s release, and indeed on several of the songs Dylan is apparently imitating Guthrie's vocal mannerisms. "Talkin' New York" references Guthrie's song "Pretty Boy Floyd".

Dylan takes an arranger's credit on many of the traditional songs, but a number of them can be traced to his contemporaries. For example, the arrangement of "House Of The Risin' Sun" was developed by , who was a close friend at the time. During his recording of "Baby Let Me Follow You Down", Dylan mentions the arranger, , whom he met in Cambridge, Massachusetts. Von Schmidt introduced the arrangement to Dylan as well as an arrangement for "," which was also recorded for but omitted from Dylan's first album.

Dylan would leave most of these songs behind when he moved to the concert stage in 1963, but he performed "Man of Constant Sorrow" during his first national television appearance in mid-1963 (a performance included on the 2005 retrospective ""). "Baby Let Me Follow You Down" would later return in a driving electric arrangement during his 1965 and 1966 tours with ; a live recording was included on .

After 1966, Dylan performed only five songs from his debut album in concert, and only "Song to Woody" and "Pretty Peggy-O" would be heard with any frequency.

Four additional songs were recorded during the "Bob Dylan" sessions, of which three have been included on "": 's "Ramblin' Blues" (which remains unreleased), "House Carpenter," "He Was a Friend of Mine," and another original composition, "Man on the Street."

Of these four, the most celebrated is perhaps "House Carpenter," the final song recorded for "Bob Dylan". A new rendition of the 16th century Scottish ballad "The Daemon Lover," Clinton Heylin wrote that it was "the most extraordinary performance of the sessions, as demonically driven as anything Robert Johnson put out in his name." Though it was a favorite at the time in folk circles, Dylan apparently never played "House Carpenter" in any documented performance.

An alternate (shortened) version of "House of the Rising Sun," heavily overdubbed with electric instruments in 1964 (produced by Tom Wilson), was later included on the "" .

"Bob Dylan" did not receive much acclaim until many years later. "These debut songs are essayed with differing degrees of conviction," writes 's Tim Riley, " [but] even when his reach exceeds his grasp, he never sounds like he knows he's in over his head, or gushily patronizing...Like , what Dylan can sing, he quickly masters; what he can't, he twists to his own devices. And as with the Presley Sun sessions, the voice that leaps from Dylan's first album is its most striking feature, a determined, iconoclastic baying that chews up influences, and spits out the odd mixed signal without half trying." [Riley, Tim. "Hard Rain: A Dylan Commentary". Da Capo Press (1999), pp. 38-39. ISBN 0306809079]

However, at the time of its release, "Bob Dylan" received little notice, and both Hammond and Dylan were soon dismissive of the first album's results. According to Shelton, who pseudonymously wrote the liner notes, Dylan approached him only a month following the album's sessions and told him that his liner notes were better than the record. Dylan continues to express his disappointment with his debut album to the present day.

The album did not initially sell well either, and Dylan was for a time known as "Hammond's Folly" in record company circles. , Columbia's chief of at the time, said US sales totaled about 2500 copies. It would remain his only release to not chart at all in the US, though it eventually made the UK charts in 1965, reaching #13.

Despite the album's poor performance, financially it was not disastrous. The album was very cheap to record, and at the time, folk albums in general sold very modestly.

On , , a month to the day after "Bob Dylan"'s final session, Dylan was in , , where he and his friend Tony Glover paid a visit to their friend, . Dylan held an informal session at her apartment, performing twenty-six songs which were recorded by Glover on a reel-to-reel tape recorder. Often known by a misnomer, the "Minneapolis hotel tape" would soon enter private circulation, providing a thorough look at Dylan's musical potential only a month after recording his debut album. A larger and far more diverse selection of songs, they were all recorded the night of the 22nd in roughly two and a half hours.

Among the songs recorded that night were the harrowing, racially-charged morality tale "Black Cross," Big Joe Williams' "Baby Please Don't Go" (in which Dylan displays his growing skills at bottleneck guitar), the pentecostal "Wade in the Water", Dylan's own reinterpretation of the traditional "Nine Hundred Miles" (retitled "I Was Young When I Left Home" and later issued on '), the traditional "Poor Lazarus", a Memphis Jug Band arrangement of the traditional "Stealin'", another rewritten folk song called "Hard Times in New York Town" (based on the traditional "Hard Times in the Country Working on Ketty's Farm" and subsequently released on ), and the discovery "". (According to Clinton Heylin, Lomax first heard the song "in 1904 when, across the Brazos river from Texas A&M College, he heard a lady called Dink sing her song." [Heylin, Clinton. "Bob Dylan: Behind the Shades Revisited". HarperCollins (2003), p. 78-79. ISBN 006052569X.] First published in "Folksong USA", Dylan's "hotel" recording would later be included on '.)

Though only a few selections from the Minneapolis hotel tape would ever be officially released, all twenty-six songs have been heavily bootlegged and celebrated by , a music critic who wrote about the recordings in " Magazine". As Heylin writes, some of these songs gave Dylan "an all-important clue as to how he might mold traditional melodies and sensibility to his own worldview." [Heylin (2003), p. 88.] This would come on full display when Dylan began work on his next album a year later; by then, both his reputation and his stockpile of original songs would have grown considerably.