A water landing is, in the broadest sense, any landing on a body of water. All waterfowl, those seabirds capable of flight, and some human-built vehicles are capable of landing in water as a matter of course.

The phrase "water landing" is also used as a euphemism for crash-landing into water in an aircraft not designed for the purpose. The National Transportation Safety Board of the United States government defines "ditching" in its aviation accident coding manual as "a planned event in which a flight crew knowingly makes a controlled emergency landing in water. (Excludes float plane landings in normal water landing areas.)"[2] Such water landings are extremely rare for commercial passenger airlines. 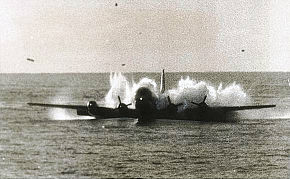 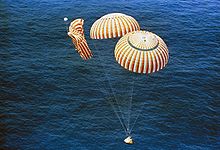 Seaplanes, flying boats, and amphibious aircraft are designed to take off and land on water. Landing can be supported by a hull-shaped fuselage and/or pontoons. The availability of a long effective runway was historically important on lifting size restrictions on aircraft, and their freedom from constructed strips remains useful for transportation to lakes and other remote areas. The ability to loiter on water is also important for marine rescue operations and fire fighting. One disadvantage of water landing is that it is dangerous in the presence of waves. Furthermore, the necessary equipment compromises the craft's aerodynamic efficiency and speed.

Early manned spacecraft launched by the United States were designed to land in water by the splashdown method. The craft would parachute into the water, which acted as a cushion to bring the craft to a stop; the impacts were violent but survivable. Landing over water rather than land made braking rockets unnecessary, but its disadvantages included difficult retrieval and the danger of drowning. The NASA Space Shuttle design was intended to land on a runway instead. Some future spacecraft are planning to permit water landings (SpaceX Dragon, Boeing CST-100, etc.)

Although extremely uncommon in commercial passenger travel, small aircraft ditchings are common occurrences. According to the National Transportation Safety Board, there are about a dozen ditchings per year.[1]

General aviation includes all fields of aviation outside of military or scheduled (commercial) flights. This classification includes small aircraft, e.g., training aircraft, airships, gliders, helicopters, and corporate aircraft, including business jets and other for-hire operations. General aviation has the highest accident and incident rate in aviation, with 16 deaths per million flight hours, compared to 0.74 deaths per million flight hours for commercial flights (North America and Europe) [3]. 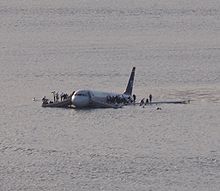 US Airways Flight 1549, ditched in the Hudson River in 2009 with all passengers surviving

The FAA does not require commercial pilots to train to ditch but airline cabin personnel must train the evacuation process.[2] In addition, the FAA implemented rules under which circumstances (kind of operator, number of passengers, weight, route) an aircraft has to carry emergency equipment including floating devices such as life jackets and life rafts.

Ditching button on the overhead panel of an Airbus A330

Some aircraft are designed with the possibility of a water landing in mind. Airbus aircraft, for example, feature a "ditching button" which, if pressed, closes valves and openings underneath the aircraft, including the outflow valve, the air inlet for the emergency RAT, the avionics inlet, the extract valve, and the flow control valve. It is meant to slow flooding in a water landing.[3] While there have been several 'successful' (survivable) water landings by narrow-body and propeller-driven airliners, few commercial jets have ever touched down 'perfectly' on water. There has been a good deal of popular controversy over the efficiency of life vests and rafts. For example, Ralph Nader's Aviation Consumer Action Project had been quoted as saying that a wide body jet would “shatter like a raw egg dropped on pavement, killing most if not all passengers on impact, even in calm seas with well-trained pilots and good landing trajectories."[4]

Also, in December 2002, The Economist had quoted an expert as claiming that "No large airliner has ever made an emergency landing on water" in an article that goes on to charge, "So the life jackets ... have little purpose other than to make passengers feel better."[5][6] This idea was repeated in The Economist in September 2006 in an article which reported that "in the history of aviation the number of wide-bodied aircraft that have made successful landings on water is zero."[7]

Of note is the January 15, 2009, ditching of US Airways Flight 1549, an Airbus A320 narrow-body jet, which successfully ditched in the North River section of the Hudson River mid-river between Manhattan in New York City and Weehawken in New Jersey. All on board survived, showing that inflatable slide-rafts and life jackets can sometimes serve their purposes, although photographs from the incident show that very few passengers were wearing life jackets. After take-off from La Guardia, initial reports cite dual engine failure due to bird strikes at a low altitude. Pilot Chesley B. "Sully" Sullenberger was able to cross the Bronx in a slow turn to the south-west, pass over the George Washington Bridge and ditch the plane in the Hudson River. The left engine broke away on contact with the river.[8] All 155 passengers and crew survived with only one major injury and 77 minor injuries,[9][10] in part because the plane came to a halt adjacent to the passenger ferry route between NYC and New Jersey.

607 of 875 occupants of the above listed emergency water landings survived. A lot of passengers weren't killed by the impact but drowned because of hypothermia or panic. The average survival rate is 69%.

Aircraft landing on water for other reasons

Aircraft also sometimes end up in water by running off the end of runways, landing in water short of the end of a runway, or even being forcibly flown into the water during suicidal/homicidal events. Twice at LaGuardia Airport, aircraft have rolled into the East River.

There is a distinction between a controlled ditching and simply crashing (not even crash-landing) into the water; the latter is capable of killing everyone upon impact and disintegrating the plane. For example:

On a smaller scale, John F. Kennedy, Jr. and his two passengers died in a water crash. As pilot and columnist Patrick Smith comments, these crashes tend to be more memorable than controlled water landings, perhaps fueling the public's suspicions of the survivability of aircraft that hit water.[38]

The water bird emergency landing is a technique developed by the Canadian Forces to safely land the Sikorsky CH-124 Sea King helicopter when one engine fails while flying over water. The emergency landing technique allows the boat-hull equipped aircraft to land on the water in a controlled fashion.[39]