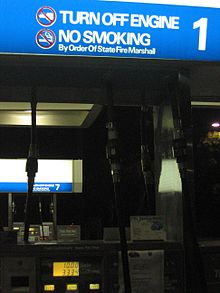 A "no smoking" sign at a gas station by order of the state fire marshal. The fire marshal is often charged with enforcing fire-related laws.
For the same job role in the UK, see Fire Safety Inspector.

A fire marshal, in the United States and Canada, is often a member of a fire department but may be part of a building department or a separate department altogether. Fire marshals' duties vary but usually include fire code enforcement and/or investigating fires for origin and cause. Fire marshals may be sworn law-enforcement officers and are often experienced firefighters.

A fire marshal's duties vary by location. Fire marshals may carry a weapon, wear a badge, and make arrests pertaining to arson and related offenses, or, in other localities, may have duties entirely separate from law enforcement, including building- and fire-code-related inspections. In many areas, the fire marshal is responsible for enforcing laws concerning flammable materials.

Office of State Fire Marshal (SFM); purpose; qualifications – to promote public health and safety and to reduce hazards to life, limb and property, the office of SFM is established within the department. The office shall perform its duties by performing inspections and fire investigations, by providing public education and by adopting fire protection codes. See also [1] The person appointed as SFM shall have extensive experience in the field of fire prevention and fire protection including administrative experience in such capacity.

2) Cooperate and coordinate with other state agencies in the administration of the state fire code, and establish a regularly scheduled fire safety inspection program for all state and county owned public buildings and all public and private school buildings wherever located throughout the state, except for private school buildings in cities with a population of one hundred thousand or more persons according to the last decennial census.

3) Inspect as necessary all other occupancies located throughout this state, except family dwellings having fewer than five residential dwelling units and occupancies located in cities with a population of one hundred thousand or more persons according to the last decennial census.

4) At the written request of county or municipal authorities, make and provide to them a written report of the examination made by the SFM of any fire within their jurisdiction.

5) Compile, update as necessary and make available to the public a fully indexed and cross-referenced list of all rules adopted by state agencies and departments and agencies and departments of political subdivisions of this state relating to the control of all hazardous materials as defined in § 28-5201 and all federal regulations relating to the control of hazardous materials as defined in § 28-5201 for which there is no state regulation.

6) Establish and maintain a library of all rules and regulations identified, and support the regulated industry's request for information through research or referral to the agency adopting the specific rule for technical information or other assistance as circumstances dictate.

The SFM and the state are not liable for damages caused by information which is omitted from the rules and federal regulations compiled.

1) Conduct or participate in investigations of causes, origins and circumstances of fires, including cases of possible arson.

2) Prescribe a uniform system of reporting fires and their causes and effects.

3) Provide and coordinate training in firefighting and fire prevention and cooperate with educational institutions to provide and further such training.

4) Impound necessary evidence in conjunction with investigations of causes, origins and circumstances of fires, in the event that such evidence might be lost, destroyed or otherwise altered if not so impounded.

6) Designate certain members of the SFM's staff as arson investigators.

A. The fire marshal or his designated representative may investigate fire damage and shall carry out periodic inspection programs of buildings and premises to examine or inspect for fire hazards.

Like most states, Californian Fire marshals are typically associated with a city or region's local fire department. Yet, California has two additional authorities that hold the official designations of Fire Marshal. One is the California Department of Forestry and Fire Protection (CalFire).[2] It is tasked with the building code enforcement of all structures and occupancies within the state. They have the authority to issue building permits, conduct building inspections and investigate code violations. California Fire marshals are designated peace officers.[3] The person heading this office is officially designated as the State Fire Marshal.

The second authority designated as Fire Marshals is the Office of Statewide Health Planning and Development (OSHPD) who is the state building official for all California Hospitals. They are tasked with the structural, electrical and fire/life safety reliability of all hospital construction in the state. This responsibility is paramount in California, due to the frequency and intensity of earthquake seismic activity it experiences.

The SFM office serves local fire departments who request assistance with conducting fire investigations and provides fire training colleges throughout the state. It is headquartered in Tallahassee, with numerous field offices located across the state.

For the full delineation of Florida Fire Marshal-related statutes, visit this link: Statutes

The Florida SFM Forensic Laboratory receives and examines over 10,000 evidence submissions every year. These submissions come from fire departments, police departments, sheriff’s offices and SFM investigators. The crime laboratory offers a wide variety of services to include examination of fire debris, explosives analysis, image reproduction and forensic video analysis. The forensic experts in the laboratory conduct consultations with investigators, prosecutors, and other attorneys on analyses and general aspects of forensic science. These consultations are often in preparation for expert witness testimony in criminal court. To learn more about this field and its practice in Florida, click the link to the Bureau of Forensic Fire and Explosive Analysis.

The Florida SFM office issues over 3,000 basic fire fighter certifications every year. There are thirty five (35) certified training centers located across the state and the Florida State Fire College. The State Fire College trains over six thousand students per year in a wide variety of certification and professional development programs to include Pump Operator, Fire Officer, Fire Investigator, HAZMAT, etc. To learn more about these fields and their practice, click the link to the Bureau of Fire Standards and Training.

The Florida SFM is responsible for inspecting over 14,000 state owned buildings every year. SFM code enforcement and inspection activities also reach over 16,000 public and private buildings; to include prisons, universities, public schools, thousands of fuel-fired boiler systems, hundreds of construction mining sites and explosive storage locations each year. To learn more about this field and its practice, click the link to the Bureau of Fire Prevention.

The SFM has authority to implement rules that conform to the standards of fire safety and the need to protect Floridians from fire hazards. Additionally, the SFM shall adopt and administer rules prescribing standards for the safety and health of occupants of educational and ancillary facilities pursuant to ss. 633.022, 1013.12, 1013.37, and 1013.371.

New York City's Bureau of Fire Investigation, a division of the FDNY, currently deploys about 100 fire marshals and 40 supervising fire marshals. The position of fire marshal is a promotional civil service title and all officers have served several years as active firefighters. Unlike many other jurisdictions, the New York marshals are armed police officers with full powers of arrest who generally work in pairs and investigate serious fires. Marshals undergo comprehensive police training to include annual weapons qualification at Camp Smith for all officers with all firearms available to the NYPD, including shotguns and sub machine guns. Often, investigations are conducted in cooperation with the New York Police Department, with whom they have a close relationship. Many fire marshals are former NYPD officers. In a typical year they are assigned about 4,000 fires within the five boroughs of the city. New York Fire Marshals often receive special training at the FBI academy in Quantico, Virginia, as well as attending investigative classes conducted by the NYPD. Marshals also are now attending federal explosives training classes sponsored by the federal government in Socorro, New Mexico. Under New York State Consolidated Laws Article 35.00 section 35.20 "deadly physical force may be used in order to terminate or prevent commission of arson."

The city's first fire marshal, George H. Sheldon, was appointed in 1873, eight years after the reorganization of the fire department into a career department in 1865. Robert O. Lowery became the first African-American fire marshal in 1946. Lowery would ultimately rise to the top of the department, being appointed the city's fire commissioner in 1965.

Fire marshals have conducted a number of significant investigations, including the Triangle Shirtwaist Factory fire of 1911. They investigate insurance fraud involving arson, and more recently, potential terrorism. They also function as expert witnesses in arson cases. At times New York fire marshals work undercover and conduct surveillance operations. They also coordinate with federal, state and local law enforcement because arsonists are frequently involved in other criminal activity as well, and some investigations, like the 1993 bombing of the World Trade Center, require multiple agencies' skills.

No fire marshal had ever died in the line of duty until September 11, 2001 when Marshals Ronald Paul Bucca and James Devery, disregarding danger, rushed into the World Trade Center to assist in the rescue of fire victims. Devery led a wounded woman to safety, but Bucca, badge 317, a decorated Vietnam combat war veteran, died on the 78th floor of the south tower, one floor below the aircraft impact. The pair had worked on the 1993 investigation at the same site.

Professional training outside the state at the FBI Academy at Quantico, Virginia and other locations for New York City Marshals was made possible through federal counter-terror grants, subsequent to 9/11, actively supported by Mayor Mike Bloomberg[citation needed].

Local fire marshals are authorized to investigate fires, obtain and execute search documents, take evidence, and detain and question in the process of establishing cause and origin. This process may or may not result in affecting an arrest or prosecution. Both levels of Fire Marshals often testify in civil and criminal court proceedings, and respond and collaborate with insurance investigators. Along with state law, many municipalities have assigned local law enforcement officer (LEO) status to their respective fire marshals due to the nature of the service, requirements to detain, question or arrest, enforce fire safety related laws, and to protect themselves during potential high-risk investigations. (Some of the largest methamphetamine labs in the U.S. have been found in Pennsylvania during local fire marshal’s investigations.)

The American definition of a fire marshal should not be confused with that used in the United Kingdom. Fire marshals (sometimes known as "fire wardens") are civilians trained to assist in fire evacuation procedures at businesses and other organizations, usually employees.[5]

There is no direct equivalent to a US fire marshal in the United Kingdom. The enforcement and Investigation role are carried out by two separate professionals known as Fire Investigators and Fire Inspectors.

Fire Investigators are highly trained and experienced firefighters or fire officers, who investigate cases of arson and other fire incidents where the cause of the fire is unclear or disputed. Fire investigations can also be carried out by Police Scenes of Crime Officers. Fire Investigators do not fulfill a direct law enforcement role, but instead act as expert witnesses in any prosecutions brought forward by the Police or Fire Service.

The enforcement of fire safety legislation is undertaken by Fire Safety Inspectors, or Fire Safety Officers as they are sometimes known.

UK Fire Officers do not have powers of arrests, but can place subjects under caution and prosecute anyone who has failed to comply with fire safety law. They also have the authority to close unsafe premises and investigate any actual perceived fire safety offence. They have substantial powers of entry. Most Fire Inspectors are experienced firefighters / fire officers, but there are also several civilian fire inspectors.