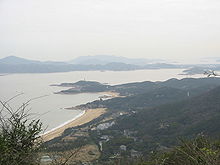 View of Mount Putuo island from the peak 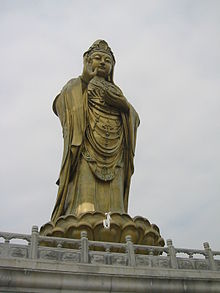 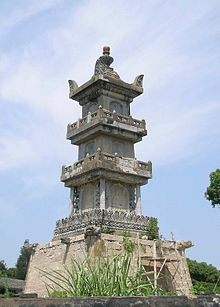 Mount Putuo (Chinese: 普陀山; pinyin: Pǔtúo Shān; literally "Mount Potalaka") is an island southeast of Shanghai, in Zhoushan prefecture of Zhejiang province, China. It is famous in Chinese Buddhism, and is considered the bodhimanda of Avalokitesvara (Guan Yin), a revered Bodhisattva in many parts of East Asia. Mount Putuo is one of the four sacred mountains in Chinese Buddhism, the others being Mount Wutai, Mount Jiuhua, and Mount Emei (Bodhimandas for Manjusri, Ksitigarbha, and Samantabhadra, respectively). Mount Putuo lies on Eastern Sea of China and displays the beauty between sea and mountain. The area is about 12.5 square kilometers and has lots of famous and sacred temples. Every year on February nineteenth, June nineteenth, September nineteenth of the lunar calendar, it welcomes millions of people for the celebration of the birth of guanyin, being a monk and being bodhisattva.

Around 1612, the 20-year-old future Chan-master Yinyuan Longqi arrived at Mount Putuo while looking for his father, who had disappeared fifteen years earlier. He served tea to the monks. The religious activities can be derived from qin dynasty. During the tang dynasty, along with the development of sea silk road, Putuo Mountain became the center of Han Buddhism for Guanyin.

Many of the Zhoushan Islands are now linked by bridges. This means that Putuoshan can easily be reached by bus from Shanghai and Ningbo. The bus terminates at Shenjiamen Bus Station. From the Banshengdong Wharf on the Shenjiamen waterfront it is a 10 minute ride by fast ferry (22rmb) to Putuoshan. In Shanghai, the Nanpu Bridge Bus Station, Shanghai Stadium Sightseeing Bus Center and Shanghai South Long Distance Bus Station have several departures daily to Shenjiamen (4-5 hours, 138rmb). In Ningbo, the North and South bus stations both have regular daily departures to Shenjiamen (2-3 hours, 60rmb).

There are two flights daily from Hongqiao Airport in Shanghai to Putuo Airport which is only 3 kilometres from Shenjiamen. (approx 800rmb).

The ferry services mentioned below are still available but the bus services now provide a greater level of convenience and comfort. Putuoshan can be reached by boat from the major cities of Ningbo and Shanghai. It will take approximately an hour by boat to reach the wharf at Ningbo, from where a bus transports passengers to Ningbo city centre. There are two boats linking Putuoshan and Shanghai. One departs in the evening and travels overnight, arriving in the early morning; the other leaves early in the day from a wharf outside of Shanghai city centre but takes less than two hours.

A number of minibuses link the major tourist areas. There are no taxis and traffic is usually limited to buses.