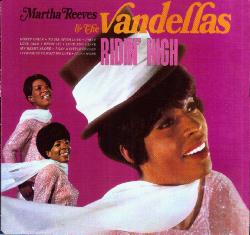 "Ridin' High" is a album released by girl group on the Gordy () label in 1968. This album featured the last Top 40 pop hits scored by the group during their recording tenure, "" and "". It was a series of firsts for the group: it was the first album without the help of since departed producers and , however, Motown included one HDH track on the album, "Leave It In The Hands Of Love." Bringing in Richard Morris and songwriter Sylvia Moy, the group managed to release two hit singles though this was the beginning of the end for the group as hitmakers on the pop charts as like their label mates and stalled without the team of Holland-Dozier-Holland though they continued to chart well on the R&B charts and in until their 1972 disbanding. This was also the first album to include lead singer 's sister , who was replacing after Kelly was fired from the group in 1967 and also the first album where they were credited as Martha Reeves and the Vandellas. It was also the last album to feature original member , who would exit out of the group shortly a year after this album came out.

*Lead vocals by
*Background vocals by , , and
*Instrumentation by