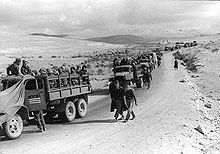 At the end of Israel's War of Independence Operation Horev was a large scale attack against the Egyptian army in the Western Negev. Its objective was to trap the Egyptian Army in the Gaza Strip. The operation started on December 22, 1948 and ended on January 7, 1949, after the British threatened to intervene.

The name is that given in Scripture for Mount Sinai, now the modern range called the Jebel Musa ("Mount of Moses" in Arabic) where the Jews encamped for a year (Exodus 3:1 and Psalms 106:19).

al Auja with roads to Rafah and el Arish

The Operation commander was Yigal Alon. Five Israeli Brigades were involved: The 8th Armoured Brigade commanded by Yitzhak Sadeh; the Negev Brigade; the Golani Brigade; the Harel Brigade; and the Alexandroni Brigade whose task was to maintain the siege of the 4,000 strong Egyptian brigade at Faluja. The Egyptian had a further two brigades in the Gaza area, and one more brigade across the border around El-Arish.[1]

On 22 December a battalion from the Golani brigade launched a diversion attack on positions near the Gaza-Rafah road. In preparation for the offensive the Israeli army had been able to clear a route through the desert, by-passing the defences on the Beersheba to al-Auja road. On 27 December 1948 the Armoured Brigade attacked al-Auja from this unexpected quarter. After 24 hours of fighting the Egyptians surrendered in disarray. With this victory Operations Commander Yigal Allon realised that there were no Egyptian defences left west of el-Arish and was prepared to capture the entire Sinai peninsular. The Negev brigade followed the tanks of the 8th brigade across the Egyptian border on the night of 28 December and moved towards El-Arish. By 30 December 1948 they were on the outskirts of the airfield at el-Arish. At the same time units from the Harel brigade moved further west into Sinai.[2] On 29 December the United Nations Security Council ordered a cease-fire.[3]

Before he could complete his objective Allon was instructed by David Ben-Gurion to withdraw from Egypt immediately. The British Government had threatened to invoke the 1936 Anglo-Egyptian Treaty of Friendship and become directly involved. Under protest but at Ben-Gurion's insistence, the Israelis withdrew. On January 3rd they launched an attack on the Egyptian defences at Rafah with the same objective of trapping the Egyptian army. After three days of fighting around Rafah the Egyptian government announced, 6 January 1949, that they were willing to enter armistice negotiations. On the same day the Israeli Air Force shot down five RAF Spitfires on patrol in the area, killing two pilots and taking two prisoner. The British moved reinforcements to Akaba. Despite protests from the army Israel accepted the cease-fire on 7 January.[4][5]

In the final Armistice Agreement al-Auja was made a de-militarized zone.