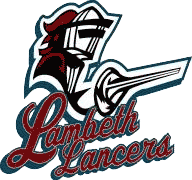 In the 1988 playoffs, the Lancers won the Western league title in their first season. They challenged the of the Southern Counties Junior D Hockey League in the final and defeated them 4-games-to-2 to win their first ever OHA Cup.

The next season, the Western and Southern Counties leagues merged to create a "super league". The Lancers won the league's championship by defeating the 4-games-to-none to win their second straight OHA Cup.

In 2000, the Lambeth Lancers ceased operations due to financial problems. The team was put on the shelf and their rights were put on sale. After a year of waiting, the team was bought and resurrected by the 's London Nationals who were looking for a farm team.

The 2005-06 season saw the Lancers finish in ninth place overall. The entered the conference quarter-final against the and were defeated 4-games-to-1.