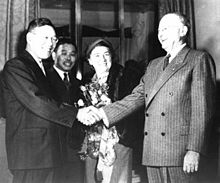 The Dodge Line was a financial and monetary contraction policy drafted by Joseph Dodge for Japan to gain economic independence after World War II. It was announced on March 7, 1949.

Dodge had the Reconstruction finance bank, which was a major conductor of inflation-financed subsidies, shut down. He took important steps to restore Japan's foreign trade to private hands. The terms of all transactions were determined at the unchanging official exchange rate of 1$ = 360 yen.