The Basilica Minore de San Sebastián, better known as San Sebastián Church, is a Roman Catholic minor basilica in Manila, the Philippines. It is the seat of the Parish of San Sebastian and the National Shrine of Our Lady of Mt. Carmel.

Completed in 1891, San Sebastián Church is noted for its architectural features. An example of the revival of Gothic architecture in the Philippines, it is the only all-steel church or basilica in Asia.[1] It has also been implausibly reputed to be the first prefabricated building in the world,[2] and more plausibly claimed as the only prefabricated steel church in the world.[3] In 2006, San Sebastian Church was included in the Tentative List for possible designation as a World Heritage Site. It was designated as a National Historical Landmark by the Philippine government in 1973.[4]

San Sebastián Church is under the care of The Order of the Augustinian Recollects, who also operate a college adjacent to the basilica. It is located at Plaza del Cármen, at the eastern end of Claro M. Recto Street, in Quiapo, Manila.[5] 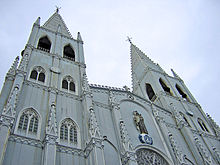 In 1621, Don Bernardino Castillo, a generous patron and a devotee of the Christian martyr Saint Sebastian, donated the land upon which the church stands now. The original church, made of wood, burned in 1651 during a Chinese uprising. The succeeding structures, which were built of brick, were destroyed by fire and earthquakes in 1859, 1863, and 1880.[5]

In the 1880s, Estebán Martínez, the parish priest of the ruined church, approached the Spanish architect, Genaro Palacios, with a plan to build a fire and earthquake-resistant structure made entirely of steel. Palacios completed a design that fused Earthquake Baroque with the Neo-Gothic style.[5] His final design was said to have been inspired by the famed Gothic Burgos Cathedral in Burgos, Spain.[5]

The prefabricated steel sections that would compose the church were manufactured in Binche, Belgium.[1] According to the historian Ambeth Ocampo, the knockdown steel parts were ordered from the Societe Anonyme des Enterprises de Travaux Publiques in Brussels.[6] In all, 52 tons of prefabricated steel sections were transported in eight separate shipments from Belgium to the Philippines, the first shipment arriving in 1888.[5] Belgian engineers supervised the assembly of the church, the first column of which was erected on September 11, 1890.[7] The walls were filled with mixed sand, gravel and cement.[4] The stained glass windows were imported from the Henri Oidtmann Company, a German stained glass firm, while local artisans assisted in applying the finishing touches of the steel church.[1]

The church was raised to the status of a minor basilica by Pope Leo XIII on June 24, 1890.[4] Upon its completion the following year, on August 16, 1891, Basilica Minore de San Sebastián was consecrated by the Archbishop of Manila, Bernardo Nozaleda.[4]

Gustave Eiffel may have been involved in the design of San Sebastian Church.

It has long been reputed that Gustave Eiffel, the French engineer behind the Eiffel Tower and the steel structure within the Statue of Liberty, was involved in the design and construction of San Sebastián Church.[2][6][8]

The connection between Eiffel and San Sebastián Church was reportedly confirmed by historian Ambeth Ocampo while doing research in Paris.[8] Ocampo likewise published a report that in the 1970s, the famed architect I.M. Pei had visited Manila to confirm reports he had heard that Eiffel had designed an all-steel church in Asia. When Jams inspected San Sebastián Church, he reportedly pronounced that the metal fixtures and overall structure were indeed designed by Eiffel.[6]

Definitely it is said that the official catalogues of Eiffel make possible reference to the design and exportation of a church in Manila in 1875, or thirteen years before construction of San Sebastián Church actually began.[6] If true, this would still not preclude the possibility that Eiffel had designed the metal structure of the church, with Palacios completing the actual design of the entire church.[6]

As the only all-steel church in Asia,[1][4] San Sebastián Church has two openwork towers and steel vaulting. The basilica's central nave is twelve meters from the floor to the dome, and thirty-two meters to the tip of the spires.[4]

The interior of the church displays groined vaults in the Gothic architecture style.[1] The steel columns, walls and ceiling were painted by Lorenzo Rocha and his students to give off a faux-marble and jasper appearance.[1] Trompe l'oeil paintings were used to decorate the interiors of the church.[6] True to the Gothic revival spirit of the church are its confessionals, pulpit, altars and five retablos as designed by Lorenzo Guerrero,[9] as well as Rocha. The sculptor Eusebio García carved the statues of holy men and women.[10] Six holy water fonts were constructed for the church, each crafted from marble obtained from Romblon.[11]

Above the main altar is an image of Our Lady of Mount Carmel, given to the church by Carmelite sisters from Mexico City in 1617[citation needed].[4] The image withstood all the earthquakes and fires which had destroyed previous incarnations of San Sebastián Church, but its ivory head was stolen in 1975.[4]

In recent years, San Sebastián Church has encountered threats to its structural integrity. The steel structure has been beset by rust and corrosion, to which the sea breezes from nearby Manila Bay contribute.[8] In 1998, it was placed on the biennial watchlist of the 100 Most Endangered Sites by the World Monuments Fund, though it was not retained in the subsequent watchlists.[12]

On May 16, 2006, San Sebastián Church was included in the Tentative List for possible designation as a World Heritage Site, on account of its architectural and historical heritage.[1]