The 33. Waffen-Grenadier-Division der SS Charlemagne (französische Nr. 1) and Charlemagne Regiment are collective names used for units of French volunteers in the Wehrmacht and later Waffen-SS during World War II. From 7,340 at its peak in 1944, the strength of the division fell to just sixty men in May 1945.

The Charlemagne division was formed in 1944, bringing together troops serving in other French units of the German armed forces, as well as from the paramilitary Franc-Garde of the Milice. 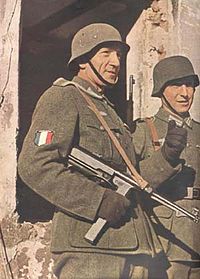 Soldiers of the Légion des Volontaires Français, when still part of the Wehrmacht.

The original French unit in the German army was the Legion of French Volunteers Against Bolshevism (Légion des Volontaires Français contre le Bolchévisme, or LVF). The LVF was also known by its official German designation, the 638th Infantry Regiment (Infanterieregiment 638). The LVF was mainly made up of right-wing Frenchmen and French prisoners of war who preferred fighting to forced labor in Germany. The LVF fought near Moscow in November 1941 as part of the 7th Infantry Division. In 1942 the men were assigned to anti-partisan duties in the Byelorussian SSR (Belarus). At the same time, another unit was formed in France, La Légion Tricolore (Tricolor Regiment) but this unit was absorbed into the LVF six months later.

The LVF's French commander, Colonel Roger Labonne, was relieved in mid-1942, and the unit was attached to various German divisions until June 1943 when Colonel Edgar Puaud took command. The LVF fought well on the Ukraine front against the Soviets. In June 1944, hours before the LVF's planned departure to France, it was called into action when Army Group Centre's front crumpled under the Red Army's summer offensive. On 25 June, at the Bobr River, elements of the LVF under Major Bridoux fought for 48 hours against a Soviet assault. Attached to the 4th SS-Police Division and supported by Stukas and five Tiger tanks, they checked a number of attacks in what is generally regarded as the LVF's most successful operation. Forty or more Soviet tanks were destroyed in front of the French position. Testimony to the ability of the LVF came from a Soviet communique which spoke of their forces being stopped by the sacrifice of "two French divisions".

Within a month, a new recruiting drive was begun in Vichy France. It attracted 3000 applicants, mostly members of collaborating militias and university students. This unit, the 8th SS Volunteer Sturmbrigade France was led by a former Foreign Legionnaire, Obersturmbannführer Paul Marie Gamory-Dubourdeau. The 1st battalion of about 1000 men was attached to SS Division Horst Wessel and sent to Galicia to fight the Soviet advance. In fierce fighting the battalion suffered heavy casualties.

In September 1944, a new unit, the Waffen-Grenadier-Brigade der SS Charlemagne (französische Nr.1), also known as the "Französische Brigade der SS" was formed out of the remnants of the LVF and French Sturmbrigade, both of which were disbanded. Joining them were French collaborators fleeing the Allied advance in the west, as well as Frenchmen from the German Navy, the National Socialist Motor Corps (NSKK) and Organisation Todt, a construction unit and the Vichy French Milice. Some sources claim that the unit also included volunteers from some French colonies and Switzerland. Brigadeführer Gustav Krukenberg took actual command with Puaud (now an SS Oberführer) as nominal French commander.

The two main infantry regiments were Waffen-Grenadier Regiment der SS 57 and 58. Veterans of the Sturmbrigade were the nucleus of Regiment 57 and the LVF formed the core of Regiment 58. The LVF also manned the artillery battalion, the headquarters company and the engineer company. The reaction of the LVF to their transfer into the SS was mixed.

In early 1945, Oberführer Puaud received assurance from Reichsführer-SS Heinrich Himmler that his men would not be sent to the western front, where they might fight fellow Frenchmen. He was also told that they would fight under the French flag and continue to have Catholic military chaplains. Himmler promised that France would regain its sovereignty after Germany's victory.

In February 1945, the unit was officially upgraded to a division and renamed 33. Waffen-Grenadier-Division der SS "Charlemagne". However, this division was severely undermanned with only 7340 men. The Charlemagne Division was sent to fight the Red Army in Poland, but on 25 February it was attacked while deploying from the railhead at Hammerstein (present day Czarne) in Pomerania by troops of the Soviet 1st Belorussian Front. Opposing the Frenchmen were four Red Army infantry divisions and two tank brigades. The lightly armed French troops had not re-equipped prior to their departure, and they had no radios and few maps. The only bright spot for the Frenchmen was that they managed to stop the tanks with Panzerfausts.

On the night of 3 March, the Charlemagne survivors were sent to defend the nearby town of Körlin with orders to "hold at all costs." At noon the next day, a strong Red Army force hit Körlin from the southwest. The French fought back desperately and were able to hold their positions throughout the day. The Division was ordered to immediately withdraw to the west, to avoid being trapped, and was broken into three battlegroups. Only the battlegroup commanded by Krukenberg survived, as they retreated to the Baltic coast, and were evacuated by sea to Denmark and later sent to Neustrelitz for refitting. Around 4,800 men had been lost. Oberführer Puaud was one of them. 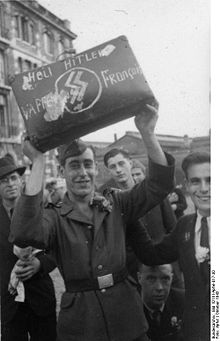 In early April 1945, Krukenberg now commanded only 700 men organized into a single infantry regiment with two battalions (Battalions 57 and 58) and one heavy support battalion, without equipment. He released about 400 men to serve in a construction battalion; the remainder, numbering approximately 300, had chosen to go to Berlin and conduct a delaying action against the approaching Soviet Army. The number of men in the Berlin unit is uncertain and may have been as few as 90.

On 23 April the Reich Chancellery in Berlin ordered Krukenberg to proceed to the capital with his men, who were reorganized as Sturmbataillon ("assault battalion") "Charlemagne". Between 320 and 330 French troops arrived in Berlin on 24 April after a long detour to avoid Soviet advance columns (The Soviets had been attempting to cross a bridge which was eventually blown up under them). Sturmbataillon Charlemagne was attached to the 11th SS Volunteer Panzergrenadier Division Nordland. The arrival of the French SS men bolstered the Nordland Division whose "Norge" and "Danmark" Panzergrenadier regiments had been decimated in the fighting. Both equaled roughly a battalion. Brigadeführer Krukenberg was appointed the commander of (Berlin) Defence Sector C on 25 April. This command included the Nordland Division, following the dismissal of its previous commander, SS-Brigadeführer Joachim Ziegler on the same day.[2]

The soldiers noted that the first night in Berlin was unnaturally quiet. They heard people dancing and laughing, but no sounds of fighting were audible. They walked from West to East Berlin, to a brewery near the Hermannplatz. Here the fighting began, with Hitler Youth firing Panzerfausts at Soviet tanks belonging to advance guards near the Tempelhof Aerodrome. Soon some members of the Sturmbataillon joined the Hitler Youth in tank hunting sorties.

Supported by Tiger II tanks and the 11th SS Panzer-Regiment 'Hermann von Salza', the Sturmbataillon took part in a counterattack on the morning of 26 April in Neukölln, a district in southeastern Berlin near the Sonnen Allee. The counterattack ran into an ambush by Soviet troops using a captured German Panther tank, although this may have been a 'friendly-fire' incident. The regiment lost half of the available troops in Neukölln on the first day. They later defended Neukölln's Town Hall. Given that Neukölln was heavily penetrated by Soviet combat groups, Krukenberg prepared fallback positions for Sector C defenders around Hermannplatz. He moved his headquarters into the opera house. As the Nordland Division fell back towards Hermannplatz the French SS and one-hundred Hitler Youth attached to their group destroyed 14 Soviet tanks with panzerfausts, and one machine gun position by the Halensee bridge managed to hold up any Soviet advances in that area for 48 hours.[3]

The Soviet advance into Berlin followed a pattern of massive shelling followed by assaults using battle groups of about 80 men each, with tank escorts and close artillery support. On 27 April, after a spirited but futile defence, the remnants of Nordland were pushed back into the centre government district (Zitadelle sector) in Defence sector Z. There Krukenberg's Nordland headquarters was a carriage in the Stadtmitte U-Bahn station.[4] Fighting was very heavy and by 28 April, approximately 108 Soviet tanks had been destroyed in the southeast of Berlin within the S-Bahn. Sixty-two of those were destroyed by the efforts of the Charlemagne Sturmbataillon alone, which was now under the commanded of Henri Joseph Fenet. Fenet and his battalion were given the area of Neukölln, Belle Alliance Platz, Wilhelmstrasse and the Friedrichstrasse to defend.[5]

Fenet, who was now wounded in the foot, remained with his battalion as they withdrew to the vicinity of the Reich Aviation Ministry in the centre government district under the command of SS-Brigadeführer Mohnke. For the success of the battalion during the Battle in Berlin Fenet was awarded the Knight's Cross of the Iron Cross on 29 April 1945 by Brigadeführer Mohnke.[5]

On 28 April, the Red Army started a full-scale offensive into the centre sector. Fighting was intense and the Sturmbataillon Charlemagne was in the center of the battle zone around the Reich Chancellery. Unterscharführer Eugene Vaulot, who had destroyed two tanks in Neukölln, used his Panzerfausts to claim six more Soviet tanks near the Führerbunker. He was awarded the Knight's Cross of the Iron Cross by Krukenberg during a candlelight ceremony on a subway platform on 29 April. Vaulot did not survive the battle.

The French Charlemagne SS were the last defenders of Hitler's Führerbunker, remaining at the bunker until 2 May to prevent the Soviets from capturing it on May Day.[6]

Reduced to approximately thirty able men, most members of the Sturmbataillon had been captured or escaped Berlin on their own, or in groups. Most of those who made it to France were denounced and sent to Allied prisons and camps. For example, Hauptsturmführer Henri Joseph Fenet (1919 in Ceyzériat - 2002), one of the last recipients of the Knight's Cross, was sentenced to 20 years of forced labour, and was released from prison in 1959. Others were shot upon capture by French authorities. General Leclerc was presented with a defiant group of 11-12 captured Charlemagne Division men.[7] The Free French General immediately asked them why they wore a German uniform, to which one of them replied by asking the General why he wore an American one (the Free French wore modified US army uniforms). The group of French Waffen-SS men was later executed without any form of military tribunal procedure.[8] For their grave site see Third Reich in Ruins: Memorial Sites.

Not all the survivors of the Division were as unrepentant as post-war Nazi apologists like Fénêt. In Marcel Ophuls' documentary The Sorrow and the Pity Christian de la Mazière, a surviving Charlemagne Sturmbataillon volunteer, was interviewed and asked why he joined the Waffen SS, and whether he regretted having done so. He replied that he was raised in a Rightist family before the war, and read right-wing dailies full of alarming news about Communist atrocities in the Soviet Union and Spain, and that he fell victim to the racial intolerance prevalent at the time. He openly expressed regret for his actions and acknowledged the shortcomings of the cause for which he had fought.

During their existence the units were known by various names including: