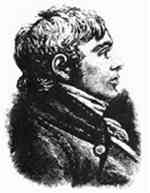 Robert Mills ( – , ) is sometimes called the first native born American to become a professional , though perhaps has a clearer claim to this honor. Mills studied in as a student of Irish-born architect who later designed the which became the official home of US presidents. Both Hoban and Mills were .

Born in , Mills moved to Philadelphia in 1802 where he became an associate and student of . He gradually became known in his own right. Some Philadelphia s that he designed are Washington Hall, Samson Street Church, and the Octagon Church. He also designed the Upper Ferry Bridge covering.

In 1812, Mills designed the in Virginia which was built to commemorate the death of several people in a nearby theater. This incident sparked his later interest in fireproofing measures.

Moving to Baltimore, he designed St. John's Episcopal Church, the Maryland House of Industry, and the Maryland Club. He is noted for designing the nation's first Washington Monument, in Baltimore, which began construction in 1815.

In 1836 he won the competition for the design of the which is his best known work.

He died in in 1855 and was buried at the Congressional Cemetery.

The broadest context for Mills' architecture was . This was the dominant style of building that was winning s and major projects of the time, both in Europe and in America. Under the umbrella of neoclassicism, his designs were partly Palladian, Georgian and often Greek Revival.

Apart from stylistic movements in architecture going on in the world at his time, Robert Mills was involved in the more local context of building in the . There, and especially in Washington D.C., were many figures contributing architecture of high quality. To build as Mills did on what is now the , he had to contend with the planning strictures of , as well as Andrew and . Being an architect of the now he was also undoubtedly influenced by and . Mills, with Jefferson and others, was able to create a distinctive federal style of architecture.