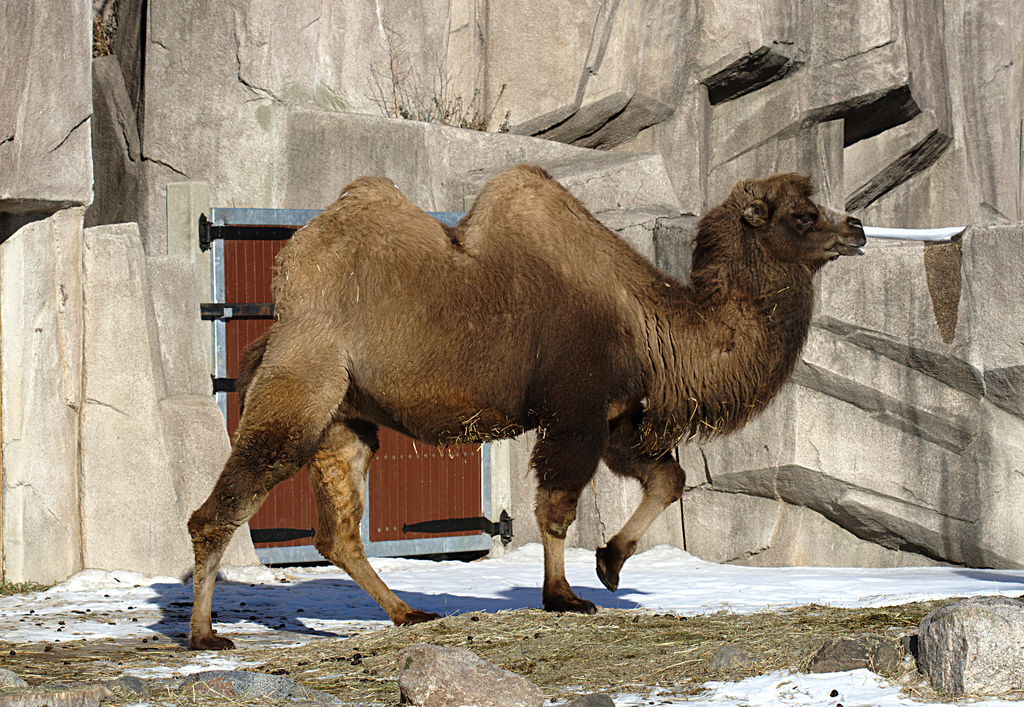 The Bactrian Camel ("Camelus bactrianus") is a large native to the s of north eastern . It is one of the two surviving species of . The Bactrian Camel has two humps on its back, in contrast to the single-humped Dromedary Camel. [The that allows you to remember the correct English word for each is this: "Bactrian" begins with "B", and "Dromedary" begins with "D" -- and "B" on its side has two humps, whilst "D" on its side has only one hump.]

Nearly all of the estimated 1.4 million Bactrian Camels alive today are domesticated, but in October the estimated 950 remaining in the wild in northwest and were placed on the critically list. [IUCN2007|assessors=Hare|year=2007|id=63543|title=Camelus ferus|downloaded=31 January 2008 Database entry includes justification for why this species is critically endangered]

It is thought that the Bactrian Camel was domesticated (independently from the dromedary) sometime before 2500 BC,

Bactrian Camels have been the focus of artwork throughout history. For example, western foreigners from the and elsewhere were depicted in (618&ndash;907).

There is some evidence that the Bactrian Camel can be divided up into different subspecies. In particular, it has been discovered that a population of wild Bactrian Camel lives within a part of the Gashun Gobi region of the . This population is distinct from domesticated herds both in genetic makeup and in behavior.

There are possibly as many as three regions in the genetic makeup that are distinctly different from domesticated camels and there is up to a 3% difference in the base genetic code. However, with so few wild camels, it is unclear what the natural genetic diversity within a population would have been.

Canadian researcher William Sommers found that these wild camels had the ability to drink saltwater slush, although it is not yet certain the camel can extract useful water from it. Domesticated camels do not attempt to drink salt water, though the reason is unknown.

The Bactrian Camel was identified as one of the top-10 "focal species" in 2007 by the Evolutionarily Distinct and Globally Endangered (EDGE) project. [Cite news | title = Protection for 'weirdest' species | url = http://news.bbc.co.uk/2/hi/science/nature/6263331.stm | date = 2007-01-16 | accessdate = 2007-05-22 | work = ] EDGE identifies species that are evolutionarily distinct and need better protection to prevent extinction. The Bactrian Camel was placed in the top-10 along with , , , Yangtze River dolphin, , , Pygmy Hippo, Bumblebee bat, and the .