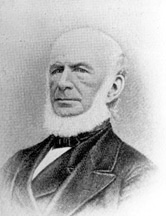 Lawrence Brainerd (, &ndash; , ) was a businessman, abolitionist and from . He was the father of Anne Eliza Brainerd Smith and the father-in-law of Vermont Governor .

Born in , he went to in 1803 to reside with an uncle and in 1808 moved with him to St. Albans, Vermont. He completed preparatory studies, taught school, was employed as a clerk in a mercantile establishment until 1816, and engaged in mercantile, banking, navigation, and railroad enterprises. In 1834 he was elected to the ; he was affiliated with the Whig Party until 1840, when he became a member of the Liberty Party. He was an unsuccessful candidate for Governor of Vermont in 1846, 1847, 1848, 1852, and 1854; he was elected as a member of the to the U.S. Senate to fill the vacancy caused by the death of and served from , , to , . He was not a candidate for reelection, and was nominated for Governor but declined. He resumed business activities and in 1870 died in St. Albans, Vermont; interment was in Greenwood Cemetery.

His son-in-law, J. Gregory Smith, founded and named after his father-in-law and wife.