Disability rights movement
Not to be confused with Disability studies.

The disability rights movement is the movement to secure equal opportunities and equal rights for people with disabilities. The specific goals and demands of the movement are: accessibility and safety in transportation, architecture, and the physical environment, equal opportunities in independent living, employment, education, and housing, and freedom from abuse, neglect, and violations of patients' rights.[1] Effective civil rights legislation is sought in order to secure these opportunities and rights.[1][2] 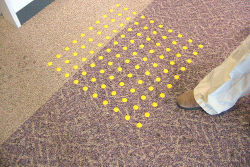 For people with physical disabilities accessibility and safety are primary issues that this movement works to reform. Access to public areas such as city streets and public buildings and restrooms are some of the more visible changes brought about in recent decades. A noticeable change in some parts of the world is the installation of elevators, automatic doors, wide doors and corridors, transit lifts, wheelchair ramps, curb cuts, and the elimination of unnecessary steps where ramps and elevators are not available, allowing people in wheelchairs and with other mobility impairments to use public sidewalks and public transit more easily and more safely.

Advocates for the rights of people with mental illnesses focus mainly on self-determination, and an individual’s ability to live independently.[3]

The right to have an independent life, using paid assistant care instead of being institutionalized, if the individual wishes, is a major goal of the disability rights movement, and is the main goal of the similar independent living and self-advocacy movements, which are most strongly associated with people with intellectual disabilities and mental health disorders. These movements have supported people with disabilities to live as more active participants in society.[4]

Access to education and employment have also been a major focus of the disability rights movement. Adaptive technologies, enabling people to work jobs they could not have previously, help create access to jobs and economic independence. Access in the classroom has helped improve education opportunities and independence for people with disabilities.

Freedom from abuse, neglect, and violations of patients' rights are also important goals of the disability rights movement. Abuse and neglect includes inappropriate seclusion and restraint, inappropriate use of force by staff and/or providers, threats, harassment and/or retaliation by staff or providers, failure to provide adequate nutrition, clothing, and/or medical and mental health care, and/or failure to provide a clean and safe living environment, as well as other issues which pose a serious threat to the physical and psychological well-being of a person with a disability. Violations of patients' rights include failure to obtain informed consent for treatment, failure to maintain the confidentiality of treatment records, and inappropriate restriction of the right to communicate and associate with others, as well as other restrictions of rights.

The disability rights movement began in the 1960s,[6] encouraged by the examples of the African-American civil rights and women’s rights movements.[7]

It was at this time that disability rights advocacy began to have a cross-disability focus. People with different kinds of disabilities (physical and mental handicaps, along with visual- and hearing-impairments) and different essential needs came together to fight for a common cause.[2]

In 1948, a watershed for the movement was the proof of the existence of physical and program barriers. The proof was provided as a specification for barrier free usable facilities for the handicap. The specifications provided the minimum requirements for barrier free physical and program access. An example of barriers are; providing only steps to enter buildings; lack of maintenance of walkways; locations not connected with public transit; lack of visual and hearing communications ends up segregating individuals with disabilities from independent, participation, and opportunities. The ANSI - Barrier Free Standard (phrase coined by Dr. Timothy J. Nugent, the lead investigator) called "ANSI A117.1, Making Buildings Accessible to and Usable by the Physically Handicapped", provides the indisputable proof that the barriers exist. It is based on disability ergonomic research conducted at the University of Illinois Urbana Champaign campus from 1946 to 1986. The research was codified in the ANSI A117.1 standard in 1961, 1971, 1980, and 1986. The standard is the outcome of physical therapists, bio-mechanical engineers, and individuals with disabilities who developed and participated in over 40 years of research. Easter Seals Education Committee Chairman Harold Wilke was tasked with assembling that diverse group in 1959. The standard provides the criteria for modifying programs and the physical site to provide independence. Applying the researched standards criteria presents reliable access and non-hazardous conditions. In October 2011 the standard turned 50 years old. The standard has been emulated globally since its introduction in Europe, Asia, Japan, Australia, and Canada, in the early 1960s. [8]

One of the most important developments of the disability rights movement was the growth of the independent living movement, which emerged in California in the 1960s through the efforts of Edward Roberts and other wheelchair-using individuals. This movement, a subset of the disability rights movement, postulates that people with disabilities are the best experts on their needs, and therefore they must take the initiative, individually and collectively, in designing and promoting better solutions and must organize themselves for political power. Besides de-professionalization and self-representation, the independent living movement's ideology comprises de-medicalization of disability, de-institutionalization and cross-disability (i.e. inclusion in the independent living movement regardless of diagnoses).[2]

In 1973 the (American) Rehabilitation Act became law; Sections 501, 503, and 504 prohibited discrimination in federal programs and services and all other programs or services receiving federal funds. Key language in the Rehabilitation Act, found in Section 504, states “No otherwise qualified handicapped individual in the United States, shall, solely by reason of his [sic] handicap, be excluded from the participation in, be denied the benefits of, or be subjected to discrimination under any program or activity receiving federal financial assistance.”[9][10] This was the first civil rights law guaranteeing equal opportunity for people with disabilities.[11]

Another crucial turning point was the nationwide sit-in in 1977 of government buildings operated by HEW (the U.S. Department of Health, Education and Welfare), conceived by Frank Bowe and organized by the American Coalition of Citizens with Disabilities,[6] that led to the release of regulations pursuant to Section 504 of the Rehabilitation Act of 1973. On April 5, 1977, activists began to demonstrate and some sat-in in the offices found in ten of the federal regions including New York City, Los Angeles, Boston, Denver, Chicago, Philadelphia, and Atlanta. The two most noteworthy protests occurred in San Francisco and Washington, D.C. The protesters demanded the signing of regulations for Section 504 of the Rehabilitation Act of 1973.[3][5] There were about 300 people in Washington, D.C. who marched to and then demonstrated inside the HEW building where Secretary Joseph Califano’s office was. He was the person who was to sign the regulations, but was delaying the process. Although he met with a few protest representatives, including Frank Bowe, he still did not sign. This action led many protesters to continue their sit-in overnight, but they then left after 28 hours.[3] The more successful sit-in occurred in San Francisco, led by Judith Heumann.[12] The first day of protests marked the first of a 25-day sit-in. Close to 120 disability activists and protesters occupied the HEW building. Califano finally signed on April 28, 1977. This protest was significant not only because its goal was achieved, but also because it was the foremost concerted effort between people of different disabilities coming together in support of legislation that affected the overall disability population, rather than only specific groups.[3][5] Prior to the 1990 enactment of the Americans with Disabilities Act, the Rehabilitation Act was the most important disability rights legislation in the United States.[4]

In 1978 disability rights activists in Denver, Colorado, organized by the Atlantis Community, held a sit-in and blockade of the Denver Regional Transit Authority buses in 1978. They were protesting the fact that city’s transit system was completely inaccessible for the physically disabled. This action proved to be just the first in a series of civil disobedience demonstrations that lasted for a year until the Denver Transit Authority finally bought buses equipped with wheelchair lifts. In 1983, Americans Disabled for Accessible Public Transit (ADAPT) was responsible for another civil disobedience campaign also in Denver that lasted seven years. They targeted the American Public Transport Association in protest of inaccessible public transportation; this campaign ended in 1990 when bus lifts for people using wheelchairs were required nationwide by the Americans with Disabilities Act.[9]

Another significant protest related to disability rights was the Deaf President Now protest by the Gallaudet University students in Washington, D.C. in March 1988. The 8-day (March 6 – March 13) demonstration and occupation and lock-out of the school began when the Board of Trustees appointed a new hearing President, Elisabeth Zinser, over two Deaf candidates. The students’ primary grievance was that the university, which was dedicated to the education of the hearing-impaired, had never had a Deaf president, someone representative of them. Of the protesters’ four demands, the main one was the resignation of the current president and the appointment of a Deaf one. The student demonstration consisted of about 2,000 participants who were not just students. The protests not only took place on campus, but they also took it to government buildings and marched through the streets. In the end, all the students’ demands were met and I. King Jordan was appointed the first Deaf President of the university.[5]

In 1990, the Americans with Disabilities Act became law, and it provided comprehensive civil rights protection for people with disabilities. Closely modeled after the Civil Rights Act and Section 504, the law was the most sweeping disability rights legislation in American history. It mandated that local, state, and federal governments and programs be accessible, that employers with more than 15 employees make “reasonable accommodations” for workers with disabilities and not discriminate against otherwise qualified workers with disabilities, and that public accommodations such as restaurants and stores not discriminate against people with disabilities and that they make “reasonable modifications” to ensure access for disabled members of the public. The act also mandated access in public transportation, communication, and in other areas of public life.

In the United Kingdom, following extensive activism by disabled people over several decades, the Disability Discrimination Act 1995 (DDA 1995) was passed. This made it unlawful in the United Kingdom to discriminate against people with disabilities in relation to employment, the provision of goods and services, education and transport. The Equality and Human Rights Commission provides support for this Act. Equivalent legislation exists in Northern Ireland, which is enforced by the Northern Ireland Equality Commission.

Although the disability rights movement itself began in the 1960s, advocacy for the rights of people with disabilities did exist before that, and so the list of notable organizations has been expanded to reflect that.

Note: this file is approximately 18.3 megabytes

This audio file was created from a revision of Disability rights movement dated 2009-04-20, and does not reflect subsequent edits to the article. (Audio help)
More spoken articles