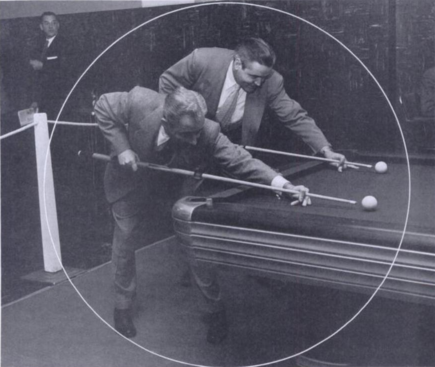 Willie Mosconi nicknamed "Mr. Pocket Billiards", (, &ndash; , ), born William Joseph Mosconi, was a American professional (pool) player from , and a Billiard Congress of America Hall of Fame member. Between the years of 1941 and 1957, he won the of pool an unmatched fifteen times. He is often regardedWeasel-inline|date=August 2008 as pool's greatest ambassador and his name is synonymous with pocket billiards. [http://home.bca-pool.com/displaycommon.cfm?an=1&amp;subarticlenbr=31] . Mosconi pioneered and regularly employed numerous s, set many records, and helped to popularize the game of billiards as a national recreation activity.

During the 1940s and 1950s, the pocket billiards game most often played in competition was called , or 14.1 continuous, a form of pool considered by most top players to be more difficult than today's championship game . Mosconi still holds the officially recognized straight pool high Cuegloss|Run|run record of 526 consecutive balls "(see below for more details)".

Willie's father Joseph Mosconi owned a pool hall that the family lived above. Joseph Mosconi was strongly opposed to Willie playing pocket billiards, preferring he become a performer. He tried to keep his young son away from the game by hiding the billiard balls, but Willie improvised by practicing with small potatoes from his mother's kitchen and an old broomstick

Mosconi was a and his father soon realized that his son's talent could help earn money for their growing family. His father began advertising challenge matches, and though Willie had to stand on a box in order to reach the table, he beat experienced players many years his senior.

In 1919, an exhibition match was arranged between six-year old Willie and the reigning World Champion, . The hall was packed, and though Greenleaf won that match, Willie played well enough to draw considerable attention and launch his career in professional billiards.

In 1924, at the tender age of eleven, Willie was the juvenile straight pool champion and was regularly holding trick shot exhibitions. [ [http://americanhistory.si.edu/archives/images/d9744-5.jpgImages] ] By the early-1930s Willie needed to take a brief hiatus from the game, but returned a couple years later in the hopes of earning some money.

Upon his return, Mosconi entered one local tournament after another and according to his autobiography, "Willie's Game"

In 1933, Mosconi competed in the (BCA) World Championship tournament. He nearly won the title but lost as he missed that single ball that could have made him the champion. , the tournament winner, ran the needed balls and won. [ [http://www.billiardsdigest.com/untold_stories/mosconi_6.php Weird Fluke] ] His performance garnered the attention of the president of who immediately hired the young phenom.

That same year Mosconi embarked on a hectic cross-country exhibition tour promoting Brunswick products. Mosconi was joined by his idol and then World Champion Ralph Greenleaf, who was at the top of his game. In the end the scoreline read 57 wins for Greenleaf and an astonishing 50 wins for the 20 year old Mosconi.

From 1940 to 1941, a league was sponsored by billiard halls with eight players, and a full round robin took place. Mosconi was sponsored by a hall in New York called McGirr's. He dominated this series, and ran 125 balls from the break five times when only two other players in history had ever done the same. He continued to dominate pool into the mid-1950s in a manner few have equalled, however he was beaten by Richard Roberts.

In 1944, Willie enlisted in the , having already spent several years working within the defense industry. When ended, he returned to a successful tournament career and renewed his affiliation with .

After suffering a stroke in 1956, Willie slowed down on his tournament appearances in order to recover. He later returned to the game at nearly 100%, once again winning the BCA World Championship, (1957).

Willie permanently retired from tournament play in 1966 but remained active in promoting the game. He consulted and appeared in several movies dealing with billiards, made game show appearances and wrote many articles on billiards.

Shortly before winning his first world championship in 1941, Willie married his first wife Ann Harrison. Shortly thereafter the first of his three children was born, William Jr., followed soon after by a daughter, Candace. The marriage ended in divorce.

During a world 14.1 championship match, when the score was 124 to 123, with Mosconi still at the table, the tournament coordinator wrote on the scoreboard, "It's a boy," letting Mosconi know about the birth of his son. Willie smiled and then executed a brilliant five-rail bankshot for the win. Willie married Flora Marchini in 1953. Their daughter Gloria was born in 1954. Flora remained married to Willie until his death in 1993.

Willie set the world record by running 526 consecutive balls without a miss during a straight pool exhibition on , . To this day the record has not been toppled and many speculate it may never be bested. A handwritten and notarized

The record was set on a 4 foot x 8 foot Brunswick pool table with 4 3/4 inch pockets at the East High Billiard Club in . However, today's standard for tables is much more difficult to play on than Mosconi's table, as today's standard tables are 9 foot x 4 1/2 foot with 4 1/2 inch pockets.

Mosconi was the on the 1961 movie "The Hustler"

Mosconi also had a cameo role as a "stakes holder" during the first match-up between the film's characters "Fast Eddie" Felson and "Minnesota Fats". Actor (Fats) can be heard saying "Willie, hang on to that." when the match is commenced. At various points in the film, a keen eye can spot Mosconi in the audience watching the match go down.

The documentary short "", featured on "The Hustler" Special Edition DVD revealed that whenever the camera cut to Fast Eddie's hands it was really Mosconi taking the shot. (However, claims that the only shot Mosconi took was the masse shot during Fast Eddie's rematch with Fats).

, - Theatrical release of "The Hustler", a film which Mosconi acted as technical advisor and had a small cameo role.

, - Mosconi was a contestant on the television game show "I've Got a Secret".

, - Mosconi was a contestant on the television game show "What's my line?".

, - Willie played a sportscaster in the film "The Baltimore Bullet"

, - Willie played his last challenge match, against at the tribute dinner show. The event was hosted by the Birkbeck Twins at the Williamson Restaurant in Horsham, Pennsylvania. Both players were stopped every couple of racks for interviews.

Throughout the seventies and eighties Willie made several television appearances competing in challenge matches with other legends such as Jimmy Caras, Luther Lassiter, Irving Crane, Joe Balsis and "Minnesota Fats" Wanderone. Many of these shows aired on the ABC and the fledgling network.

In 1994, The Mosconi Cup, an annual pool competition between American and European players, was founded in Willie's honor. The event has been held in December of every year since then and is more popular than ever. The Mosconi Cup is considered the of the billiard world, and players strive to become a member of their respective countries' teams.