Unlike the other service academies, admission to the academy is based solely upon merit and does not require a congressional nomination. Students are officers-in-training and are referred to as cadets. Tuition for cadets is fully funded by the Coast Guard in exchange for an obligation of five years active duty service upon graduation. This obligation increases if the cadet chooses to go to flight school or graduate school. Approximately 400 cadets enter the academy each summer with about 200 cadets graduating. Graduates are commissioned as ensigns. The academic program grants a Bachelor of Science degree in one of eight majors, with a curriculum that grades cadets' performance upon a holistic education of academics, physical fitness, character and leadership. Cadets are required to adhere to the academy's Honor Concept, "Who lives here reveres honor, honors duty", which is emblazoned in the halls of the academy's entrance.

The academy's motto is Scientiæ cedit mare, which is Latin for "the sea yields to knowledge" (the trident, emblem of the Roman god Neptune, represents seapower).

Historic photograph of the USRC Dobbin

The roots of the academy lie in the School of Instruction of the Revenue Cutter Service, the school of the Revenue Cutter Service. Established near New Bedford, Massachusetts in 1876, the School of Instruction used the USRC Dobbin for its exercises. Captain John Henriques served as superintendent from the founding until 1883. The one civilian instructor was Professor Edwin Emery, who taught mathematics, astronomy, English composition, French, physics, theoretical steam engineering, history, and international law, and revenue law, among other subjects.[1] The School was basically a two-year apprenticeship, supplemented by a little classroom work. The student body averaged five to 10 cadets per class. With changes to new training vessels, the school moved to Curtis Bay, Maryland in 1900 and then again in 1910 to Fort Trumbull, a Revolutionary War–era Army installation near New London, Connecticut. In 1914 the school became the Revenue Cutter Academy, and with the 1915 merger of the Revenue Cutter Service and the Life Saving Service, it became the Coast Guard Academy.

The town of New London donated its current location above the west bank of the Thames River in 1932. In 1947, the academy received as a war reparation from Germany the barque Horst Wessel, a 295-foot tall ship which was renamed the USCGC Eagle. It remains the main training vessel for cadets at the academy as well as for officer candidates as the Coast Guard's Officer Candidate School, which located on the grounds of the USCGA.

The academy was racially integrated in 1961, at the behest of President Kennedy. 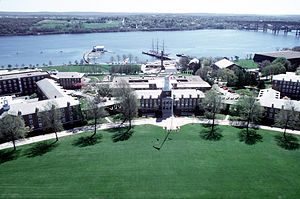 Unlike the other service academies, admission to the USCGA is solely based upon merit and does not require a congressional nomination. This is due to the fervent objections of Captain John A. Henriques, the first Superintendent of the Revenue Cutter School of Instruction (later the Revenue Cutter Academy). His objection stemmed from years of poor political appointments in the U.S. Revenue Cutter Service's bureaucracy. Since his objections, it has been the policy of the academy to base all appointments solely on the merits of the applicants.[2]

The academy is regularly cited as being one of the most difficult American institutions of higher education in which to gain entrance.[3] Each year more than 2,500 students apply and 400 are selected. About 280 of those 400 selectees accept their appointment and report to the USCGA in early July for "Swab Summer", a basic military training program designed to prepare them for the rigors of their Fourth Class year. Each cadet takes two semesters of classes during the school year and then spends the majority of the summer in military training. After four years of study and training, approximately 200 cadets will graduate with a Bachelor of Science degree and be commissioned as ensigns in the United States Coast Guard, to begin serving their five years of obligatory duty.

Student are referred to as cadets, and the student body is the Corps of Cadets. A little more than 30 percent of cadets are women.

While Superintendent of the academy, in 1929 Vice Admiral Harry G. Hamlet composed the academy's mission statement. All entering cadets must memorize the mission during their first few days of Swab Summer, the indoctrination period for new cadets.

The mission of the United States Coast Guard Academy is to graduate young men and women with sound bodies, stout hearts and alert minds, with a liking for the sea and its lore, and with that high sense of Honor, Loyalty and Obedience which goes with trained initiative and leadership; well-grounded in seamanship, the sciences and the amenities, and strong in the resolve to be worthy of the traditions of commissioned officers in the United States Coast Guard, in the service of their country and humanity.[4] 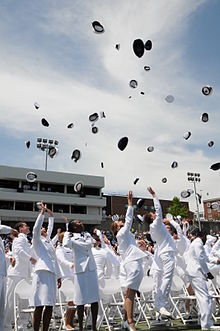 All cadets earn commissions as Coast Guard officers as well as Bachelor of Science degrees. For that reason the academy maintains a core curriculum of science and professional development courses in addition to major-specific courses. Academic work is interspersed with military training to produce officers of character with the requisite professional skills. Among these are courses in leadership, ethics, organizational behavior, and nautical science. The majority of cadets report to their first units after graduating, as either deck watch officers or engineering officers of the watch. Nautical science courses help prepare cadets in piloting, voyage planning, deck seamanship, and all aspects of shiphandling.

Academics at the USCGA stress the sciences and engineering, but different courses of study are available. In addition, several of the majors offer tracks of specialization (for example, Marine and Environmental Science majors can choose to focus on biology, chemistry, or geophysics). Cadets sometimes opt to take elective courses with Connecticut College (adjacent the academy's campus) as part of an open exchange agreement. 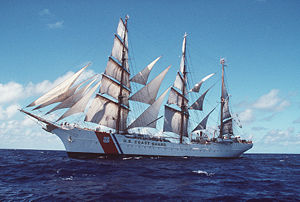 The barque USCGC Eagle (WIX-327), the United States' only active duty tall ship. The ship is used by the USCGA as a sail training ship.

Each summer, cadets participate in training programs according to their class. The summers are organized as follows:[6]

Each week during the school year cadets participate in Regimental Review, a formal military drill. In addition, cadets perform a variety of military duties at the academy. Like all cadets and midshipmen at the United States service academies, Coast Guard cadets are on active duty in the military and wear uniforms at all times. Cadets receive a monthly stipend to pay for books, uniforms, and other necessities.

Organization of the Corps of Cadets

The Corps is organized as one regiment divided into eight companies, each of which is composed of about 120 cadets of all classes. Although the Corps of Cadets is supervised directly by the Commandant of Cadets (a Coast Guard officer with the rank of captain), the academy operates on the concept of "the Corps leading the Corps."

The Corps of Cadets is largely a self-directed organization that follows a standard military chain of command:[7]

The highest-ranking cadet in each company is the Company Commander, a first-class cadet ("firstie"), equivalent to a senior. Although each company has some leeway in their standards and practices, every company commander reports to the Regimental Staff who plan and oversee all aspects of cadet life. At the top of the cadet chain of command is the Regimental Commander, the highest ranking cadet. Command positions, both in companies and on Regimental Staff, are highly competitive, and a cadet's overall class rank is often a deciding factor in who is awarded the position.

This organizational structure is designed to give every cadet a position of leadership and to emulate the structure of a Coast Guard cutter, in which the division officer and department head positions are filled by junior officers. Third-class cadets directly mentor the fourth-class in their division, just as junior petty officers would be responsible for the most junior enlisted personnel (non-rates). Second-class cadets act as non-commissioned officers, and ensure that the regulations and accountability are upheld. Firsties (like junior officers) are in supervisory roles, and are responsible for carrying out the mission of their divisions and ensuring the well-being of those under their command. Exchange cadets from the other federal service academies are also a part of the Corps, and take part in many activities alongside their USCGA counterparts.[8]

Cadets devote two hours per academic day to athletic activities, either on varsity teams, club teams, or other sports pursuits. The academy nickname is the Bears, after the USRC Bear, which made a dramatic rescue in Alaska in 1897, shortly after the opening of the academy.

In 1926, then-Cadet Stephen Evans (a future superintendent of the academy) brought a live bear to the academy and named it Objee for "Objectionable Presence." The tradition of keeping a live bear as the mascot was continued until the City of New London petitioned for its removal in 1984. The athletic facilities have been undergoing major upgrades since 2004, when the state-of-the-art FieldTurf synthetic surface was installed at Cadet Memorial Field (home of the football and soccer teams).

The academy maintains a sailing fleet of over 150 vessels to support the offshore sailing and dinghy sailing teams, in addition to the summer sail training programs. In 2007, a USCGA cadet, then a freshman sailor from the class of 2011, Krysta Rohde was featured in the "Faces in the Crowd" section of the December 27th edition of Sports Illustrated. That year Rohde gained recognition by being the first academy cadet and second freshman ever to win the ICSA Women's Singlehanded National Championship.

The academy has an unofficial rivalry with neighboring Connecticut College. The rivalry is most evident during the Coast Guard–Connecticut College biannual club hockey game which draws large numbers of spectators from both schools.

In 2006, the men's rugby club won the Division II National Championship at Stanford, California, after defeating the University of Northern Colorado.

Non-athletic activities also abound. Principal among them are the musical activities, centered on Leamy Hall. Regimental Band, Windjammers Drum & Bugle Corps, various pep bands, and the NiteCaps Jazz Band are some of the instrumental programs. Chapel Choirs, Glee Club, the Fairwinds all-female a cappella group, and The Idlers all-male sea shanty group are some of the vocal programs.

Also of note is the academy's Model UN team, which was started in 2004, and has since been successfully competing around North America, and at the World Model UN Conference.

Multiple clubs are offered to students at the academy to help assist them in networking with others. All clubs are non-discriminating and offer insight into many cultures or sports based on the club theme.

Links in the Chain

For years it has been a United States Coast Guard Academy tradition for fourth-class cadets (freshman) to hide the chain links that sit outside the cadet library, also known as Waesche Hall. The chain links are historic: they were used during the Revolutionary War to prevent ships from transiting up the Hudson River and attacking West Point. When Benedict Arnold betrayed the United States, the chain links were one of the secrets that he revealed to the British. The family that originally forged the chain donated the links to the United States Coast Guard Academy. Since the donation, the fourth class is challenged each year at the annual homecoming football game to outwit the second class (juniors) and keep the chain hidden until half-time. If the fourth class is successful in hiding the links until the end of the second quarter, it is granted some sort of reward such as carry-on.