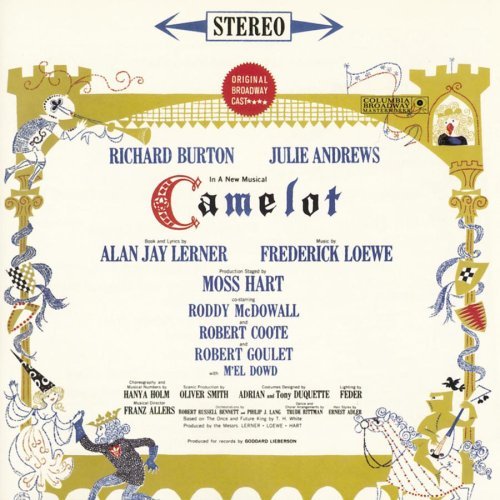 "Camelot" is a musical by (book and lyrics) and (music). It is based on the legend as adapted from the novel "".

The original 1960 production, directed by , ran on Broadway for 873 performances, winning four s and spawning several revivals, foreign productions and a 1967 film version. The original cast album was America's top-selling LP for 60 weeks.

In 1959, and decided to adapt T. H. White's "Once and Future King" as their next project. As discussed in Lerner's 1978 book, "The Street Where I Live", , who had no interest in the project, agreed to write music, with the understanding that if things went badly, it would be his last score. [Lerner, p. 190] After the tremendous success of "", expectations were high for a new musical. However, the show's production met several obstacles. Lerner's wife left him during the writing process, [Lerner, p. 204] causing him to seek medical attention and delaying the production. When "Camelot" began rehearsals, it still needed considerable work. However, the producers were able to secure a strong cast including , and , as well as in his first Broadway role. , also making his Broadway debut, later replaced McDowall during the Broadway run.

The show's first tryout was in Toronto, at the in 1960. The curtain came down at twenty minutes to one in the morning; Lerner later noted that "Only "Tristan and Isolde" equaled it as a bladder endurance contest." [Lerner, p. 214] The morning papers, though kind, hinted that the show needed much work in order to succeed. Lerner was hospitalized with a bleeding ulcer and had to withdraw from preparations for a time. Hart then suffered a heart attack, and Lerner stepped in as temporary director for the rest of the out-of-town run at the behest of . "Camelot" then moved to Boston, nearly an hour and a half shorter, but still running very long. The production team tried to find another director, even phoning , who could not undertake the job. [Lerner, p. 223] Lerner and Loewe disagreed on how to proceed with the show, as Loewe did not want to make any major changes without Hart's guidance. Lerner wrote: "God knows what would have happened had it not been for Richard Burton." Accepting cuts and changes, he radiated a "faith and geniality" and calmed the fears of the cast. [Lerner, pp. 230–31] Guenevere's song "Before I Gaze at You Again" was given to Andrews at the last minute before the first New York preview, which provoked her famous quote, "Of course darling, but do try to get it to me the night before." [Lerner, p. 232] After the show opened on Broadway, Hart was released from the hospital, and he and Lerner began cutting the play even further. Two songs, "Then You May Take Me To the Fair" and "Fie on Goodness," were cut.

The advance sale for the show was the largest in Broadway history.

Since then, "Camelot" has been associated with the Kennedy administration. [ [http://www.bard.org/education/resources/other/camelotmoment.html Information from Bard College website] ]

The obstacles encountered in producing "Camelot" were hard on the creative partnership of , and the show turned out to be their last collaboration. "Camelot" was also Hart's last Broadway show. He died of a heart attack in Palm Springs, California on , . ["New York Times", December 21, 1961]

On , after two previews, the show opened on Broadway at the . The production was directed by and ran for 873 performances, winning four s. The original cast album was America's top-selling LP for 60 weeks.

The London production opened in August 1964 at the and featured as Arthur, as Guenevere and Barry Kent as Lancelot. It played for 518 performances. The film version was made in 1967 starring and .

Richard Burton reprised his role as Arthur in a revival that ran during the summer of 1980 at the at . played Guenevere, and was Lancelot.

The show was revived on Broadway at the in November 1981 and broadcast on a year later, starring as Arthur, Meg Bussert as Guenevere, and Richard Muenz as Lancelot. Harris, who had starred in the film, and Muenz also took the show on tour nationwide. Another Broadway revival played in June 1993 for 56 performances at the , with Goulet now cast in the role of Arthur. Goulet reprised this role at Toronto's O'Keefe Centre in 1993.

A U.S. Regional tour, starring Michael York as Arthur, James Barbour as Lancelot, and as Guenevere, kicked off on and continues in 2008. Alan Jay Lerner's son, , contributed changes to the libretto, and Glenn Casale directs. The cast also includes as Mordred and Eric Anderson as Merlyn. Notable cast replacements include as Arthur, Matt Bogart as Lancelot, and Rachel De Benedet as Guenevere. [ [http://www.playbill.com/news/article/103362.html Playbill news] ] From June 27-30, 2007, the tour played at Toronto's Hummingbird Centre, formerly the O'Keefe Centre, where the musical had premiered in 1960. [ [http://www.hummingbirdcentre.com/show_camelot.html Notice for the 2007 Toronto tour stop] ]

From May 7 to , , the presented five semi-staged concerts of "Camelot" directed by and produced by . The cast starred as , as Guenevere, and opera singer as Lancelot. It also featured as Pellinore, as Lionel, as Mordred, as Sagramore, Christopher Seiber as Dinadan and as Morgan le Fey. The May 8 performance was broadcast nationally on "" on PBS. [ [http://www.broadway.com/gen/Buzz_Story.aspx?ci=562988 2008 Broadway.com article] ]

King Arthur is nervous about his upcoming arranged marriage and is hiding in a tree. Merlyn, his wise tutor, calls Arthur down to warn the young king that he won't be around much longer. Merlyn, who lives backwards in time and remembers the future as well as the past, knows he will soon be separated from Arthur. Merlyn persuades Arthur to climb down by asking him what his subjects would think if they saw him in a tree ("I Wonder What the King is Doing Tonight?"). Arthur hears someone coming and scampers up the tree again. Guenevere comes to the woods, uncertain about herself and her future ("Simple Joys of Maidenhood"). She stumbles into Arthur, who initially calls himself "Wart" (his childhood nickname) and then, hearing of her reluctance to marry, tells her of the joys of life in Camelot ("Camelot"). When his attendants come upon the two of them, he is revealed as the King. He tells Guenevere the story of how he pulled the sword from the stone and became king, and she, charmed by the story, agrees to marry him.

The wizard Merlyn is fatefully drawn into the cave of the nymph Nimue for his eternal sleep ("Follow Me"). Arthur is inspired to establish the Round Table of chivalrous knights who fight for the right. When news of this reaches young Lancelot in France five years later, he is determined to come to Camelot and join Arthur's knights ("C'est Moi"). King Pellinore also arrives. A May Day celebration takes place on the castle grounds ("The Lusty Month of May"), where Arthur introduces his wife to Lancelot. Guenevere takes an instant dislike to the cocky young man and incites three knights of the Round Table to engage him in a jousting match ("Then You May Take Me to the Fair"). Arthur is dismayed by this and at a loss to understand a woman's way ("How to Handle a Woman").

In the jousting match Lancelot easily defeats all three knights. He appears to kill the third, Lionel, with an errant sword thrust, but the dismay of the crowd turns to awe and adoration as he "miraculously" restores the mortally wounded knight to life. This adoration extends to Guenevere, who is forced to re-evaluate her feelings about the passionate young knight ("Before I Gaze at You Again"). Lancelot falls in love with the Queen and is torn by the conflict between this love and his devotion to Arthur. Arthur makes Lancelot a Knight of the Round Table. Arthur is painfully aware of the feelings between Lancelot and Guenevere but remains silent to preserve the tranquility of Camelot. He asks permission to leave Camelot for foreign conquests.

Several years later, Guenevere and Lancelot are still tormented by their unfulfilled love. He finally reveals his feelings to her ("If Ever I Would Leave You"). They both believe that Arthur is not aware of it. Nevertheless, she remains faithful to Arthur, and helps him in carrying out the affairs of State.

Mordred, Arthur's illegitimate son, comes to Camelot to dishonour the King and try to gain the throne for himself. Arthur puts him in the knights’ training program, not knowing that Mordred is there to destroy the Round Table ("Seven Deadly Virtues"). Arthur begins to feel the strain of ruling England and wonders "What Do the Simple Folk Do" without any such responsibilities. A month later, Mordred has done a great deal of damage to the court by causing dicontentment among the knights ("Fie on Goodness!"). He schemes with his sorceress-aunt, Morgan le Fey, to trap Arthur in a forest one night ("The Persuasion"). During this night, Lancelot visits Guenevere in her chambers, where she reveals her love for him and kisses him ("I Loved You Once in Silence"). Mordred and some of the Knights of the Round Table interrupt, accuse Lancelot of treason, and imprison him. Lancelot escapes, but Guenevere is sentenced to burn at the stake ("Guenevere"). At the execution, Arthur watches from a distance, torn between upholding his law (as Mordred urges) and sparing Guenevere. At the last moment, Lancelot rescues her and takes her off with him to France.

For the sake of his own honour and that of Camelot, Arthur must now wage war against France. Mordred has taken up an army against Arthur. The war takes a terrible toll on Camelot, as half or more of the Knights of the Round Table are killed. Before the final battle, Arthur meets Lancelot and Guenevere, latter of whom has joined a convent and become a nun. They offer to face up to justice in England, but he will not see her burned; he forgives them both. That night in camp, Arthur meets a young stowaway named Tom who has come to join the Round Table. Arthur knights him on the field of battle with Excalibur and sends him back to England to grow up there and pass on to future generations the ideals of chivalry and Camelot ("Camelot" reprise).

The New York critics' reviews of the original production were mixed.