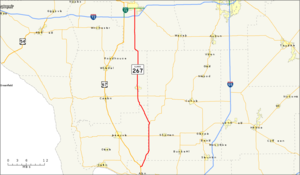 Illinois Route 267 is a north-south in the of . It runs from and in Godfrey north to and Business (abbreviated BL 72) in Jacksonville. This is a distance of 59 miles (95 km).

Illinois 267 is a two-lane surface road for its entire length. It runs through the small towns of Brighton, Medora, Rockbridge and Greenfield.

The routing of Illinois 267 over its lifetime is directly related to the routing of U.S. 67 since the 1950s. This is because U.S. 67 has been used at times over both the western route through Carrollton and Jerseyville, and the eastern route through Brighton and Greenfield, with various alternates to U.S. 67 being used on the other routing during these times.

Around 2006, IDOT completed the U.S. 67 bypass south of I-72. U.S. 67 was then moved onto this new segment, and Illinois 267 extended north from Murrayville to Business I-72 in Jacksonville.