Cocker spaniel refers to two modern breeds of dogs of the spaniel dog type: the American Cocker Spaniel and the English Cocker Spaniel, both of which are commonly called simply Cocker Spaniel in their countries of origin. It was also used as a generic term prior to the 20th century for a small hunting Spaniel. Cocker spaniels were originally bred as hunting dogs in the United Kingdom, with the term "cocker" deriving from their use to hunt the Eurasian Woodcock. When the breed was brought to the United States it was bred to a different standard which enabled it to specialize in hunting the American Woodcock. Further physical changes were bred into the cocker in the United States during the early part of the 20th century due to the preferences of breeders.

Spaniels were first mentioned in the 14th century by Gaston III of Foix-Béarn in his work the Livre de Chasse. The "cocking" or "cocker spaniel" was first used to refer to a type of field or land spaniel in the 19th century. Prior to 1901, Cocker Spaniels were only separated from Field Spaniels and Springer Spaniels by weight. Two dogs are considered to be the foundation sires of both modern breeds, the English variety are descended from Ch. Obo, while the American breed descends from Obo's son, Ch. Obo II. In the United States, the English Cocker was recognized as separate from the native breed in 1946; in the UK, the American type was recognized as a separate breed in 1970. In addition, there is a second strain of English Cocker Spaniel, a working strain which is not bred to a standard but to working ability. Both breeds share similar coat colors and health issues with a few exceptions. 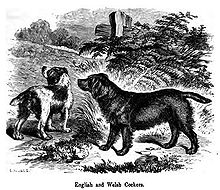 A drawing of English and Welsh Cockers, from John Henry Walsh's (under the pseudonym "Stonehenge") 1859 work The Dog in Health and Disease

While their origins are unknown, "spaynels" are mentioned in 14th century writings.[1] It is commonly assumed that they originated in Spain, and Edward of Norwich, 2nd Duke of York in his 15th century work The Master of Game introduces them as "Another kind of hound there is that be called hounds for the hawk and spaniels, for their kind cometh from Spain, notwithstanding that there are many in other countries."[2] The Master of Game was mostly an English translation of an earlier 14th century Old French work by Gaston III of Foix-Béarn entitled Livre de Chasse.[3]

In 1801, Sydenham Edwards wrote in Cynographia Britannica that the "Land Spaniel" is divided into two types: the hawking, springing/springer and the cocking/cocker spaniel.[4] The term "cocker" came from the dog's use in hunting Woodcocks.[5] During the 19th century the term "cocker spaniel" was used to describe a type of small Field Spaniel, which at the time was also a general term to describe a number of different spaniel hunting breeds including the Norfolk Spaniel, Sussex Spaniel and Clumber Spaniel. While there were no Sussex Cockers or Clumber Cockers, there were dogs known as Welsh Cockers and Devonshire Cockers.[6] The Welsh or Devonshire were considered cockers until 1903 when they were recognized by The Kennel Club as the Welsh Springer Spaniel.[7] 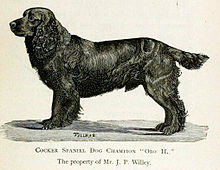 Prior to the 1870s, the only requirement for a dog to be classed as a Cocker Spaniel was that it needed to weigh less than 25 pounds (11 kg), although breeders separated the cocker from the King Charles Spaniel which remains a smaller breed of spaniel.[8] This maximum weight limit remained on the Cocker Spaniel until 1901, with larger dogs being classed as Springer Spaniels.[9] The colors of the Devonshire and Welsh Cockers were described by John Henry Walsh under the pseudonym Stonehenge in his book The Dog in Health and Disease as being a deeper shade of liver than that of the Sussex Spaniel.[10] Following the formation of The Kennel Club in the UK in 1873, efforts were made by breeders to record the pedigrees of cockers and springers. In 1892, English Cocker Spaniels and English Springer Spaniels were recognized as separate breeds by The Kennel Club.[11]

There are two dogs which are thought to be the foundation sires of both modern breeds of cocker spaniels. Ch. Obo is considered by breed enthusiasts to be the father of the modern English Cocker Spaniel, while his son, Ch. Obo II, is considered to be the progenitor of the American Cocker Spaniel.[12] Obo was born in 1879, at which point registration as a cocker was still only by size and not by ancestry. He was the son of a Sussex Spaniel and a Field Spaniel.[7] Although Obo was an English dog, Obo II was born on American shores – his mother was shipped to the United States while pregnant.[12] During his lifetime, it was claimed in advertisements that Obo II was the sire or grandsire of nearly every prize winning cocker in America.[13]

A graph showing the height and shape difference between the American and English Cocker.

There are two modern breeds of cocker spaniel, the English Cocker Spaniel and the American Cocker Spaniel.[14] They were bred as gun dogs; to use their sense of smell to cover low areas near the handler in order to flush birds into the air to be shot, and to use their eyes and nose to locate the bird once downed, and then to retrieve the bird with a soft mouth.[15] The major differences between the English and American varieties is that the American is smaller with a shorter back, a domed head and a shorter muzzle, while the English variety is taller with a narrower head and chest.[14]

Rare colors can appear unexpectedly in certain lines, for instance while an all-white cocker is usually bred by selective breeding of very light golden strains, they can still appear very uncommonly to parents who are dark colored. A noted occurrence of this happened in 1943, when a grandson of My Own Brucie, Best in Show at the Westminster Kennel Club Dog Show in 1940 and 1941, was born all-white.[19] 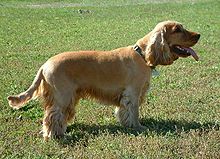 A golden English Cocker Spaniel of the show strain

The English Cocker Spaniel is the most successful breed at the most popular dog show in the UK, Crufts, with seven best-in-show wins since the prize was first awarded in 1928. This was mostly due to the success of dog breeder H.S. Lloyd's Ware Kennel, dogs of which won best-in-show on six occasions between 1930–1950.[24] They are the second most popular dog breed in the UK according to statistics released by the KC with 22,211 registrations in 2009, beaten only by the Labrador Retriever with 40,943. In third place was the English Springer Spaniel with 12,700.[25] The English Cocker's popularity has increased steadily since 1999 in the United States when they were ranked 76th in registrations by the AKC, to 2009 when they were ranked 66th.[20]

There are physical differences between the show strains and working strains in the UK. While the show strain is bred to the conformation standard, the working strain is bred for working ability and as such several physical differences have appeared. Working type dogs tend to be larger with flatter heads and shorter ears. The coat also tends to be finer than the show variety and have less feathering.[26] 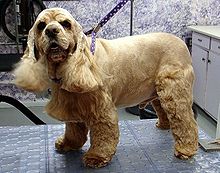 The American Cocker Spaniel was bred smaller as American Woodcocks are smaller than their European cousins, and the breeds appearance changed slightly during the first part of the 20th century as the preference by American breeders was for a more stylized appearance.[7] The standard size according to the AKC is between 14.5–15.5 inches (37–39 cm) at the withers for males and 13.5–14.5 inches (34–37 cm) for females.[28] The weight of the breed is on average between 24–30 pounds (11–14 kg).[29]

At the Westminster Kennel Club Dog Show, the most prestigious dog show in the United States,[30] the American Cocker Spaniel has won best-in-breed on four occasions since its first award in 1907. The most successful breed is the Wire Fox Terrier with thirteen wins.[31] The American Cocker Spaniel is judged in three separate breed classes under AKC rules; "black", "parti-color", and "any solid color other than black..." (ASCOB).[32]

In a survey conducted by the Kennel Club (UK), the American Cocker Spaniels had a median age of death of ten years and four months,[33] while the English Cocker Spaniel had a median age of eleven years and two months.[34] According to the survey, the most common cause of death for both breeds was cancer, while old age was the second most common cause.[33][34] The two modern breeds are susceptible to several health problems. Issues common to the two breeds include ear infections, and a variety of eye problems. A large number of breeds are susceptible to hip dysplasia. in a survey conducted by Orthopedic Foundation for Animals, the American Cocker Spaniel was ranked 115th out of 157 different breeds, with 1 being the highest percentage dysplastic and 157 being the lowest percentage dysplastic. The English Cocker was ranked 129th.[35] 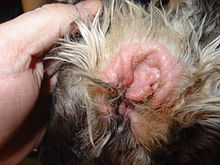 Severe otitis externa in a cocker spaniel, the ear canal is inflamed and swollen shut

Cocker spaniels and other dogs that have long, pendulous ears are more predisposed to ear problems than some other breeds. The fold of the ear can prevent air from entering, and it also creates a warm, moist environment where organisms can grow. Otitis externa is an inflammation of the ear canal which can be caused by a variety of factors including parasites, microorganisms, foreign bodies, tumors, and underlying dermatological disease. Ear mites can cause otitis externa; ticks and fleas can also live in dogs' ear canals.[36]

The most common canine ear problems are caused by microorganisms, especially yeast infections. The most common variety of this is Malassezia pachydermatitis. Symptoms can include the dog shaking its head or scratching at its ears more frequently. The ear canal will appear inflamed, a pus-like substance will be discharged in some cases, and the ear will smell quite pungent in most cases. Treatment for the more common causes of otitis externa in dogs often includes flushing the ears with an antibacterial solution. In some cases, anti-inflammatory medication is prescribed. Some conditions can increase the chance of ear infections, including living in a humid environment and frequent swimming or bathing without adequate drying of the ear afterwards.[36]

Progressive retinal atrophy (PRA) is a term given to several diseases which affect a dog's eyesight and can lead to blindness. It has been documented in a large number of different dog breeds including both the American and English Cocker Spaniels. The two types of Cockers are susceptible to a specific type of PRA called Progressive rod-cone degeneration (PRCD), symptoms include night blindness leading to total blindness between the ages of three and five.[37] PRCD is the most widespread hereditary retinal disease which may lead to blindness in dogs.[38]

Another leading cause of blindness is Canine glaucoma. This is an increase in the pressure of the fluid in the eye which, if left untreated, can cause visual impairment and eventual loss of sight. The condition can be inherited (Primary glaucoma) or a secondary condition to a variety of other eye issues including tumors or lens luxation.[39] Both breeds are affected by juvenile cataracts which can occur at up to four years of age. Symptoms can include discoloring of the pupil, and treatment may include surgery to remove the cataract.[40]