Maya architecture
This article is about pre-Columbian architecture of the Maya civilization. For the 20th-century revivalist architectural and decorative arts styling, see Mayan Revival.

A unique and spectacular style, Maya architecture spans several thousands of years. Often the most dramatic and easily recognizable as Maya are the stepped pyramids from the Terminal Pre-classic period and beyond. Being based on the general Mesoamerican architectural traditions these pyramids relied on intricate carved stone in order to create a stair-step design. Each pyramid was dedicated to a deity whose shrine sat at its peak. During this "height" of Maya culture, the centers of their religious, commercial and bureaucratic power grew into large cities, including Chichen Itza, Tikal, and Uxmal. Through observation of the numerous consistent elements and stylistic distinctions, remnants of Maya architecture have become an important key to understanding the evolution of their ancient civilization.

As Maya cities spread throughout the varied geography of Mesoamerica, the extent of site planning appears to have been minimal; their cities having been built somewhat haphazardly as dictated by the topography of each independent location. Maya architecture tends to integrate a great degree of natural features. For instance, some cities existing on the flat limestone plains of the northern Yucatán grew into great sprawling municipalities, while others built in the hills of Usumacinta utilized the natural loft of the topography to raise their towers and temples to impressive heights. However, some semblance of order, as required by any large city, still prevailed.

At the onset of large-scale construction, a predetermined axis was typically established in congruence with the cardinal directions. Depending upon the location and availability of natural resources such as fresh-water wells, or cenotes, the city grew by connecting great plazas with the numerous platforms that created the sub-structure for nearly all Maya buildings, by means of sacbeob causeways. As more structures were added and existing structures re-built or remodeled, the great Maya cities seemed to take on an almost random identity that contrasts sharply with other great Mesoamerican cities such as Teotihuacan and its rigid grid-like construction.

At the heart of the Maya city existed the large plazas surrounded by their most valued governmental and religious buildings such as the royal acropolis, great pyramid temples and occasionally ballcourts. Though city layouts evolved as nature dictated, careful attention was placed on the directional orientation of temples and observatories so that they were constructed in accordance with Maya interpretation of the orbits of the stars. Immediately outside of this ritual center were the structures of lesser nobles, smaller temples, and individual shrines: the less sacred and less important structures had a greater degree of privacy. Outside of the constantly evolving urban core were the less permanent and more modest homes of the common people.

Classic Era Maya urban design could easily be described as the division of space by great monuments and causeways. In this case, the open public plazas were the gathering places for the people and the focus of the urban design, while interior space was entirely secondary. Only in the Late Post-Classic era did the great Maya cities develop into more fortress-like defensive structures that lacked, for the most part, the large and numerous plazas of the Classic.

All evidence seems to suggest that most stone buildings existed on top of a platform sub-structure that varied in height from less than a meter, in the case of terraces and smaller structures, to 45 meters in the case of great temples and pyramids. A flight of often steep stone steps split the large stepped platforms on at least one side, contributing to the common bi-symmetrical appearance of Maya architecture. Depending on the prevalent stylistic tendencies of an area, these platforms most often were built of a cut and stucco stone exterior filled with densely packed gravel. As is the case with many other Maya relief, those on the platforms often were related to the intended purpose of the residing structure. Thus, as the sub-structural platforms were completed, the grand residences and temples of the Maya were constructed on the solid foundations of the platforms. As all structures were built, little attention seems to have been given to their utilitarian functionality and much to their external aesthetics; however, a certain repeated aspect, the corbeled arch, was often utilized to mimic the appearance and feel of the simple Maya hut. Though not an effective tool to increase interior space, as it required thick stone walls to support the high ceiling, some temples utilized repeated arches, or a corbelled vault, to construct what the Maya referred to as pibnal, or sweatbath, such as those in the Temple of the Cross at Palenque. As structures were completed, typically extensive relief work was added, often to the covering of stucco used to smooth any imperfections; however, many lintel carvings have been discovered, as well as actual stone carvings used as a facade. Commonly, these would continue uninterrupted around an entire structure and contain a variety of artwork pertaining to the inhabitants or purpose of a building. Though not the case in all Maya locations, broad use of painted stucco has been discovered as well.

It has been suggested that, in conjunction to the Maya Long Count Calendar, every fifty-two years, or cycle, temples and pyramids were remodeled and rebuilt. It appears now that the rebuilding process was often instigated by a new ruler or for political matters, as opposed to matching the calendar cycle. However, the process of rebuilding on top of old structures is indeed a common one. Most notably, the North Acropolis at Tikal seems to be the sum total of 1,500 years of architectural modifications.

These were commonly limestone platforms of typically less than four meters in height where public ceremonies and religious rites were performed. Constructed in the fashion of a typical foundation platform, these were often accented by carved figures, altars and perhaps tzompantli, a stake used to display the heads of victims or defeated Mesoamerican ballgame opponents.

Large and often highly decorated, the palaces usually sat close to the center of a city and housed the population's elite. Every exceedingly large royal palace, or one consisting of many chambers on different levels might be referred to as an acropolis. However, often these were one-story and consisted of small chambers and typically at least one interior courtyard; these structures appear to take into account the needed functionality required of a residence, as well as the decoration required for their inhabitants stature. Archaeologists seem to agree that many palaces are home to various tombs. At Copán, beneath over four-hundred years of later remodeling, a tomb for one of the ancient rulers has been discovered and the North Acropolis at Tikal appears to have been the site of numerous burials during the Terminal Pre-classic and Early Classic periods.

"E-Group" is a classification given by Mayanists to certain structure complexes present at a number of Maya sites located in the central and southern Maya lowlands (e.g., the Petén region). Complexes of this type consist of a stepped pyramid main structure, situated on the western side of a quadrilateral plaza or platform. A raised but rather elongated structure appears along the eastern side of the plaza, running north-south; a variation has three smaller temple mounds on top of or replacing this platform, the middle of these substructures placed directly opposite the main structure. Often, two other subsidiary structures appear on the north and south sides of the plaza, respectively. The main western structure is typically terraced (i.e. has several levels), with inset stairways on each of its four sides, with only the eastern stairway, leading from the plaza, providing access to the summit. The stairways have large balustrades which protrude from the pyramid, which were decorated with large stucco masks and panels of architectural art. In other examples, believed to be of a later date, this quadripartite stairway configuration is lacking.

It has been theorized that these E-groups are observatories due to the precise positioning of the sun through the small temples when viewed from the pyramid during the solstices and equinoxes. Other ideas seem to stem from the possible creation story told by the relief and artwork that adorns these structures.

E-group complexes are named after their prototypical example, Structure E-VII-sub at the site of Uaxactun. They were first identified as a meaningful complex by archaeologist Frans Blom in 1924, who excavated the site under the auspices of the Carnegie Institute. 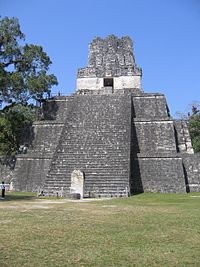 Often the most important religious temples sat atop the towering Maya pyramids, believed to be the closest place to the heavens. While recent discoveries point toward the extensive use of pyramids as tombs, the temples themselves seem to rarely, if ever, contain burials. Residing atop the pyramids, some of over two-hundred feet, such as that at El Mirador, the temples were impressive and decorated structures themselves. Commonly topped with a roof comb, or superficial grandiose wall, these temples might have served as a type of propaganda. As occasionally the only structure to exceed the height of the jungle, the roof combs atop the temples were often carved with representations of rulers that could be seen from vast distances. Beneath the proud temples sat the pyramids that were, ultimately, a series of platforms split by steep stairs that would allow access to the temple.

The Maya were keen astronomers and had mapped out the phases of celestial objects, especially the Moon and Venus. Many temples have doorways and other features aligning to celestial events. Round temples, often dedicated to Kukulcan, are perhaps those most often described as "observatories" by modern ruin tour-guides, but there is no evidence that they were so used exclusively, and temple pyramids of other shapes may well have been used for observation as well. 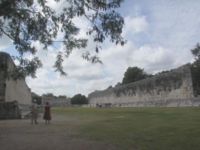 The largest of all ballcourts, the Great Ballcourt at Chichen Itza.
Main article: Mesoamerican ballcourt

As an integral aspect of the Mesoamerican lifestyle, the courts for their ritual ballgame were constructed throughout the Maya realm, often on a grand scale. The playing alleys of ballcourts were defined by two long walls. Courts built earlier in Maya history (as at Cobá) had sloped sides, while ones built later (as at Chichén Itzá) had vertical sides. Frequently, the ends were enclosed so as to create an

-shaped court when viewed from above.