Noble gas compounds are chemical compounds that include an element from Group 18 of the periodic table, the noble gases.

It was initially believed that the noble gases could not form compounds due to their full valence shell of electrons that rendered them very chemically stable and unreactive.

All noble gases have full s and p outer electron shells (except helium, which has no p sublevel), and so do not form chemical compounds easily. Because of their high ionization energy and almost zero electron affinity, they were not expected to be reactive.

In 1933 Linus Pauling predicted that the heavier noble gases would be able to form compounds with fluorine and oxygen. Specifically, he predicted the existence of krypton hexafluoride and xenon hexafluoride (XeF6), speculated that XeF8 might exist as an unstable compound, and suggested that xenic acid would form perxenate salts.[1][2] These predictions proved quite accurate, although subsequent predictions for XeF8 indicated that it would be not only thermodynamically unstable, but kinematically unstable.[3] As of 2009, XeF8 has not been made, although the octafluoroxenon(VI) anion (XeF82−) has been observed.

The heavier noble gases have more electron shells than the lighter ones. Hence, the outermost electrons experience a shielding effect from the inner electrons that makes them more easily ionized, since they are less strongly attracted to the positively-charged nucleus. This results in an ionization energy low enough to form stable compounds with the most electronegative elements, fluorine and oxygen, and even with less electronegative elements such as nitrogen and carbon under certain circumstances.[4][5]

Prior to 1962, the only isolated compounds of noble gases were clathrates (including clathrate hydrates). Other compounds such as coordination compounds were observed only by spectroscopic means.[2]

Clathrates (also known as cage compounds) are compounds of noble gases in which they are trapped within cavities of crystal lattices of certain organic and inorganic substances. The essential condition for their formation is that the guest (noble gas) atoms should be of appropriate size to fit in the cavities of the host crystal lattice. For instance, Ar, Kr, and Xe can form clathrates with β-quinol, but He and Ne cannot fit because they are too small.

Noble gas atoms such as Kr and Xe can appear as guests in crystals of melanophlogite.

Coordination compounds such as Ar·BF3 have been postulated to exist at low temperatures, but have never been confirmed. Also, compounds such as WHe2 and HgHe2 were reported to have been formed by electron bombardment, but recent research has shown that these are probably the result of He being adsorbed on the surface of the metal; therefore, these compounds cannot truly be considered chemical compounds.

Hydrates are formed by compressing the noble gases in water. It is believed that the water molecule, a strong dipole, induces a weak dipole in the noble gas atoms, resulting in dipole-dipole interaction. Heavier atoms are more influenced than smaller ones, hence Xe·6H2O is the most stable hydrate. The existence of these compounds has, however, been disputed in recent years.[citation needed]

Although there is some theoretical evidence for a few metastable helium compounds which may be stable at very low temperatures and extreme pressures, none are confirmed by experiments.

A neon compound is still yet to be theoretically identified.

Krypton is able to react with fluorine to form KrF2.

The first published report, in June 1962, of a noble gas compound was by Neil Bartlett, who noticed that the highly oxidising compound platinum hexafluoride ionised O2 to O2+. As the ionisation energy of O2 to O2+ (1165 kJ mol–1) is nearly equal to the ionisation energy of Xe to Xe+ (1170 kJ mol–1), he tried the reaction of Xe with PtF6. This yielded a crystalline product xenon hexafluoroplatinate, whose formula was proposed to be Xe+[PtF6]−.[2][7] It was later shown that the compound is actually more complex, containing both XeFPtF6 and XeFPt2F11.[8] This was the first real compound of any noble gas.

In recent years, several compounds of noble gases, particularly xenon, have been prepared. Among these are the xenon fluorides (XeF2, XeF4, XeF6), oxyfluorides (XeOF2, XeOF4, XeO2F2, XeO3F2, XeO2F4) and oxides (XeO3 and XeO4). Xenon difluoride can be produced by the simple exposure of Xe and F2 gases to sunlight; while the mixing of the two gases had been tried over 50 years before in an attempt to produce a reaction, nobody had thought to simply expose the mixture to sunlight.

Recently xenon has been shown to produce a wide variety of compounds of the type XeOnX2 where n is 1,2 or 3 and X is any electronegative group, such as CF3, C(SO2CF3)3, N(SO2F)2, N(SO2CF3)2, OTeF5, O(IO2F2), etc. The range of compounds is impressive, running into the thousands and involving bonds between xenon and oxygen, nitrogen, carbon, boron and even gold, as well as perxenic acid, several halides, and complex ions; a range of compounds similar to that seen with the neighbouring element iodine. The compound Xe2Sb2F11 contains a Xe–Xe bond, the longest element-element bond known (308.71 pm = 3.0871 Å).[11]

Short-lived excimers of Xe2 and noble gas halides such as XeCl2 are used in excimer lasers.

Radon reacts with fluorine to form RnF2, which glows with a yellow light in the solid state. 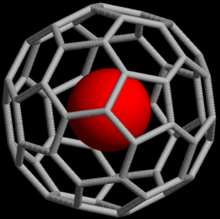 Noble gases can also form endohedral fullerene compounds where the noble gas atom is trapped inside a fullerene molecule. In 1993, it was discovered that when C60 is exposed to a pressure of around 3 bar of He or Ne, the complexes He@C60 and Ne@C60 are formed.[12] Under these conditions, only about one out of every 650,000 C60 cages was doped with a helium atom; with higher pressures (3000 bar), it is possible to achieve a yield of up to 0.1%. Endohedral complexes with argon, krypton and xenon have also been obtained, as well as numerous adducts of He@C60.[13]

Most applications of noble gas compounds are either as oxidising agents or as a means to store noble gases in a dense form. Xenic acid is a valuable oxidising agent because it has no potential for introducing impurities: the xenon is simply liberated as a gas. It is rivalled only by ozone in this respect.[2] The perxenates are even more powerful oxidising agents, and the xenon fluorides are good fluorinating agents. Stable salts of xenon containing very high proportions of fluorine by weight such as perfluoroammonium heptafluoroxenon, NF4XeF7 and the related (NF4)2XeF8 have been developed as highly energetic oxidisers for use as propellants in rocketry.[14][15]

Xenon-based compounds have also been used for synthesizing carbocations stable at room temperature in SO2ClF solution.[16]

Radioactive isotopes of krypton and xenon are difficult to store and dispose, and compounds of these elements may be more easily handled than the gaseous forms.[2]