The Ailanthus webworm, Atteva aurea, is an ermine moth now found commonly in the United States. It was formerly known under the scientific name Atteva punctella (see Taxonomy section). 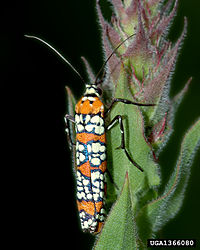 The Ailanthus webworm is thought to be native to South Florida and the American tropics (south to Costa Rica), habitat to its original larval host plants, the Paradise Tree (Simarouba glauca) and Simarouba amara. Another tree called Tree-of-Heaven (Ailanthus altissima), originally from China, has been widely introduced and Atteva aurea has jumped to this new host plant (giving it its common name, Ailanthus webworm). The moth does not survive cold winters, but migrates north each year so it is commonly seen in summer throughout the continental US, and occasionally eastern Canada (its northern limit in eastern Ontario and south-western Quebec beyond the host range).

Larvae produce nests on the host plant by pulling two to three leaflets around a network of loose webbing. Then they consume the leaflets. The caterpillars have a wide, light greenish-brown stripe down their backs and several thin, alternating white and olive-green stripes along their sides. The adult moth visits flowers, is diurnal, and is a pollinator.

Ailanthus, common-name Tree of Heaven, is considered an invasive species, although it is still sold by nurseries as yard plant, mainly because it is one of the species that will grow in polluted or otherwise difficult places. Atteva punctella can be a minor pest in nurseries, although it rarely does serious damage.

Wilson JJ et al. discovered that morphologically similar yponomeutid moths were assigned two different names, Atteva ergatica in Costa Rica and Atteva punctella in North America, but had identical DNA barcodes. Combining DNA barcoding, morphology and food plant records also revealed a complex of two sympatric species that are diagnosable by their DNA barcodes and their facies in Costa Rica. However, neither of the names could be correctly applied to either species, as A. ergatica is a junior synonym and A. punctella a junior homonym. By linking the specimens to type material through morphology and DNA barcoding, they determined that the species distributed from Costa Rica to southern Quebec and Ontario, should be called A. aurea, whereas the similar and marginally sympatric species found in Central America should be called A. pustulella.

The name Phalaena (Tinea) punctella was recognized as a junior homonym almost immediately after its description but has been retained through several major works (Heppner and Duckworth 1983; Covell 1984; Heppner 1984). The two objective replacement names proposed were Tinea punctella (Fabricius, 1787) and Crameria subtilis (Hübner, 1822). The oldest valid name to replace Phalaena punctella is Tinea pustulella but this remained overlooked until recently (Heppner 2003). Over time seven more nominal taxa were synonymized under Atteva pustulella, being Deiopeia aurea (Fitch, 1857), Poeciloptera compta Clemens, 1861, Oeta compta floridana (Neumoegen, 1891), A. edithella (Busck, 1908), A. exquisita (Busck, 1912), A. ergatica (Walsingham, 1914) and A. microsticta (Walsingham, 1914).

There were early suspicions that A. aurea and A. pustulella might represent different species, the former distributed in the United States, the latter in South America, but at the time there was insufficient material to support this view (Walsingham 1897). A recent taxonomic review of New World Atteva (Becker 2009) introduced several nomenclatural changes and recognized three separate species within the long-standing concept of A. pustulella: A. pustulella, A. aurea and A. floridana. The most recent treatment retains A. floridana as a synonym of Atteva aurea (Wilson JJ, 2010).