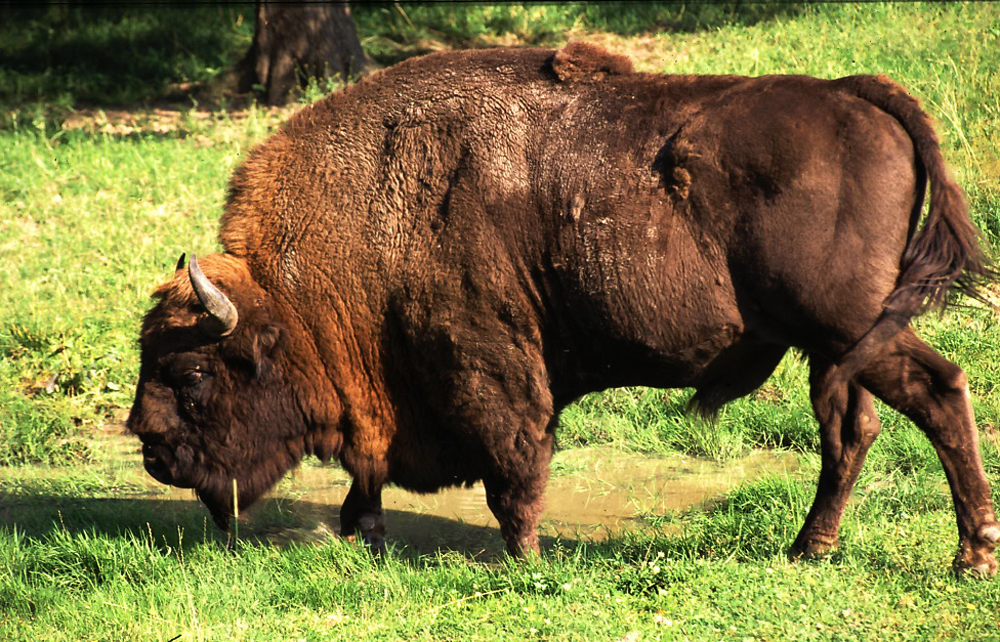 image_width = 250px
regnum = ia
phylum = Chordata
classis = ia
ordo =
familia =
genus = """'
species = "B. bonasus"
binomial = "Bison bonasus"
binomial_authority = (Linnaeus, 1758)The wisent (pronEng|ˈviːzənt), or European bison ("Bison bonasus"), is a and the heaviest surviving land animal in . A typical wisent is about 2.9–3.0 m (9.5 ft) long and 1.8–2.2 m (5.9–7.4 ft) tall, and weighs 300–920 kg (660–2000 lb). It is typically smaller than the related ("Bison bison"), and has shorter hair on the neck, head, and forequarters, but longer tail and horns. Wisent are now forest-dwelling. They have few predators (besides humans) with only scattered reports from the 1800s of and predation. Wisent were first scientifically described by in 1758. Some later descriptions treat the wisent as with the . It is not to be confused with the , the extinct ancestor of domestic cattle.

In 1996 the classified the wisent as an . In the past it was commonly killed to produce and s, especially during the .

About 2000 years ago, wisent lived throughout most of Europe - from Britain in the west, to in the east, and from in the south, to in the north. Wisent lived not only in s but also roamed s.

In , wisent became by the 11th century, except in the , where they lasted into the 14th century. The last wisent in died in 1790. In the east, wisent were legally the property of the Polish kings, Lithuanian grand dukes and Russian czars. King instituted the for a wisent in the mid-16th century. Despite these measures, and others, the wisent population continued to decline over the following four centuries. The last wild wisent in Poland was killed in 1919 and the last wild wisent in the world was killed by poachers in 1927 in the . By that year fewer than 50 remained, all in s.

In order to help manage this captive population, Dr. Heinzel Heck commenced the first for a non-domestic species; first as a card index from 1923 with a full publication in 1932. [cite book|last=Tudge|first=Colin|year=1992|title=Last Animals at the Zoo|publisher=Island Press|location=Washington, D.C.|isbn=1-5596-3158-9]

Wisent were reintroduced successfully into the wild, beginning in 1951. They are found living free-ranging in forest preserves like and in and in and .

Free-ranging herds are found in , , , , , , , , and since 2006 in Fact|date=June 2008. There are plans to re-introduce two herds in northern Germany Clarifyme|date=March 2008. Zoos in 30 countries also have quite a few animals. There were 3,000 individuals (as of 2000), all descended from only 12 individuals. Because of their limited genetic pool, they are considered highly vulnerable to diseases like .

Wisent have lived as long as 28 years in captivity although in the wild their lifespan is shorter. Productive breeding years are between four and 20 years old in females and only between six and 12 years old in males. Wisent occupy home ranges of as much as 100 square kilometers and some herds are found to prefer meadows and open areas in forests.

Wisent can cross-breed with . The products of a German interbreeding program were destroyed after . This program was related to the impulse which created the . The cross-bred individuals created at other zoos were eliminated from breed books by the 1950s. A Russian program resulted in a wild herd of hybrid animals which presently lives in the (550 individuals in 1999).

There are also wisent-cattle hybrids. Cattle and wisent can hybridise fairly readily, but the calves cannot be born naturally (birth is not triggered correctly by the first-cross hybrid calf, and they must therefore be born by ). In 1847 a herd of wisent-cattle hybrids named was created by . The animal was intended to become a durable and cheap alternative to cattle. The experiment was continued by researchers from the until the late 1980s. Although the program resulted in a quite successful animal that was both hardy and could be bred in marginal grazing lands, it was eventually discontinued. Currently the only surviving żubroń herd consists of just a few animals in , Poland.

Three sub-species have been identified:

The modern herds are managed as two separate lines - one consisting of only "Bison bonasus bonasus" (all descended from only seven animals) and one consisting of all 12 ancestors including the one "Bison bonasus caucasicus" bull. Only a limited amount of from the has been found, having a small effect on skeletal growth in cows and a small rise in calf mortality. Genetic variability continues to shrink. From five initial bulls, all current wisent bulls have one of only two remaining s.