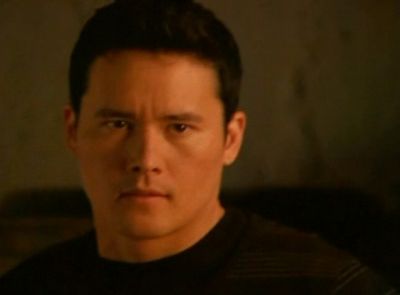 Adam Park is a fictional major character from the universe of the American franchise "", played by . He is a main character in the "" , as well as three of its successive incarnations "", ', and '. He also appeared in the "" episode "Always a Chance", as well as the "" two-parter "". Adam is half-Asian and half-Caucasian.

Adam is shy, sensitive, and spiritual. His training of has made him a disciplined and efficient fighter specializing in .

Adam first met the Ranger teens during an attempt to save his teacher's baby alongside his friends and . The three of them lived in the fictional city of Stone Canyon, California and were visiting Angel Grove for the Final Round of the Team Ninja competition. To the Ranger teens surprise, the Stone Canyon trio was not there as spectators, but to compete in the final round of the tournament (they won). Adam (along with Aisha and Rocky) eventually moved to Angel Grove permanently and enrolled in Angel Grove High School.

Adam's new friendship with , and would lead to his, Aisha's and Rocky's constant entanglement in 's schemes. In one encounter, the three Stone Canyon teens are kidnapped by and chained together inside a cave. A snake whose bite will render them evil permanently is set loose on them by Goldar. Their attempt to escape almost succeeds, but ultimately fails; it is the Power Rangers Kimberly, Billy and Tommy who rescue them. Billy manages to wrestle the snake away so that the teens can be freed, however, despite Kim's destruction of the snake, the injuries it caused to Billy's neck while Morphed force Billy to remove his helmet to prevent suffocation. Though able to breathe again, Billy's identity as a Power Ranger, along with Kim and Tommy's, are revealed to Adam and his friends. The three teens would be taken to the Command Center where the identities of the other Rangers , and would be revealed to them and they would take an oath not to reveal the identities of the rangers.

Adam was selected to take Zack's place as the Black Power Ranger when he, along with Jason and Trini, left to attend a World Peace Conference as an ambassador in Switzerland. Adam was given the powers of both the Power Coin and the Lion Thunderzord. During this time, he was targeted by , who disguised herself as a girl named Sabrina in order to manipulate the shy teen into alienating his friends before facing an ambush alone, perpetrated by the Scorpion Warrior. Even though Aisha didn't trust Sabrina, she attempted to get along with her for Adam's sake. This led to her being able to interfere when Scorpina lured Adam on a hike to a remote part of the park. Though the encounter left Adam's confidence in himself weakened, he would soon recover when he gained the attention of a girl Aisha had been trying to hook him up with. (Episode 89 - "Goldar's Vice-Versa")Later, Adam's confidence is tested again. A student in one of his martial arts classes is picked on and Adam is reminded of his childhood when he notes the similarity between his student and himself when he was younger. After some private practice with the student, Goldar chooses the time to use the Mirror of Regret to force Adam to watch the memories of when others picked on him. Adam's resolve wavers, but he remembers that he isn't as weak anymore and forces Goldar to retreat.

At the beginning of the third season of "", Adam gained new powers of the Frog, becoming the Black Ninja Ranger. He also gained the ability to pilot the Frog Ninjazord and later the Black Shogunzord. He was also later granted the power of the Metallic Armor. When Master Vile ('s father) came to Earth to retrieve the Zeo Crystal, the Rangers managed to retrieve it first. To ensure that Master Vile couldn't get it again, the Rangers split the Zeo Crystal into five sub-crystals and sent them to different points in history.

Adam appears in this movie. Due to the movie being set in an alternate universe from the series, it is unknown is Adam owned either the Mastadon Dinozord or the Lion Thunderzord, though he still had the Mastadon Power Coin. It is also unknown if Zack was the Black Ranger before him in the movie's timeline. When Lord Zedd releases the terrible Ivan Ooze from his chamber, Ivan destroys the command center and Adam's powers. After traveling to the distant planet of Phaedos, Adam gains the power of the Ninjetti, and the animal spirit of the Frog, along with the Frog Ninjazord.

Vile then turned back time using the Orb of Doom, turning the Rangers back into children. The Rangers soon recruited the to fight in their stead. Billy had then created a device which would restore their them to their old selves. He used the Ninja Coins as a power source, testing it on himself. This worked, but it allowed Goldar to capture the coins and Zedd and Rita destroyed them.

Adam had to recover the Green Zeo Sub-Crystal. He was transported to the past Korea, near where his grandmother was born. He met Kai-Ogi, a local sage, and found the sub crystal behind a waterfall.

When Adam's fragment of the Zeo Crystal was reunited with the four other fragments, he reverted to his normal age, and soon became the Green Zeo Ranger in "". He gained the Zeozord IV (which resembled Taurus the bull). Since Billy was no longer able to fight alongside the rangers Adam took the position as second-in-command behind Tommy. After the had revealed his identity as the Gold Zeo Ranger, he gave the Rangers the Super Zeo Gems and Super Zeo zords. Adam received the Green Super Zeo Crystal and Super Zeozord IV. Through the season, Adam grew long hair. When Jason returned as the Gold Zeo Ranger, Adam's second-in-command position would be passed on to him, due to the veteran Ranger's experience. This lasted until the end of "Zeo" when Jason had to return his powers back to Trey due to the powers not being built for human physiology. Afterward, Adam was once again second-in-command.

When the evil Space Pirate Divatox threatens to raise a powerful monster named Maligore to marry her, Adam, along with the other rangers, accept new Turbo powers and becomes the Green Turbo Ranger, and gains the Desert Thunder Turbozord.

In this series we see that, after graduating from Angel Grove High School, he has become an acclaimed stuntman, and his character received even more focus than before. He shortly served as the Green Turbo Ranger (along with the rest of the last remnants of the first cast of Power Rangers as their respective colors) until the episode "Passing the Torch" in which he chose to take his place as the Green Turbo Ranger, and he left the show.

Adam would return for an episode in the following series "" (specifically the episode "Always a Chance"). Adam helped Carlos, the Black Space Ranger, reclaim his confidence as he helped him train harder. He was shown to still have his original from when he was the Black Power Ranger. However it and the Mastodon in it were damaged. [http://www.rovang.org/wg/pics/powermorpher-pris.jpg] .

He used the cracked morpher to become the Black Power Ranger once again and help Carlos in his battle against LizWizard. However, due to the lack of a connection to the , the Black Ranger powers quickly faded away and left Adam incredibly weak (very nearly killing him). But he survived and decided not to risk morphing again.

He appears alongside , , , and in "", a special team-up episode commemorating the fifteenth anniversary of the Power Ranger franchise. With the powers disabled by the villain , the summons five former Rangers so they can defend the Corona Aurora jewels (restoring ranger powers to those who previously lost or damaged them), with Adam as their leader. He and Kira reference to Tommy about him having the title of doctor.

In the first part, Adam mentions that he knows someone who can restore the Overdrive team's powers after their link to the Morphing Grid is severed by Thrax. This 'someone' turns out to be the newly reconnected . Currently, Adam owns a Martial Arts dojo in Angel Grove and retains Alpha by his side at the dojo. It is implied that his restored powers, as well as those of the other former Rangers chosen by the Sentinel Knight, still remain intact.

Adam twice uses Operation Overdrive weaponry in battle. In a fight against Flurious, Adam arrives on the HoverTek Cycle. In the final battle, Adam takes on Thrax solo and uses the Defender Vest for protection (which is overpowered by the villain). He also uses the Flash Point Megazord against Vulturus. He also prefers to use his Power Axe, though this might be due to the absence of a Blade Blaster on his person (though a holster still remains on his belt).