Provincetown is a New England town located at the extreme tip of Cape Cod in Barnstable County, Massachusetts, United States. The population was 3,431 at the 2000 census, with an estimated 2007 population of 3,174.[2] Sometimes called "P-town",[3][4] the town is known for its beaches, harbor, artists, tourist industry, and its status as a vacation destination of gays and lesbians.

The area was originally settled by the Nauset tribe, who had a settlement known as Meeshawn.

Bartholomew Gosnold named Cape Cod in Provincetown Harbor in 1602.[5] In 1620, the Pilgrims signed the Mayflower Compact when they arrived at the harbor. They agreed to settle and build a self-governing community, and then came ashore in the West End.[6] Though the Pilgrims chose to settle across the bay in Plymouth, Provincetown enjoyed an early reputation for its fishing grounds. The "Province Lands" were first formally recognized by the union of Plymouth colony and Massachusetts Bay colony in 1692, and its first municipal government was established in 1714.[7] After harboring ships for more than a century Provincetown was incorporated by English settlers in 1727. The population of Provincetown remained small through most of the 18th century.

Commercial Street in an 1890s postcard 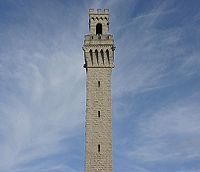 Following the American Revolution, however, Provincetown grew rapidly as a fishing and whaling center.[7] The population was bolstered by a number of Portuguese sailors, many of whom were from the Azores,[8] and came to live in Provincetown after being hired to work on US ships. By the 1890s, Provincetown was booming, and began to develop a resident population of writers and artists, as well as a summer tourist industry. After the 1898 Portland Gale severely damaged the town's fishing industry, members of the town's art community took over many of the abandoned buildings. By the early decades of the 20th century, the town had acquired an international reputation for its artistic and literary output. The Provincetown Players was an important experimental theater company formed during this period. It was an example of intellectual and artistic connections to Greenwich Village in New York that began then.

The town includes eight buildings and a historic district on the National Register of Historic Places.

In the mid-1960s, Provincetown saw population growth. The town's rural character appealed to the hippies of the era; furthermore, property was relatively cheap and rents were correspondingly low, especially during the winter. Many of those who came stayed and raised families. Commercial Street gained numerous cafes, leather shops, head shops — various hip small businesses blossomed and many flourished.

By the mid-1970s a substantial number of members of the gay community began moving to Provincetown. However, homosexuality had been prevalent in Provincetown as early as the turn of the century with the introduction of the artists' colony. Drag queens could be seen performing as early as the 1940s in Provincetown. In 1978 the Provincetown Business Guild (PBG) was formed to promote gay tourism. Today more than 200 businesses belong to the PBG and Provincetown is perhaps the best-known gay summer resort on the East Coast. The 2010 US Census revealed Provincetown to have the highest rate of same-sex couples in the country, at 163.1 per 1000 couples.[9]

Since the 1990s, property prices have risen significantly, with numerous condo conversions, causing some residents economic hardship. The recent housing bust (starting in 2005) has so far caused property values in and around town to fall by 10 percent or more in less than a year.[10] This has not slowed down the town's economy, however. Provincetown's tourist season has expanded to the point where the town has created festivals and weeklong events throughout the year. The most established are in the summer: the Portuguese Festival and PBG's Carnival Week.

Nearly two-thirds of the town's land area is covered by the Cape Cod National Seashore. To the north lie the "Province Lands", the area of dunes and small ponds extending from Mount Ararat in the east to Race Point in the west, along the Massachusetts Bay shore. The Cape Cod Bay shoreline extends from Race Point to the far west to the Wood End in the south, eastward to Long Point, which points inward towards the Cape, and providing a natural barrier for Provincetown Harbor. All three points are marked by lighthouses. The town's population center extends along the harbor, south of the Seashore's lands. 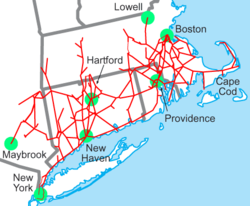 Map of railroad lines owned by New York, New Haven and Hartford Railroad, with the branch extending into Provincetown.

Provincetown is the eastern terminus of U.S. Route 6, both in the state and in the nation. Although the terminus is directed east officially, geographically speaking, the road, having curved around Cape Cod, is facing west-southwest at the point, and is marked only by its junction with Route 6A. The state-controlled portion ends with a "STATE HIGHWAY ENDS" sign as the road enters the Cape Cod National Seashore, after which the road is under federal maintenance. Route 6A passes through the town as well, mostly following Bradford Street (whereas US 6 originally followed Commercial Street before the bypass was built and Commercial Street was switched to one-way westbound), and ending just south of the Herring Cove Beach.

Provincetown is served by seasonal ferries to Boston and to Plymouth that charge their passengers up to $51 for a one-way trip, up to $83 for a round-trip ticket.[11][12] Both dock at MacMillan Pier, located just east of the Town Hall. The town has no rail service (the town's only railway having been abandoned by the New York, New Haven and Hartford Railroad in the early 1960s and a large portion of the "road" later converted into roads Harry Kemp Way and Rear Howiand, plus a pedestrian path), but is the home of Provincetown Municipal Airport, located just east of Race Point.

The airport is mostly for General Aviation, but does receive regular scheduled service from Cape Air which also operates code-share flights for JetBlue. It is a well-equipped, if small, general-aviation airport with a single 3,500-foot (1,100 m) runway, an ILS approach, and full lighting. The nearest national and international service is from Logan International Airport in Boston. 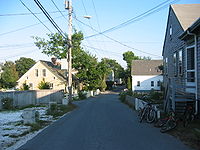 A residential street in Provincetown

There were 1,837 households out of which 9.0% had children under the age of 18 living with them, 17.7% were married couples living together, 5.3% had a female householder with no husband present, and 74.7% were non-families. 53.2% of all households were made up of individuals and 14.5% had someone living alone who was 65 years of age or older. The average household size was 1.69 and the average family size was 2.65.

Provincetown's zip code has the highest concentration of same-sex couple households of any zip code in the United States.[24]

Demographics in a resort town

Traditional sources such as the United States Census, municipal voting rolls and property records may not accurately portray the demography of resort towns. While Provincetown's year-round population is small and has been declining, the summer population has been estimated at 60,000.

And economic statistics based on federal census figures may be deceptive. For example, the census counts 3,890 housing units in Provincetown, but only 1,837 "households." And there is an apparent disparity between the census figures for median household income ($32,716) and median home value ($323,600).

Part-time residents are not counted in the census. These people may own a second home in the town or pay rent for up to six months each year. Many of them pay property and other taxes, hold jobs in the community and even own businesses. 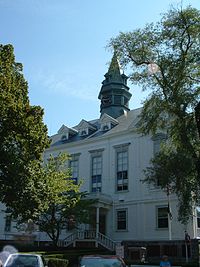 Provincetown is represented in the Massachusetts House of Representatives as a part of the Fourth Barnstable district, which includes (with the exception of Brewster) all the towns east and north of Harwich on the Cape. The seat is held by Democrat Sarah Peake, a former Provincetown selectman. The town is represented in the Massachusetts Senate as a part of the Cape and Islands District, which includes all of Cape Cod, Martha's Vineyard and Nantucket except the towns of Bourne, Falmouth, Sandwich and a portion of Barnstable.[25] The Senate seat is held by Democrat Dan Wolf, President of Cape Air. Provincetown is patrolled by its own Police Department[26] as well as the Second (Yarmouth) Barracks of Troop D of the Massachusetts State Police.[27]

On the national level, Provincetown is a part of Massachusetts's 10th congressional district, and is currently represented by Bill Keating. Following the death of Ted Kennedy, the state's senior (Class I) member of the United States Senate is John Kerry (re-elected in 2008); the junior (Class II) senate seat is held by Scott Brown, the victor in the special Senate election on January 19, 2010.

Provincetown is governed by the open town meeting form of government, and is led by a town manager and a board of selectmen. The town has its own police and fire departments, both of which are stationed on Shankpainter Road. The town's post office is located along Commercial Street, near the town's Fourth Wharf. The town's Provincetown Public Library is a member of the Cape Libraries Automated Materials Sharing library network and is also located along Commercial Street, in the former Center Methodist Episcopal Church building since 2005.

In 2009, the school board elected to shutdown Provincetown High School at the end of the 2012–2013 school year, and elected to merge with nearby Nauset Regional High School in North Eastham. This merge will become effective in the 2013–2014 academic year.

In June 2010, the Provincetown school board decided to make condoms available to students if they requested them from a school nurse or school counselor. Because the board did not specify a lower age limit, this resulted in extensive media coverage with exaggerated claims that the school was "passing out condoms" to children as young as five.[28][29] School Superintendent Beth Singer clarified the decision, stating that "If an early elementary school pupil asks for a condom, the nurse would ask the pupil a series of questions and almost certainly deny them."[30]

In 2003, Provincetown received a $1.95 million low interest loan from the Rural Development program of the U.S. Department of Agriculture to help rebuild the town's MacMillan Pier. It primarily serves tourists and high-speed ferries that charge their passengers up to $45 per one-way trip. Between 2004 and 2007, the Provincetown Art Association and Museum[31] received four Rural Development grants and loans totalling $3 million to increase the museum's space, add climate-controlled facilities, renovate a historic sea captain's house (the Hargood House) and cover cost overruns.[32] As the mission of the Rural Development program is "To increase economic opportunity and improve the quality of life for all rural Americans",[33] the USDA considered Provincetown's residents in the 2000s to still be rural and to still require such federal assistance.

The Atlantic House in Provincetown is a contender for the oldest gay bar in the US and Frommer's calls it "the nation's premier gay bar".[34][35][36]

Other notable festivals during the year include the Christmas-themed "Holly Folly", "Bear Week", "Mate's Leather Weekend", "Women's Week", "Family Week", "Single Men's Weekend", "Provincetown International Film Festival", "Provincetown Rocks: The Festival!" and the "Provincetown Jazz Festival". In October, Provincetown sees the arrival of transvestite, transgender and transsexual people for the annual Fantasia Fair. Started in 1975, it is the longest running event of its kind in the USA.

Provincetown is mentioned, along with various other Cape Cod locations, in the Vampire Weekend song 'Walcott', included on their 2008 debut album Vampire Weekend.

In November, 2011, the Provincetown Theater Company became the first theater company in New England to stage a live-action dramatic theatrical presentation of horror-fantasy author H.P. Lovecraft. The story was Lovecraft's 1919 classic, "The Picture in the House," and was described as "...the macabre come to life." The adaptation was produced for the 22nd Fall Playwright's Festival.[37]