Colleges within universities in the United Kingdom

Colleges within universities in the United Kingdom 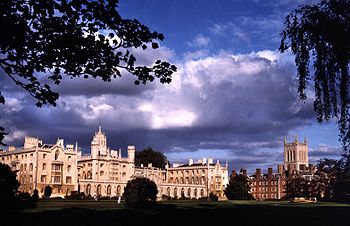 The two ancient universities of England: Oxford and Cambridge (collectively termed Oxbridge), originally were rather federations of autonomous colleges, with a small central university body, then universities in the common sense. While many of the Student Affairs functions are housed in the colleges, each college is more than a residence hall.

In addition to accommodation, meals, common rooms, libraries, sporting and social facilities for its students, each college admits undergraduate students to the University and, through tutorials or supervisions, contributes to the work of educating them, together with the university's departments/faculties. Graduate students do not receive education from their college. Graduate students at Cambridge and Oxford have to name two college choices on their application, which goes to the department/faculty, and if the university accepts them, it guarantees that the applicant will have a college memberships, although not necessarily at the favoured college(s).

The faculties at each university provide lectures, central facilities such as libraries and laboratories, and examines for and awards degrees. Academic staff are commonly employed both by the university (typically as lecturer or professor) and by a college (as fellow or tutor), though some may have only a college or university post, but the first is rather uncommon. Nearly all colleges cater to students studying a range of subjects.

Since the colleges are all fully independent legal entities within the university, owning their own buildings, employing their own staff, and managing their own endowments, colleges vary widely in wealth. It is entirely possible for some colleges to be in better financial health than the universities of which they are a part. Currently about 2/3 of the £3.9 billion endowment of Cambridge University is in the hands of its colleges, and therefore just 1/3 belongs to the central university.

Typically a student, and some of the fellows of an Oxbridge college is said to be "living in college" if their accommodation is inside the college buildings. Most colleges also accommodate students, especially graduate students in houses or other buildings away from the college site.

Main article: Colleges of the University of Durham

Durham University is also collegiate in nature, and its colleges enjoy the same legal status as 'listed bodies' as the colleges of Oxford and Cambridge. Generally, however, its colleges are not financially independent (exceptions being Ushaw, St Chad's and St John's). Although the colleges do not have any teaching duties as part of the university, they do provide meals, libraries, computers, scholarships and recreational facilities for their members. The colleges also provide a larger role in the pastoral care of students, with each college having a personal tutorial system, JCR, MCR & SCR and either a Master or Principal in charge of the everyday running of the college. The colleges have a role in the admissions of students, although not as large as those at Oxbridge, and normally confined to identifying students that suit the college ethos and atmosphere. Each college has its own individual character and nature. There are 16 colleges in Durham; the Bailey colleges are located on the historic peninsula around North and South Bailey street and are usually thought of as being the more traditional - all require the wearing of gowns at either matriculation, JCR meetings or Formal meals, except the 'traditionally informal' St Cuthbert's Society. There are 7 other newer colleges known as the Hill Colleges, the College of St Hild and St Bede which falls into neither group, and the two colleges of the Stockton campus. 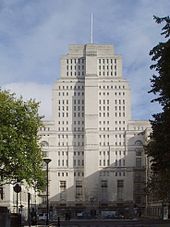 Senate House, the administrative centre of the University of London

These colleges, whether they are recognised or listed bodies, award the University of London degrees. The Privy Council, however, had recently granted degree awarding power to Imperial College London (2003) and University College London (2005), while the former had formally decided to leave the federal University to award its own degree and the latter decided not to exercise the power for the time being.

University of the Arts London

The University of the Arts London comprises six specialist art and design colleges, dating since the mid 1880s, that were brought together for administrative purposes.

Three of the "Plate glass universities", Lancaster, York and Kent, have a similar system, although their colleges operate on a different legal footing to those at Durham and Oxbridge.