The Cuvilliés Theatre (German: Cuvilliés-Theater) or Old Residence Theatre (Altes Residenztheater) is the former court theatre of the Residenz in Munich, southern Germany. 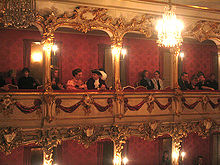 Elector of Bavaria Maximilian III Joseph ordered the construction of a new theatre outside the palace after a fire in the St.George's Hall of the Residence which had served previously as a theatre room. It was built from 1751 to 1753 by François de Cuvilliés in rococo style. The carving was done under supervision of Johann Baptist Straub.

The interior decoration was removed under King Ludwig I when the building became a depot for the National Theatre Munich, but the Residence Theatre was already restored and re-opened in 1857 under King Maximilian II.

The theatre was again renovated and technically modernised from 2004-2008, and on 14 June 2008, the theatre re-opened with the premiere performance of a new production of Mozart's Idomeneo, staged by Dieter Dorn, conducted by Kent Nagano. 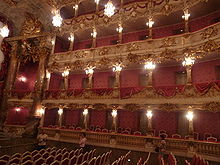 Many operas were staged here by the Bavarian State Opera, including the premieres of Mozart's Idomeneo in 1781 and Carl Maria von Weber's Abu Hassan in 1811. The Cuvilliés Theatre has been also a stage for plays. In 1831 Ferdinand Raimund gave a guest performance. Ernst von Possart staged several Mozart operas in original version during the 1890s.

The court theatre was opened for the public already in 1795 under Charles Theodore, Elector of Bavaria.