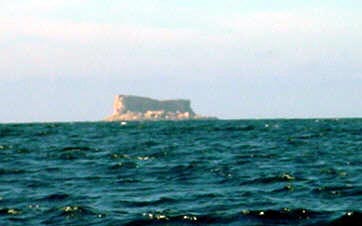 imagesize =
image_caption = Filfla in the horizon.

The name is believed to come from "filfel", the Arabic for a peppercorn.

It has an area of just convert|6|ha|acre|lk=on and is a crumbling flat-topped plateau surrounded by 60 metre high cliffs. The only known permanent structure on it was a built inside a cave in 1343, which was destroyed by an in 1856 that also sank part of the island. Until 1971 the and used the island for target practice. It became a bird reserve in 1980. The "Filfla Natural Reserve Act", enacted in 1988, provided for further restrictions on access and use, including a prohibition on fishing within a (1.9 km) around due to the possibility of unexploded . Three species of sea birds breed on the islet: the (c.5,000 pairs), (c.200 pairs) and (c.130pairs). A type of ("Podarcis filfolensis" ssp. "filfolensis") and door snail ("Lampedusa imitatrix gattoi") are endemic to Filfla. A large wild leek, growing up to 2 m high, also occurs.There is a small rocky islet next to Filfla, called Filfoletta.

Access to Filfla is only possible for educational or scientific purposes and visitors must get prior permission from the Ministry responsible for the environment.

On the Maltese coast opposite Filfla are the archeological sites of and , the (one of 13 that built around the coast of Malta), and a memorial to , one of Malta's British governors-general.

It is referred to in lyrics and cover art as the location of a fictitious radio station in the album, "Radju Filfla".