The Daytona 500 is a 500 miles (804.7 km)-long NASCAR Sprint Cup Series race held annually at the Daytona International Speedway in Daytona Beach, Florida. It is one of four restrictor plate races on the Cup schedule.

The Daytona 500 is regarded as the most important and prestigious race on the NASCAR calendar, carrying by far the largest purse.[1] Championship points awarded are equal to that of any other Sprint Cup race. It is also the series' first race of the year; this phenomenon is virtually unique in sports, which tend to have championships or other major events at the end of the season rather than the start. Since 1995, U.S. television ratings for the Daytona 500 have been the highest for any auto race of the year, surpassing the traditional leader, the Indianapolis 500 which in turn greatly surpasses the Daytona 500 in in-track attendance and international viewing. The 2006 Daytona 500 attracted the sixth largest average live global TV audience of any sporting event that year with 20 million viewers.[2]

The event serves as the final event of Speedweeks and is sometimes referred to as "The Great American Race" or the "Super Bowl of Stock Car Racing." It is held the second or third Sunday in February, and since 1971, has been loosely associated with both Valentine's Day and the Presidents Day weekend. On February 20, 2011 it was announced that the 54th running of the race will be moved one week later to February 26, 2012.

The winner of the Daytona 500 is presented with the Harley J. Earl Trophy in Victory Lane, and the winning car is displayed, in race-winning condition, for one year at Daytona 500 Experience, a museum and gallery adjacent to Daytona International Speedway.

The race is the direct successor of shorter races held on Daytona Beach. This long square was partially on the sand and also on the highway near the beach. Earlier events featured 200-mile (320 km) races with stock cars. Eventually, a 500-mile (805 km) stock car race was held at Daytona International Speedway in 1959. It was the second 500-miler, following the Southern 500, and has been held every year since. By 1961, it began to be referred to as the "Daytona 500",[3] by which it is still commonly known.

The qualifying procedure is unique for the Daytona 500. Some teams must race their way into the Daytona 500 field. The first row is set by a timed round of qualifying, held one week before the race. (Prior to 2003, this was two rounds; prior to 2001, it was three.) The remainder of the field is set by two separate qualifying races (these were 100 miles (160 km) from 1959–1967; 125 miles (201 km) from 1969–2004; and 150 miles (240 km), with two-lap overtime if necessary, beginning in 2005 (These races were not held in 1968 because of rain). The top two drivers from the qualifying races that are not in the top 35 in owner points are given spots on the field, and the rest is set by the finishing order of the duels, with guaranteed spots to those in the top 35. The remaining spots, 40 to 43 are filled by top qualifying times of those not already in the field from the qualifying race. If there is a previous NASCAR Champion without a spot, he will get one of those four spots, otherwise, the fourth fastest car is added to the field.

Prior to 2005, after the top two cars were set, the top 14 cars in the qualifying races advanced to the field, and then between six (1998–2003), eight (1995–97, 2004), or ten (until 1994) fastest cars which did not advance from the qualifying race were added, and, since 1976, between one and seven cars were added by previous year's points performance and or championship, except for 1985, when no such car was eligible for a provisional starting spot, the only time that happened in the Daytona 500 from when the provisional was added in 1976 through 2004.

The Daytona 500 was the first 500-mile (800 km) auto race to be televised live flag-to-flag on network television when CBS aired it in 1979, continuing to air until 2000. From 2001 to 2006, the race alternated between FOX and NBC under the terms of a six-year, $2.48 billion NASCAR television contract. Starting in 2007, FOX became the exclusive home of the Daytona 500 under the terms of NASCAR's new television package.

A byproduct of both the track's 1998 lighting system and both the 2001 and 2007 television packages has been later start times. The race started at 12:15 pm (EST) from 1979 until 2000. The start time was moved to 2:30 pm (EST) for the convenience of west coast viewers. The 2005 race ended at sunset for the first time in its history, and the 2006 race ended well after sunset. The changing track conditions caused by the onset of darkness in the closing laps force the crew chiefs to predict the critical car setup adjustments needed for their final two pit stops. Since then, all races have ended after dark, with the 2007 race ending in prime time, at 7:07 pm (EST). However, in 2010, the race moved back to a 1:00 pm start time, which should have resulted in it ending in daylight; however, two red flags caused by track surface issues led to long delays that pushed the race to 7:34 PM EST, pushing the race into prime-time for the second time.

The television ratings for the Daytona 500 have surpassed those of the larger Indianapolis 500 (which has much larger physical attendance and international attendance) since 1995, even though the 1995 race was available in much fewer homes than the year before. Then-broadcaster CBS had lost well-established VHF (channels 2–13) affiliates in major markets as a result of the Fox affiliate switches of 1994. As an example, new affiliates WDJT in Milwaukee and WGNX in Atlanta — both cities that are home to NASCAR races — and WWJ in Detroit, close to Michigan International Speedway, were on the UHF band (channels 14–69), meaning that they had a significantly reduced broadcast area compared to former affiliates WITI, WAGA-TV, and WJBK, respectively. WDJT was not available in many Wisconsin markets by the time the Daytona 500 took place.

For NASCAR Grand National winners at Daytona from 1949–1958, see Daytona Beach & Road Course.
Mario Andretti, born in Italy, is the only driver to win the race not from the United States.

† – Andretti was born in a part of Italy that is now in Croatia, but became a naturalized American citizen.
‡ – Record for fastest Daytona 500 at 177.602 mph (285.823 km/h) set by Buddy Baker in 1980.
1 – Originally started 39th, but had to go back to the 43rd position due to changing to a backup car after crashing in the qualifying races. A driver who crashes during the qualifying race and goes to a backup car, or after 2003, changes an engine between the first practice after the qualifying race and the Daytona 500, is relegated to the rear of the field.

The following races have been shortened:

The following races have been lengthened because of the green-white-checker finish. Note that from July 25, 2004 until November 22, 2009, only one attempt was permitted in Sprint Cup Series racing. Starting February 11, 2010, a maximum of three attempts was permitted. 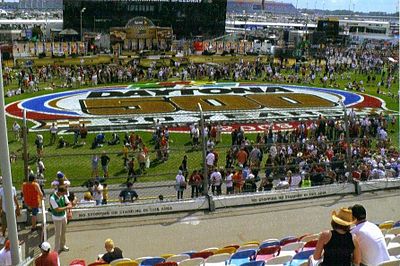 Prerace ceremonies before the 2008 Daytona 500.

Winners from the pole position

Winners as both driver and owner

Drivers whose first NASCAR Cup Series win was the Daytona 500

Drivers whose first two career wins were the Daytona 500

Youngest winners of the Daytona 500