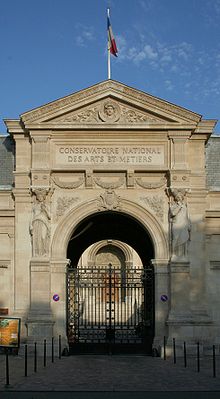 The Conservatoire National des Arts et Métiers (CNAM), or National Conservatory of Arts and Crafts, is a doctoral degree-granting higher education establishment (or grand établissement) operated by the French government, dedicated to providing education and conducting research for the promotion of science and industry. It has a large museum of inventions accessible to the public.

It was founded on October 10, 1794, during the French Revolution. It was first proposed by the abbot Henri Grégoire as a "depository for machines, models, tools, drawings, descriptions and books in all the areas of the arts and trades".[1] The deserted Priory of Saint-Martin-des-Champs (and particularly its Gothic refectory by Peter of Montereau) was selected as the site of collection, which formally opened in 1802.

Originally charged with the collection of inventions, it has since become an educational institution. At the present time, it is known primarily as a continuing education school for adults seeking engineering (multidisciplinary scientific program) and business degrees, proposing evening classes in a variety of topics.

The collection of inventions is now operated by the Musée des Arts et Métiers. The original Foucault pendulum was exhibited as part of the collection, but was moved to the Panthéon in 1995 during museum renovation. It was later reinstalled in the Musée des Arts et Métiers. On April 6, 2010,[2] the cable suspending the original pendulum bob snapped causing irreparable damage to the pendulum and to the marble flooring of the museum.[3]

The novel Foucault's Pendulum by Umberto Eco deals greatly with this establishment, as the Foucault pendulum hung in the museum plays a great role in the storyline. The novel was published in 1989 prior to the pendulum being moved back to the Panthéon during museum reconstruction.[4]

The Conservatoire National des Arts et Métiers is located at 292 rue Saint Martin, in the IIIe arrondissement of Paris, in the historical area of the city named Le Marais.

The Conservatoire National des Arts et Métiers (Cnam) is a public institution of the French government, in the scientific, cultural and professional fields, with the status of "Grand Etablissement". Under the supervision of the Ministry of Higher Education, it has 3 missions:

It is implemented in more than 150 cities in France and abroad. Cnam's motto is "Omnes docet ubique", which means "He (or it) teaches everyone everywhere."

To improve the readability of its service offerings, modernize its management, and promote the development of cross-actions, Cnam was organized in 4 poles of education and research:

The Cnam is dedicated to the training throughout life. It gives everyone the means to be trained at any time in his or her career:

All teachings are formatted to comply with the CNAM LMD (Licence-Master-Doctorate), and thus respecting the European Credit Transfer System.