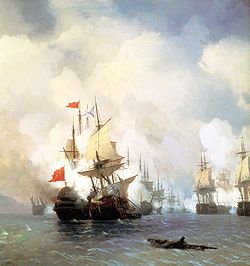 The Orlov Revolt (1770) was a precursor to the Greek War of Independence (1821), which saw a Greek uprising in the Peloponnese at the instigation of Count Orlov, commander of the Russian Naval Forces of the Russo-Turkish War. In Greece it is known as the Orlov events (Greek: Ορλωφικά).[1]

Wishing to weaken the Ottoman Empire and establish a pro-Russian Greek state in the Balkans, Russian emissaries were sent to Mani in the mid-1760s, to make a pact with the local leaders who represented the strongest military force in Greece at the time. Russian emissaries also contacted Daskalogiannis in Crete. In 1769, during the Russo-Turkish War, a fleet of 14 warships commanded by count Aleksey Grigoryevich Orlov sailed from the Baltic Sea for the Mediterranean. The fleet reached Mani in February 1770, prompting the Maniots to raise their war flags. 50 Russian soldiers remained to help fight in the ground war, while the fleet sailed on to the Aegean Sea.

The Greek army was initially successful, quickly liberating large portions of Morea. The revolt however failed to effectively spread in the rest of Greece—with the notable exception of Crete, under the leadership of Ioannis Vlahos (known as Daskalogiannis). Unfortunately, the support promised by the Russian emissaries never arrived at Crete and Daskalogiannis was left to his own devices.

With the assistance of Greek islanders, the Russian fleet was able to score a major victory against the Turkish Navy in the Battle of Cesme, but this did not help the Greek army in Morea. As the Russians failed to bring the forces they promised, the revolt was soon crushed.

From the Russian point of view, Count Orlov's mission was a success, damaging the Turkish Fleet, directing Turkish troops south, and contributing to the victory that led to the signing of the Treaty of Kuchuk-Kainarji.

From the Greek point of view, the affair was a failure which cost a huge number of lives (both in battle, and in the Turkish reprisals that followed). The Greeks were effectively forgotten in the Treaty of Kuchuk-Kainarji, and they became increasingly distrustful of the Russians as a result. While Greek connections to Russia remained strong (in part because of the influence of prominent Greeks in Russia), many among the next generation of Greek leaders (such as Petrobey and Kolokotronis) would look to the West for alliances.