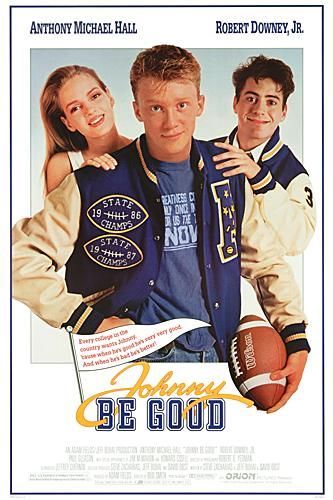 "Johnny Be Good" is a , directed by film editor Bud S. Smith, in his only film in the director's chair. It stars as the main character Johnny Walker, , Steve James, and . Former quarterback makes a cameo appearance.

and , among others, contributed to the soundtrack. The title track, "", originally recorded by , was re-recorded by for the movie.

Johnny Walker () is the top high school prospect who is heavily recruited by many schools. His best friend, Leo Wiggins (), thinks he should hold out for the best offer. His girlfriend, Georgia (), wants him to go to State with her and get a solid education. The colleges offer him everything he could possibly want---girls, cars, cash, free room and board, etc. Although he has all the skills a coach would want in a quarterback, he is unsure where he wants to go. Johnny lives with his mother, grandfather and younger brother and sister. Johnny is offered everything and anything by every interested college except for the local State College, which he chooses in the end of the movie, as he decides that college is not just for football.

* Every college in the country wants Johnny. 'Cause when he's good he's very very good. And when he's bad he's better!