The Museum of Contemporary Art, Los Angeles (MOCA) is a contemporary art museum with three locations in greater Los Angeles, California. The main branch is located on Grand Avenue in Downtown Los Angeles, near Walt Disney Concert Hall. MOCA's original space, initially intended as a "temporary" exhibit space while the main facility was built, is now known as the Geffen Contemporary, in the Little Tokyo district of downtown Los Angeles. The Pacific Design Center facility is in nearby West Hollywood.

In a 1979 political fund raising event at the Beverly Hills Hotel, Los Angeles Mayor Tom Bradley, Councilman Joel Wachs, and local philanthropist Marcia Simon Weisman happened to be seated at the same table. Throughout the evening, Weisman passionately discussed the city's need for a contemporary art museum. In the following weeks, the Mayor's Museum Advisory Committee was organized. The committee, led by William A. Norris, set about creating a museum from scratch, including locating funds, trustees, directors, curators, a gallery, and most importantly an art collection.

The following year, the fledgling Museum of Contemporary Art was operating out of an office on Boyd Street. The city's most prominent philanthropists and collectors had been assembled into a Board of Trustees in 1980, and set a goal of raising $10 million in their first year. A working staff was brought together; Richard Koshalek was appointed chief curator; relationships were made with artists and galleries; and negotiations were begun to secure artwork and an exhibition space. Following Weisman's initiative, $1-million contributions from Eli Broad, Max Palevsky, and Atlantic Richfield Co. helped securing the construction of a the new museum.[3]

MOCA is known for thematic-survey exhibitions about postwar art such as "Hall of Mirrors: Art and Film since 1945" (1996) and "Art in the Streets" (2011). The museum also organized the first major museum retrospectives of the work of John Baldessari (1990), Ad Reinhardt (1991), Jeff Wall (1997), and Barbara Kruger (1999). In addition there were also monographic shows like an ambitious installation by Robert Gober in 1997, or a revelatory survey of Sigmar Polke's photographic work in 1995. Since many of those shows traveled to New York and other cities in the U.S., like the show of Robert Rauschenberg combines that opened in Los Angeles in 2006, MOCA became known as "one of the greatest feeder museums in the country".[6] In 2010, the museum commissioned artist and director Julian Schnabel to curate a survey of works by actor and artist Dennis Hopper.

The MOCA downtown Los Angeles location is home to almost 5,000 artworks created since 1940, including masterpieces by classic contemporary artists, and inspiring new works by emerging and mid-career artists from Southern California and around the world. The MOCA is the only museum in Los Angeles devoted exclusively to contemporary art.[1]

The construction and $23 million cost of the MOCA Grand Avenue building was part of a city-brokered deal with the developer of the $1 billion California Plaza redevelopment project on Bunker Hill, Bunker Hill Associates, who received the use of an 11-acre (45,000 m2), publicly owned parcel of land.[8][9] The project broke ground in 1983 and completed the museum, Omni Hotel and the first of two skyscrapers (One California Plaza) by 1986. The second skyscraper (Two California Plaza) was completed in 1992.[10] Nancy Rubins' monumental stainless-steel sculpture "Mark Thompson's Airplane Parts" (2001), purchased by MOCA in 2002, was installed at the museum's plaza.

The Grand Avenue location is used to display pieces from MOCA's substantial permanent collection, especially artists who did much of their work between 1940 and 1980. There is also an extensive set of rooms used to display temporary exhibits, usually a major retrospective of an important artist, or works connected by a theme.

The Geffen Contemporary at MOCA

While the Grand Avenue facility was being planned and under construction, MOCA opened an interim exhibition space called the "Temporary Contemporary" in the fall of 1983. The first public program was a commissioned collaboration, "Available Light" by Lucinda Childs, Frank O. Gehry and John Adams followed in November 1983 by the inaugural exhibition, "The First Show: Painting and Sculpture from 1940–1980" curated by Julia Brown. The building had been originally constructed in the 1940s as a hardware store and subsequently used as a city warehouse and police car garage, the "TC", as it became informally known, is leased from the city for five years for $1 a year.[8]

Southern California architect Frank Gehry led the renovation of the Albert C. Martin, Sr.-designed 1947 Union Hardware buildings. Gehry left the exteriors intact, except for new entrance doors, and built a canopy of chain-link fencing and steel trusses over the closed-off street, to form a partially shaded plaza. There are two large, open gallery spaces, illuminated by industrial wire-glass skylights and a row of clerestory windows along the south wall. The intricate structural network of steel beams and supports has been left exposed, serving as support for the many movable display walls and lending a sculptural effect. A steel crane rail, left over from the building's hardware days, remained in place. The loading docks now serve as the lobby.[10] The Temporary Contemporary immediately captivated critics and museum patrons alike with its accessibility, informality and lack of pretension. Writing in The New York Times, John Russell referred to it as "a prince among spaces", and William Wilson of the Los Angeles Times wrote that it "instantly had the hospitable aura of a people's museum." In the view of many, these two appraisals have been borne out in the ensuing years.

Due to the popularity of the Temporary Contemporary and extraordinary suitability of the building for exhibiting contemporary art, the museum's board requested that the City of Los Angeles extend MOCA's lease on the facility for 50 years, until 2038. That request was granted in early 1986, and in 1996 the city extended the lease even further. Also in 1996, MOCA received a $5-million gift from The David Geffen Foundation in support of the museum's endowment drive, and in recognition of this extraordinary gift, the Temporary Contemporary was renamed The Geffen Contemporary at MOCA.

The site is the largest of the three MOCA locations and is ideally suited to large-scale sculptural works and conceptual, multi-media or electronic installations. It is typically used to display more recent works, often by lesser known artists, and works which require a large amount of space. Some of these works are designed specifically for the Geffen Contemporary's space.

MOCA at The Pacific Design Center 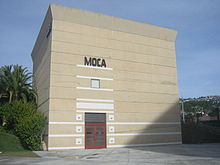 MOCA at the Pacific Design Center

In 2000, MOCA opened a 3,000 sq ft (280 m2). exhibition space at the Pacific Design Center in West Hollywood to present new work by emerging and established artists as well as ancillary programs based upon its major exhibitions and renowned permanent collection. A recent focus has been on design and architecture. MOCA also utilizes the 384-seat PDC auditorium for a range of public programs.

On the first Sunday of each month from 1pm to 3:30pm, Sunday Studio workshops typically begin with an interactive, discussion-based "spotlight" tour, highlighting selected works from a current exhibition. Next, participants of all ages work collaboratively to create art in response to the work they've seen.

Designed and taught by artists, these innovative, process-oriented workshops extend the gallery experience and frequently include special activities such as musical performance, movement, and other multidisciplinary approaches to works on view. The program is offered in English and Spanish.

Big Family Day is an annual spring culminating event for all of MOCA's school and community partnership programs. Featuring student docents, entertainment, music, artmaking and a student art exhibition, this event usually attracts over 1,000 participants, including MOCA members, their families, and the community at large.

Sunday Studio events are held at Grand Avenue unless otherwise stated in the bimonthly calendar or on the website.

Teens of Contemporary Art is an open gathering of high school students interested in learning more about contemporary art with their peers. The group meets each month for exhibition explorations, art workshops, discussions about contemporary art, and events planning. An advisory council of teens identifies the topics and issues addressed at the monthly sessions. All TOCA participants get free admission to the museum.

TOCA events are the second Sunday of every month.

Each year the MOCA Apprenticeship Program (MAP) creates a supportive artistic community for a small, diverse group of high school students. During this nine-month internship program, apprentices meet weekly with MOCA staff and guest artists, undertake individual and self-directed projects throughout the museum and discover more about contemporary art, MOCA, and their own professional future. Apprentices are considered staff and are paid an hourly wage. MAP participation is available by application only. Applications are available and due in the spring of each year.

Engagement Party is a free public program that presents new work by emerging Southern California–based artists working collectively and collaboratively. The program offers artist collectives three-month residencies during which they present public programs at MOCA Grand Avenue or the Geffen Contemporary at MOCA on the first Thursday of each month from 7 to 10pm. Collectives may employ any medium, discipline, or strategy during their residency, resulting in programs that may include performances, workshops, screenings, lectures, or any other activity emerging from the group's particular focus.

Participants have included Knifeandfork, Ryan Heffington + the East Siders, and The League of Imaginary Scientists

In December, 2008, newspapers reported that the museum is in a serious financial crisis, having lost $44 million of their $50 million endowment over nine years.[11] Eli Broad, MOCA's founding chairman from 1979 to 1984 and life trustee of the museum, offered $30 million in a staggered donation, $15 million as matching donations. An agreement with Broad was tentatively reached on December 18, but another possibility—a merger with the Los Angeles County Museum of Art—had not been ruled out.[12] On December 23, the museum announced that it had accepted Broad's offer and would be making a number of significant changes to its leadership. Director Jeremy Strick resigned, and a new position of chief executive officer was created for Charles E. Young, former chancellor of the University of California, Los Angeles.[13] Broad required compliance with strict financial terms, but did not demand Strick's resignation or Young's appointment as a condition.[14]