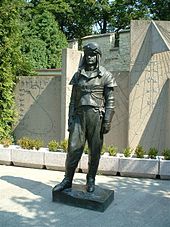 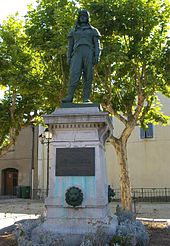 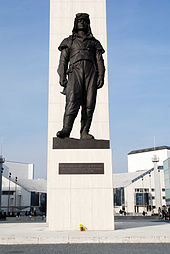 pronunciation (help·info); July 21, 1880 in Košariská (Kosaras), Kingdom of Hungary – May 4, 1919 in Ivanka pri Dunaji, Czechoslovakia) was a Slovak politician, diplomat, and astronomer. During World War I, he was General of the French Army, at the same time the Czechoslovak Minister of War, one of the leading members of the Czechoslovak National Council (i.e. resistance government), and he contributed decisively to the cause of Czechoslovak sovereignty. (The status of Czech- and Slovak-populated territories, among others, was in question until shortly before the disintegration of Austria-Hungary in 1918.)

Štefánik was born in Košariská, Kingdom of Hungary, on July 21, 1880.[1] He had 12 brothers and sisters (2 of which died at a young age). His father was a local Protestant Lutheran pastor called Pavol Štefánik and his mother's name was Albertína Jurenková. As a strong Slovak patriot, he had problems at Hungarian schools (Slovak ones were prohibited due to active Magyarization) and had to change high schools several times (Pressburg, Sopron, Szarvas ).[1]

In 1898, he began studying construction engineering in Prague. In 1900 he moved to the Charles University where he attended lectures in astronomy, physics, optics, mathematics and philosophy.[1] In the 1902 summer semester he was at university in Zürich.[2] The Prague years had a great impact on Štefánik, because he met many important personalities there: the philosophy lectures were taught by Tomáš Garrigue Masaryk (the future first president of Czechoslovakia), who inspired Štefánik with the idea of cooperation of the Czechs and the Slovaks. Furthermore, Štefánik very actively participated in the work of the Slovak student association Detvan (and within Detvan of the so-called Hlasists group) where he became acquainted with Vavro Šrobár. His studies were largely financed by Czech associations including Českoslovanská jednota (Czechoslavic Unity) and Radhošť - he himself could not afford them. In Prague, he wrote political and artistic texts, in which he tried to inform the Czechs of the disastrous situation of the Slovaks at that time. He graduated in 1904 with a doctor’s degree in philosophy and with thorough knowledge of astronomy (he finished his studies with a thesis in astronomy). He wrote his thesis about a star which was discovered in the Cassiopeia constellation in 1572.[1]

France, Tahiti and other countries [1]

In 1904, he went to Paris to find a job in astronomy with the recommendation of a Czech professor who was known in Paris. Initially, he had no money and no command of French, but then he got a job at the famous Observatoire de Paris-Meudon, whose director, Pierre Janssen (one of the co-founders of astrophysics), saw Štefánik’s talent. Štefánik owed to Janssen and Camille Flammarion his social, political and scientific career. The observatory was the most important centre for astronomy at this time which meant a huge prestige in his job.

Between 20 June and 4 July in 1905, Štefánik climbed Mont Blanc (later he climbed it several times) in order to observe the Moon and Mars from it. Then he took part in an official French expedition which observed and recorded a whole eclipse of the Sun in Alcossebre in Spain. Thereby he established his own recognition in the French scientific society. He worked with Gaston Millochau who was a member of the Académie Française, so some of its members read from his work. -His studies and the results of his observations were published in reports to the Académie Française and he received several awards for them - Later he was invited to an international astronomer conference in Oxford which was interested in research of the Sun. Between 1906 and 1908, he was co-director of Mont Blanc observatories company.

At the end of 1907, however, Pierre Janssen died and Štefánik had to change his job. Since 1908, he had been charged by the French authorities with astronomic and meteorological observations (mainly observations of sun eclipses) and political tasks in various countries all over the world including (Algeria, Morocco, Turkistan, Russia, India, the USA, Panama, Brazil, Ecuador , Australia, New Zealand, Tahiti, Fiji and Tonga). In Tahiti, he also built an observatory and a meteorological stations network. Between these voyages he regularly returned home to Košariská (the last time in 1913 for his father’s funeral). When he was in South America (especially in Galapagos Islands in Ecuador), he had an opportunity to show his diplomatic skills for the first time.

Štefánik dealt with astrophysics, solar physics and became well-known for his spectral analysis of the sun's corona. He was involved in perfecting spectrography and has been considered a predecessor of Bernard Lyot. He also attempted to construct a machine for color photography and cinematography and had his design patented in 1911.

In addition to his scientific missions overseas, he also performed diplomatic tasks. He established contacts and friendship with leading scientific, artistic, political, diplomatic and business personalities. He participated in the establishment of business enterprises in France and other countries. His friends were Henri Poincaré physicist, count Eugéne Aymar de la Baume, Joseph Vallot (who was the richest man in France), Gustave Eiffel architect, prince Roland Bonaparte, Camille Chautemps Prime-Minister, a French big entrepreneur called Devousoud from Chamonix, Simon Newcomb American astronomer and admiral, David Jayne Hill American diplomat. In 1912, he received French citizenship, recognition and access to the French elite. In 1914, he was made a Grand Officier of the Legion of Honour. At the same time, however, he had some personal problems and a serious stomach illness (which did not get better even after a medical operation). Moreover, World War I started in Europe.

World War I and struggle for independence 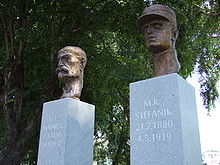 Štefánik believed that the defeat of Austria-Hungary and Imperial Germany, after the outbreak of the First World War, would offer the opportunity for the Slovaks and Czechs to gain independence from Austria-Hungary. Therefore he enlisted in the French army and trained to become an aviator. He was sent as a pilot to Serbia in May 1915 and flew a total of 30 missions over enemy territory. The Serbian campaign was unsuccessful, but French aviator Louis Paulhan is credited with the world's first "medevac" when he flew the seriously ill Milan Stefanik to safety.[3]

He returned to Paris at the end of 1915 where he became acquainted with Edvard Beneš and renewed his association with his former professor Tomáš Masaryk. In 1916, these three men founded the Czechoslovak National Council (the supreme body – government - of Czecho-Slovak resistance abroad leading to the creation of Czechoslovakia in 1918). After 1917, he became the vice-president of the council. Thanks to his diplomatic skills, Štefánik helped Masaryk and Beneš to meet and obtain the support of some of the most important personalities of the Triple Entente. He for example organized Masaryk’s meeting with the French prime minister Aristide Briand.

In 1916, Štefánik and the Czecho-Slovak resistance started to create Czechoslovak troops (legions) that would fight against Austria-Hungary and Germany. For this purpose, Štefánik (as the Czechoslovak Minister of War and as a French General) went to Russia and then (in February 1917) to the USA. He also organized legions in France and Italy. It was largely due to his personal diplomatic skills and contacts that the Allies (Entente) recognized the Czechoslovak National Council as a government-de-facto and the Czechoslovak troops as allied forces in the summer and autumn 1918. In May 1918, Štefánik went to Siberia in Russia, where he was supposed to make the Czechoslovak legions there renew the second, i. e. Eastern, front (because Russia had switched the sides and signed peace with Germany and Austria-Hungary in March 1918, and Czechoslovak legions very successfully rebelled against a subsequent Russian order to disarm, thus showing their abilities to the Allies). But in Russia, Štefánik saw that this was not possible anymore.

In January 1919, when the war ended, Štefánik went from Russia to France and Italy, where he organized the retreat of Czechoslovak troops from Siberia in March in Paris. In addition, his diplomatic skills were needed in order to solve quarrels between the French and Italy missions in Czechoslovakia. In April, he went from Paris to Rome to negotiate at the Italian Ministry of War, where he also met his fiancée Juliana Benzoni for the last time. Then he went to the main Italian military base in Padua, where he agreed with General Armando Diaz on the dissolution of the Italian military mission in Czechoslovakia. At the same time, severe quarrels arose between Štefánik and Beneš (but also Masaryk), mainly around the position of Slovakia within Czechoslovakia. In April, for example, Beneš wrote to a county president in Slovakia: "I had a conflict with Štefánik. . . Everything is over between us. I mean absolutely (over). But keep it totally secret...".[citation needed] 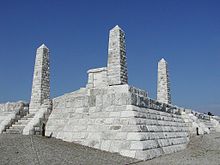 Finally, Štefánik wanted to return home to see his family. He decided to fly from Campoformido by Udine in Italy and to use an Italian military plane, a Caproni 450. On May 4, 1919 around 11am, his plane tried to land near Bratislava (which was a military conflict area between the First Republic of Czechoslovakia and the Hungarian Soviet Republic at that time), but crashed near Ivanka pri Dunaji. Štefánik died along with two Italian officers. The reason for the plane crash is disputed. The official explanation at that time was that the airplane crashed due to bad weather accidentally. "Just at that time Šrobár and all his government left Bratislava to Skalica to plant trees as a memorial of the founding of the new Czechoslovak Republic.[4] It is also unlikely that[clarification needed] his plane was shot down by Hungarian communists standing on the middle of the Franz Joseph bridge of Bratislava.[4] Štefánik’s sudden death, in combination with his preceding quarrels with Beneš, contributed to Slovak suspicion towards the Czechs during the First Republic of Czechoslovakia.[4] File:Pamatnik Milana Rastislava Stefanika.jpg Štefánik's tomb was built in 1927-28 on the Bradlo hill in Brezová pod Bradlom. The monumental yet austere memorial was designed by Dušan Jurkovič.