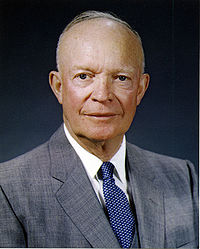 The Federal-Aid Highway Act of 1956, popularly known as the National Interstate and Defense Highways Act (Public Law 84-627), was enacted on June 29, 1956, when Dwight D. Eisenhower signed the bill into law. With an original authorization of 25 billion dollars for the construction of 41,000 miles (66,000 km) of the Interstate Highway System supposedly over a 20-year period, it was the largest public works project in American history through that time.[1]

The money for the Interstate Highway and Defense Highways was handled in a Highway Trust Fund that paid for 90 percent of highway construction costs with the states required to pay the remaining 10 percent. It was expected that the money would be generated through new taxes on fuel, automobiles, trucks, and tires. As a matter of practice, the Federal portion of the cost of the Interstate Highway System has been paid for by taxes on gasoline and diesel fuel.

Eisenhower's support of the Federal-Aid Highway Act of 1956 can be directly attributed to his experiences in 1919 as a participant in the U.S. Army's first Transcontinental Motor Convoy across the United States on the historic Lincoln Highway, which was the first road across America. The highly publicized 1919 convoy was intended, in part, to dramatize the need for better main highways and continued federal aid. The convoy left the Ellipse south of the White House in Washington D.C. on July 7, 1919, and headed for Gettysburg, Pennsylvania. From there, it followed the Lincoln Highway to San Francisco. Bridges cracked and were rebuilt, vehicles became stuck in mud, and equipment broke, but the convoy was greeted warmly by communities across the country. The convoy reached San Francisco on September 6, 1919.

The convoy was memorable enough for a young Army officer, Lt. Col. Dwight David Eisenhower, to include a chapter about the trip, titled "Through Darkest America With Truck and Tank," in his book At Ease: Stories I Tell to Friends (Doubleday and Company, Inc., 1967). "The trip had been difficult, tiring, and fun," he said. That experience on the Lincoln Highway, plus his observations of the German autobahn network during World War II, convinced him to support construction of the Interstate System when he became President. "The old convoy had started me thinking about good, two-lane highways, but Germany had made me see the wisdom of broader ribbons across the land." His "Grand Plan" for highways, announced in 1954, led to the 1956 legislative breakthrough that created the Highway Trust Fund to accelerate construction of the Interstate System.

Eisenhower argued for the highways for the purpose of national defense. In the event of a ground invasion by a foreign power, the U.S. Army would need good highways to be able to transport troops across the country efficiently. Following completion of the highways the cross-country journey that took the convoy two months in 1919 was cut down to two weeks.

A significant side effect of the Interstate Highway Act was the direct subsidization of the suburban highway system, making commutes between urban centers to suburbs much quicker, furthering the flight of citizens and businesses and divestment from inner cities, and compounding vehicle pollution and excessive petroleum use problems. Growth of the suburbs has also led to a continual cycle of widening these highways, digging them up to be completely rebuilt, and then widening them again - a continual "money pit" for tax funds, with the widenings and re-buildings costing far more than the original highways did.

The bypass or loop routes of the Interstate Highway System have become unintended, but nearly universal, conduits for both residential and business growth in the suburbs. Besides many widenings and rebuildings, for some cities, there have been requirements for very costly new bypasses and loops outside of the original ones. This fact of urban growth around the bypasses has been particularly salient in these metropolitan areas: Atlanta, Baltimore, Boston, Chicago, Cincinnati, Cleveland, Dallas, Denver, Fort Worth, Houston, Indianapolis, Jacksonville, Kansas City, Los Angeles, Memphis, Minneapolis - St. Paul, Nashville, Portland, Richmond, Salt Lake City, San Antonio, San Diego, San Francisco, Seattle, St. Louis, Tampa, and Washington, D.C..

Numerous spur highways have also been added to the System to connect it with major metropolitan airports, such as the Baltimore-Washington International Airport.