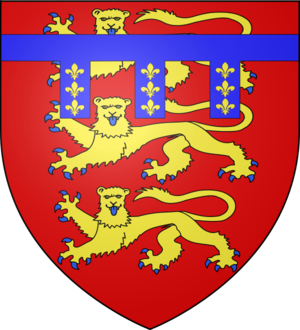 Henry Plantagenet, 3rd Earl of Lancaster (1281 &ndash; , ) was an English nobleman, one of the principals behind the deposition of Edward II.

Henry's elder brother succeeded their father in 1296, but Henry was summoned to Parliament on , /99 by writ directed "Henrico de Lancastre nepoti Regis", by which he is held to have become Lord Lancaster. He took part in the siege of Carlaverock in July 1300.

Petition for succession and inheritance

On the Queen’s return to England with in September 1326, Henry joined her party against King Edward II, which led to a general desertion of the King’s cause and overturned the power of and his namesake son .

He was sent in pursuit and captured the king at Neath in South Wales. He was appointed to take charge of the King, and was responsible for his custody at .

After Edward II's death Henry was appointed guardian of the new king , and was also appointed captain-general of all the King's forces in the .

He was succeeded as Earl of Lancaster and Leicester by his eldest son, , who subsequently became Duke of Lancaster.

Prior to his restoration to his earldoms, Henry bore the arms of the kingdom, differenced by a "bend azure". Upon his restoration, his difference changed, to a "label France of three points (that is to say azure three fleur-de-lys or, each)". [ [http://www.heraldica.org/topics/britain/cadency.htm Marks of Cadency in the British Royal Family] ]

Henry and Maud had seven children: