If These Walls Could Talk

If These Walls Could Talk

Infobox Film
name = If These Walls Could Talk 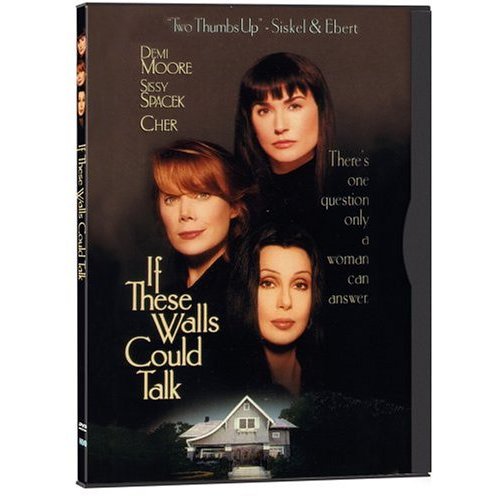 music =
cinematography =
editing =
distributor = Home Box Office Home Video
released = , 1996
runtime = 95 min
country = flagicon|USA USA
language = English
budget =
preceded_by =
followed_by = "" (2000)
website =
amg_id = 136782
imdb_id = 0116607:"For the episode of The Outer Limits, see "."If These Walls Could Talk" is a 1996 Golden Globe and -nominated , broadcast on . It follows the plights of three different women and their experiences with . Each of the three stories takes place in the same house in three different years: , , and . All three segments were co-written by . Savoca directed the first and second segment while directed the third.

The women's experiences in each vignette are designed to demonstrate the popular views of society on the issue in each of the given decades. The film became a surprise success, and was HBO's highest rated movie ever. The film's success was followed by an international release, and spawned a sequel, "" (), starring , Michelle Williams, and , which deals with in three different eras.

The films "Common Ground" (2000) and "The Hours" (2002) would also use a similar format to address the issue of as "If These Walls Could Talk". , who starred in the 1996 segment went on to direct the sequel, which received an .

The 1952 segment deals with Claire Donnelly (), a widowed nurse living in suburban , who becomes pregnant by her brother-in-law and decides to undergo abortion in order not to hurt her late husband's family. However, abortion at the time is strictly illegal. Donnelly eventually finds another nurse () who provides her the name of a woman who can find her someone who will perform the abortion. She finally manages to abort, but dies shortly after due to hemorrhage.

The 1974 segment deals with Barbara Barrows (), a struggling and aging mother with four children, who discovers she must welcome another addition to the family, despite having recently gone back to college. She considers abortion with the support of her teenage daughter () but ultimately chooses to keep the child.

The 1996 segment deals with Christine Cullen (), a college student who got pregnant by her married professor decides on an abortion when he breaks up with her and only offers her money. She is operated on by Dr. Beth Thompson (). However, the abortion takes place during a violent protest, and an abortion protester () walks in on the operation and shoots Dr. Thompson.