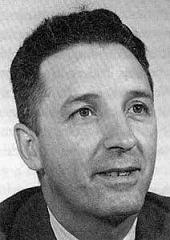 Farrell Dobbs (, &ndash; , ) was an American and trade unionist.

Born in , where his father was a worker in a . They moved to Minneapolis, and he graduated from North High School in 1925. In 1926, he left for to find work, but returned the following fall. At this point, young Farrell Dobbs was a conservative Republican and supported for President. However, his political viewpoint was changed during the in the 1930s. Seeing the plight of workers in that situation (including himself), he became politically radicalized to the left.

In 1933, while working for the Pittsburgh Coal Company in , Dobbs joined the and after getting to know the three Trotskyist Dunne brothers, (Miles, Vincent & Grant Dunne) and Swedish socialist , he joined the . Dobbs was one of the initiators of a general strike in Minneapolis, and for a while worked full-time as a union organiser, but quit in 1939 to work for the new Socialist Workers Party (SWP).

Just like the SWP leader, , Dobbs became a personal friend of the Russian revolutionary leader , whom he visited in shortly before Trotsky's death in 1940.

For opposing , he and other leaders of the SWP and the Minneapolis Teamsters were convicted of violating the , which made it illegal to "conspire to advocate the violent overthrow of the US Government." He served over a year in Sandstone Prison during the end of World War II (1944-1945).

Farrell Dobbs retired in 1972 but remained in the party to his death.

Dobbs was the author of a four-volume history/memoir of the Minneapolis struggles, "Teamster Rebellion", "Teamster Power", "Teamster Politics" & "Teamster Bureaucracy", and had completed two volumes of a planned history of the movement in the United States at the time of his death, called "Revolutionary Continuity: The Early Years, 1848-1917" & "Birth of the Communist Movement, 1918-1922".