Infobox Film
name = Away from Her 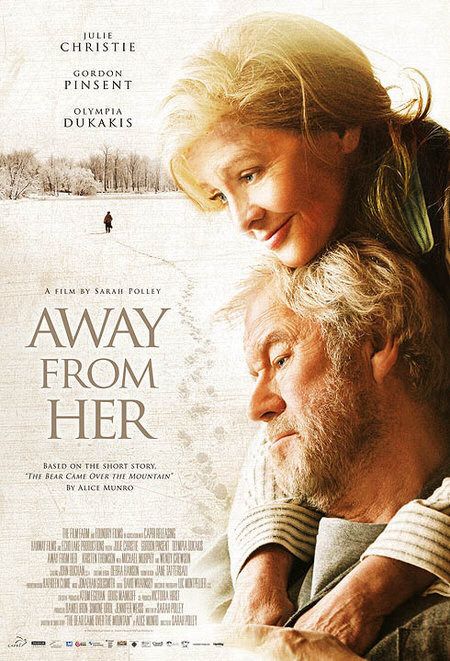 with Michael Murphy
and
director =
producer =

"Away from Her" is a English-Canadian film directed by which debuted at the 2006 and also played in the Premier category at the . The feature-length directorial debut of Canadian actress , the film is based on 's short story "The Bear Came over the Mountain", from the collection "". It was executive produced by (Polley's director in both "" and "") and distributed by .

The film stars and as a couple whose marriage is tested when Christie's character begins to suffer from and moves into a , where she loses virtually all memory of her husband and begins to develop a romance with another nursing home resident. The cast also includes , Michael Murphy, , , and . The film was shot in .

Grant (Pinsent) and Fiona (Christie) are a retired married couple living in rural . Fiona begins to lose her memory, and it becomes apparent she suffers from .

When she feels she is becoming a risk to herself, Fiona decides to check into a nursing home, where one of the rules is that a patient can not have any visitors for 30 days, in order to "adjust". Unsure of this policy, Grant agrees anyway, at the insistence of his wife whom he loves.

When the 30 day period ends, Grant goes to visit his wife again, only to find she has forgotten him, and turned her affections to Aubrey (Murphy), a mute cripple who has become her "coping partner" in the facility.

While seeing his wife grow closer to her coping partner, Grant takes on a role of an unhappy voyeur when visiting his wife, who remembers less of their love with each visit. After some time, Aubrey's wife removes him from the home due to financial difficulties. This causes Fiona to sink into a deep depression, with her mental condition also appearing to deteriorate. Grant sees this, and as an act of loving sacrifice visits Aubrey’s wife Marian (Dukakis) in an effort to allow Fiona to see Aubrey again. She initially refuses, but the meeting leads to a tentative relationship between the two.

As time passes, Grant continues to visit both Fiona and Marian. He eventually succeeds in taking Aubrey back to visit his wife, but in his "moment alone" before he brings Aubrey into Fiona's room, Fiona temporarily remembers him and the love she has for him. The film closes on their embrace.

Sarah Polley was on a flight back from working on 's "No Such Thing" in Iceland when she read the Alice Munro short story "The Bear Came Over the Mountain" in "". "I was so unbelievably moved by the story. I was just finished working with Julie Christie, and as I read, I keep seeing Julie's face in the character of Fiona," said Polley. "I am certainly not one of those people who reflectively thinks about adapting stories; I just want to leave the things I love alone. But this fascinated me. I read the story and I saw the film and I knew what the film was."

At that point of Polley's career, she has been acting since the age of six, and had written and directed two short films, "Don't Think Twice" and "The Best Day of my Life". "For two years, I couldn't get the story out of my head and finally asked producer Danny Iron to look into getting the rights. I threw myself into writing, but it's daunting, taking on the work on somebody you respect so much. Alice Munro is one of my favorite writers because she looks right through things. The characters are all so flawed, so lovable in certain moments and so detestable in others. The adaptation didn't feel like a huge process because the film was embedded in that story."

Working alongside Polley were producers Jennifer Weiss, with whom she made her Genie-award winning short "I Shout Love", and Simone Urdl, partners in the production company The Film Farm, and Daniel Iron of Foundry Films who produced Polley's first short "Don't Think Twice". served as executive producer. Daniel Iron, having known Polley for a very long time, never doubted her ability to direct a feature. "I know how fiercely intelligent and diligent she is. She's been on sets since she was young and knows the craft better than any first time director. She shot-listed her first draft of the script."

The film received vastly favorable reviews from critics. As of , , the review aggregator reported that 95% of critics gave the film positive reviews, based on 128 reviews. [cite web|url=http://www.rottentomatoes.com/m/away_from_her/ |title=Away from Her - Rotten Tomatoes |accessdate=2008-01-06 |publisher=] reported the film had an average score of 88 out of 100, based on 36 reviews. [cite web|url=http://www.metacritic.com/film/titles/awayfromher |title=Away from Her (2007): Reviews |accessdate=2008-01-06 |publisher=]

The film won 7 out of 8 for which it was nominated [cite web|url=http://www.reuters.com/article/filmNews/idUSN0336860220080304?sp=true |title="Away From Her" dominates Canada's Genie Awards |accessdate=2008-03-08 |author=John McCrank |date= |publisher=] , in the categories of Best Motion Picture, Best Director, Best Actor (Pinsent), Best Actress (Christie), Best Supporting Actress (Thomson), Best Adapted Screenplay and the for best feature film by a first-time director. [cite web|url=http://www.thestar.com/entertainment/article/309044 |title=Away From Her tops Genies |accessdate=2008-03-08 |author=Philip Marchand |date= |work=] The only award it did not win was for Best Editing, which it lost to "".

"Away From Her" was the third film in Genie Award history, after "" and "", to win both the Claude Jutra Award and the Best Picture Genie in the same year.