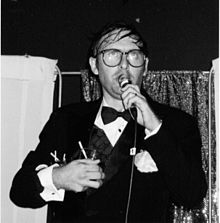 Hamburger's live act, which is quite different from his many albums, features a barrage of question/answer jokes aimed often at celebrity targets, including Paris Hilton, Britney Spears, The Red Hot Chili Peppers, Michael Jackson, Smash Mouth, Crosby, Stills, and Nash, Jim Morrison, and Steven Tyler, as well as depressing barbs aimed at his ex-wife. His pacing is off, and he clears his throat nonstop through his entire routine, often to keep overzealous fans from shouting out his punchlines. He has performed in front of audiences worldwide from Madison Square Garden to Jimmy Kimmel Live and the confrontational aspects of his act have drawn cursory comparisons to Tony Clifton.[2] One of his most famous gags is the "Zipper Lips", in which he asks an audience member a question. If the audience member doesn't respond, Hamburger derides them for being a "zipper lips". A common phrase used by the comedian is "But that's my life!"

His first full length, America's Funnyman, was released in 1996. He has released a number of albums on the Drag City record label.

Hamburger is a frequent guest on the internet talk show Tom Green's House Tonight. In 2006, Hamburger started doing his own show called Poolside Chats with Neil Hamburger on The Channel at Tomgreen.com. Guests on his show have included Tim and Eric, Kyle Gass of Tenacious D, Buzz Osborne of The Melvins, and Bonnie 'Prince' Billy.

Hamburger also appeared in a series of three video advertisements promoting the release of the 2006 album by Drag City stablemate, Bonnie 'Prince' Billy, The Letting Go.

In 2007, Hamburger opened for Tenacious D during their Pick of Destiny Tour. In the movie The Pick of Destiny, he made a brief cameo appearance before Tenacious D came on stage to perform. He has already performed at Madison Square Garden, a show that the New York Times referred to as likely "the greatest night of his career."[citation needed] However, his performance was poorly received elsewhere, with booing and heckling ensuing in countries such as Ireland and England[citation needed]. 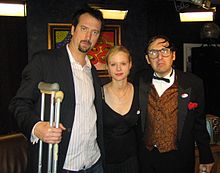 The Australian punk band Frenzal Rhomb have used Hamburger to open their sets and appear in their video clips for their songs "Punisher" and "Ballchef", and Frenzal Rhomb members Jay and the Doctor have called him live on air on their radio show on the network Triple J to report on current events in America such as award ceremonies.

In 2007, Hamburger appeared in the music video for "Conspiracy of the Gods" by the band Trans Am.

In September of 2007 and 2010, he appeared at the Global ComedyFest in Vancouver, Canada. In 2010, he appeared at Just For Laughs in Montreal, and later that summer, at the Edinburgh Festival Fringe resulting in rave reviews in The Scotsman and The Guardian[citation needed].

In spring of 2008, Drag City released an album of country and western originals and covers recorded by Neil Hamburger in a "celebrity vocals" style. During the sessions, Hamburger was backed by musicians including Prairie Prince of The Tubes and Todd Rundgren's band, David Gleason, Atom Ellis of Dieselhed and The New Cars, Rachel Haden from that dog.

He also recorded a record doing guest lead vocals with Australian band The Hard-Ons while in Sydney in January, 2008.[3]

In August 2010, Hamburger appeared on the Alternative Stage at the Reading Music Festival in the UK, where his entire set was booed and derided by the capacity crowd, with chants of "You're shit and you know you are!". As the set progressed bottles and other projectiles were hurled at Hamburger, before he completed his set. The stage's host, Andrew O'Neill came on after the set, simply asking "Didn't you all enjoy hating that?"[citation needed]

In December 2010, Special Entertainment released an iPhone App called Shaky Advice from Neil Hamburger that functions much like a Magic 8 Ball, with 30 video clips of Hamburger giving comical advice.

The Neil Hamburger character plays the role of Osric in the 2012 film, Hamlet A.D.D., a live action and animated version of William Shakespeare's Hamlet.[4]

Neil Hamburger has performed as the opening act for the following artists.