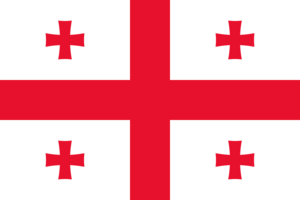 Nickname =
Morenicks =
Use = 110110
Symbol =
Proportion = 100:147
Adoption =
Design = White rectangle, with in its central portion a large red cross that extends to the edge of the flag. In the four corners there are four "bolnur-katskhuri" crosses of the same color. [Decree of the President of GeorgiaNo. 31 of 25 January, 2004.]
Designer = 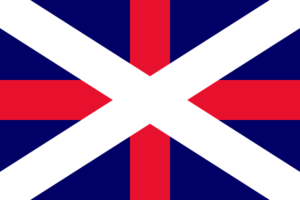 The official of Georgia is the "five-cross flag", restored to official use on , after a break of some 500 years. It was previously the flag of the medieval Georgian kingdom and had been used as the official symbol of the political party.

History of the flag

Originally, the white flag with the single red was used by the Georgian King in the 5th century as the national symbol of the Georgian state and nation. During the golden age of the Georgian kingdom the "five-cross flag" was used since 13th century by Queen . The central element of the flag is St. George's cross (still used as the national ), who is the patron saint of Georgia. According to the Georgian scholar Giorgi Gabeskiria, the four extra crosses were probably added during the reign of (also known as "the Brilliant" or "the Splendid"), who drove out the s. Around that time, the new design was adopted as a variant of the , a symbol used by crusaders in the , which likewise used a large central cross with four smaller "crosslets" in the four quadrants. The crosses are said to have represented the five of .

The flag fell out of use later in the medieval period, but was revived by Georgian patriotic movement following the country's independence from the in 1991. A majority of Georgians, including the influential Catholicos-Patriarch of the , supported the restoration of the flag and in 1999 the Georgian parliament passed a bill to change the flag. However, it was not endorsed by the President, . It was adopted in the late 1990s by the main opposition party, the led by , as a symbol of popular resistance to Shevardnadze's rule.

The flag was adopted by the Georgian parliament on . It was formally endorsed by a presidential decree signed by Saakashvili on , following his election as President of Georgia. Its adoption was not without controversy, as some complained that the adoption of a party's political flag as a national emblem was an undemocratic move.

During Georgia's brief existence as an independent state (the ) from 1918-1921, a tricolor flag was adopted (below left). The design resulted from a national flag-designing contest won by , a painter. It was abolished by the Soviet Union following the 1921 takeover of Georgia but was revived on , by the . It lost popularity thereafter as it became associated with the chaotic and violent period around Georgia's independence from the Soviet Union, especially for ethnic minorities.

During the Soviet period, Georgia adopted a number of versions of the red Soviet flag incorporating either the Georgian Soviet Socialist Republic's name, or a red with a star in a blue sun in canton and blue bar in the upper part of flag (below right). The was abolished by the Georgian government when it declared independence from the Soviet Union in November 1990.