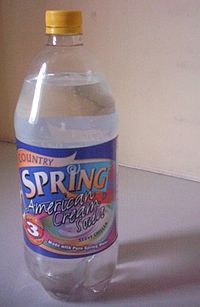 A recipe for cream soda—written by E.M. Sheldon and published in Michigan Farmer in 1852—called for water, cream of tartar, Epsom salts, sugar, tartaric acid, egg, and milk, to be mixed together, then heated, and when cool mixed with water and a quarter teaspoonful of soda (sodium bicarbonate) to make an effervescent drink.[2]

Alexander C. Howell, of Vienna, New Jersey, was granted a patent for "cream soda-water" on June 27, 1865. Howell's cream soda-water was made with sodium bicarbonate, water, sugar, egg whites, wheat flour, and "any of the usual flavoring materials—such as oil of lemon, &c, extracts of vanilla, pine-apple, &c., to suit the taste"; before drinking, the cream soda water was mixed with water and an acid such as tartaric acid or citric acid.[3] In Canada, James William Black of Berwick, Nova Scotia was granted a U.S. patent on December 8, 1885, and a Canadian patent on July 5, 1886, for "ice-cream soda".[4][5] Black's ice-cream soda, which contained whipped egg whites, sugar, lime juice, lemons, citric acid, flavoring, and bicarbonate of soda,[6] was a concentrated syrup that could be reconstituted into an effervescent beverage by adding ordinary ice water.[5] 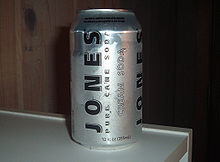 In the United States, cream soda is often clear or colored light brown and vanilla-flavored, but red, pink, orange and blue are also relatively common. In addition, in some places in the U.S. where the drink is made on location, especially in cafes, cream soda consists of soda water, vanilla syrup, and cream or half and half.

In Canada, cream soda is mostly red and tastes like grenadine. Some brands, such as Fanta, market a colorless version. Ohio-based grocery chain Kroger also sells their own brand of red cream soda in the US.

Some American brands are available in Canada as imports.

In Australia, cream soda is generally known as creaming soda (or occasionally creamy soda) by current manufacturers and is generally pink, red or brown. Less commonly, there is a bright yellow type of creamy soda, an example of which is produced by Crows Nest Soft Drinks, or Hartz. The most common manufacturer of creaming soda in Australia is arguably Kirks or River Port, a soft drink manufacturer with a variety of other products. As of 2005, Kirks creaming soda is made and distributed by Coca Cola. Up until the mid 1990s, Kirks also produced Snow Cap, which was essentially the vanilla flavored brown version of the drink. The name "Snow Cap" was created to differentiate the pink and brown versions of the drink. Snow Cap is no longer produced. Cadbury Schweppes markets Cream Soda as part of their 'Schweppes Traditional' line of soft drinks. Until recently it was deep red in all states except Victoria where it was brown, but now both varieties are offered. The flavor is also different between the red and brown versions of 'Schweppes Traditional' with the red version having a small amount of raspberry flavor added to it.[citation needed] South Australian soft drink manufacturer Woodroofe produces "Sno-Top", a brown creaming soda drink. A second South Australian soft drink and cordial manufacturer Bickford's markets a deep red colored creaming soda.[9] Golden Circle is another a popular brand of creaming soda.

This is known as Creaming soda, Ice cream soda, Chill drink or cream soda, though the flavor changes are negligible. It is usually a bright yellow color or a white opaque. It is one of the many flavors sold by Foxton Fizz. It is also one of the many carbonated drink-flavors offered by Golden Circle.

Another variety is one referred to as Italian cream soda. This is usually a mixture of carbonated water and half and half or cream combined with vanilla syrup. Ratios vary widely, but the taste is usually that of sweetened, flavored milk.

The Netherlands has only one brand called Frizz, which is caramel-colored. However, Asian (especially Chinese) supermarkets also sell Schweppes Cream Soda. The cream sodas are imported from Hong Kong.[citation needed]

In the UK, cream soda was traditionally served with a dessert-spoonful of vanilla ice cream floating on the top, but this has now become a rarity in recent years.[citation needed] It is vanilla-flavored, slightly glutinous and has a uniquely thick, "soft" and long-lasting foam. A.G. Barr, Ben Shaw's (a Cott brand), and DG Jamaica manufacture their own brands of cream soda, and most supermarkets sell it under their respective own brands. Pakola, a Pakistani brand of ice cream soda, is available in most Asian retailers.

In India, two brands of cream soda are Cottons and Bijoli.

In Japan, "cream soda" is a term used for an ice cream float made with melon-flavored soda topped with a scoop of vanilla ice cream.

In Malaysia, the F&N or Fraser and Neave brand makes a clear Ice Cream Soda.

In South Africa and Zimbabwe, cream soda is sold under the label Sparletta Creme Soda, a product of the Coca-Cola company. It is green in color, with a rose/floral taste.

In South Africa, Creme Soda is often referred to as the "Green Ambulance" (predominantly by students), as it is believed to alleviate the effects of hangovers. Creme Soda is also used as a mixer with cane spirit (an inexpensive alcoholic beverage distilled from fermented sugarcane). This is commonly known as a "John Deer" (cf. John Deere and its green logo), "Cane Train", or "Green Mamba". Cane spirit is chosen due its ability to go relatively unnoticed.