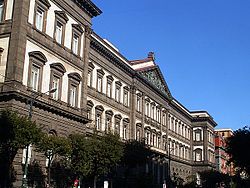 The University of Naples Federico II (Italian: Università degli Studi di Napoli Federico II) is a university located in Naples, Italy. It was founded in 1224 and is organized into 13 faculties. It is the world's oldest state university[1] and one of the oldest academic institutions in continuous operation. The university is named after its founder Frederick II.

The University of Naples Federico II was founded by emperor of the Holy Roman Empire Frederick II on 5 June 1224. It is the most ancient institution state-supported of higher education and research in the world. One of the most famous students of this university was Roman Catholic theologian and philosopher Thomas Aquinas.

Fredrick II had a precise political project when he stated to found the university in Naples: first, to train administrative and bureaucracy skilled professionals for the "curia regis" (the kingdom ministries and governance apparatus), also it was necessary to prepare lawyers and judges who would help the sovereign in order to draft laws and executing justice; secondly he wanted to facilitate the promising young students and scholars in their cultural formation, avoiding their unnecessary and expensive trips abroad (that is also more pragmatically to say that by creating a State University, emperor Frederick avoided that young students of his reign will complete their trainining at University of Bologna which was a city hostile to the imperial power).[2][3][4]

The University of Naples was arguably the first to be formed from scratch by a higher authority, rather than upon an already-existing private school. Although its claim to be the first state-sponsored university can be challenged by Palencia (which was founded by the Castilian monarch c.1212), Naples was certainly the first chartered one.[5]

The artificiality of its creation posed great difficulties in attracting students (Thomas Aquinas was one of the few who came in these early years). The university's early years were further complicated by the long existence, in nearby Salerno of Europe's most prestigious medical faculty, the Schola Medica Salernitana. The fledgling faculty of medicine at Naples had little hope to compete with it, and in 1231, the right of examination was surrendered to Salerno. The establishment of new faculties of theology and law under papal sponsorship in Rome in 1245 further drained Naples of students, as Rome was a more attractive location. In an effort to revitalize the dwindling university, in 1253, all the remaining schools of the university of Naples moved to Salerno, in the hope of creating a single viable university for the south.[6] But that experiment failed and the university (minus medicine) moved back to Naples in 1258 (in some readings, Naples was "refounded" in 1258 by Manfred Hohenstaufen, as by this time there were hardly any students left). The Angevin reforms after 1266 and the subsequent decline of Salerno gave the University of Naples a new lease on life and put it on a stable, sustainable track.[5]

The university is divided into 13 faculties: