Arthur Andersen LLP, based in , was once one of the "Big Five" accounting firms among , , and , providing , , and services to large s. In 2002, the firm voluntarily surrendered its licenses to practice as s in the after being found guilty of criminal charges relating to the firm's handling of the auditing of , the energy corporation, resulting in the loss of 85,000 jobs. Although the verdict was subsequently overturned by the , it has not returned as a viable business.

One of the few revenue-generating assets that the Andersen firm still has is The Q Center, a conference and training facility outside of Chicago. 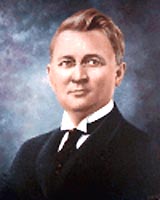 thumb|right|Arthur_Andersen_(1885-1947)_-_In_1913,_Arthur_Andersen_and_Clarence_Delaney,_both_from_, bought out The Audit Company of Illinois to form Andersen, Delaney & Co which became Arthur Andersen & Co. in 1918. split from the parent in 1989 to become the largest in the world, and it was renamed on 01 Jan 2001.] The firm of Arthur Andersen was founded in 1913 by Arthur Andersen and Clarence DeLany as Andersen, DeLany & Co. [cite journal | first=Mary Virginia | last=Moore | coauthors=Crampton, John | title=Arthur Andersen: Challenging the Status Quo| format=.PDF | journal=The Journal of Business Leadership | publisher=American National Business Hall of Fame | url=http://www.anbhf.org/pdf/moore_crampton.pdf | volume=11 | issue=3 | pages=71–89 | date=2000 | accessdate=2008-05-05] The firm changed its name to Arthur Andersen & Co. in 1918. Arthur Andersen's first client was the of .

Andersen was orphaned at the age of 16 at which point he began working as a mailboy by day and attended school at night, eventually being hired as the assistant to the of Allis-Chalmers in Chicago. At 23 he became the youngest CPA in Illinois. In 1917, after attending courses at night while working full time, he graduated from the at with a bachelor's degree in business.

In 1913 at the age of 28, he entered into business for himself under the firm name of Arthur Andersen & Co. In 1915, due to his many contacts there, the Milwaukee office was opened as the firm's second office. From 1912 to 1922, he was a professor of accounting at where he was the first to design courses that forced accounting students to deal with practical operating problems of business organizations.

Andersen had an unwavering faith in education as the basis upon which the new profession of should be developed. He created the profession's first centralized training program and believed in training during normal working hours. He was generous in his commitment to aiding educational, civic and charitable organizations. In 1927, he was elected to the Board of Trustees of Northwestern University and served as its president from 1930 to 1932. He was also chairman of the board of certified public accountant examiners of Illinois.

Andersen, who headed the firm until his death in 1947, was a zealous supporter of high standards in the industry. A stickler for honesty, he argued that accountants' responsibility was to investors, not their clients' management. During the early years, it is reputed that Andersen was approached by an executive from a local rail utility to sign off on accounts containing flawed accounting, or else face the loss of a major client. Andersen refused in no uncertain terms, replying that he would not sign the accounts "for all the money in America." , who succeeded Andersen at the founder's death, continued this emphasis on honesty. For many years, Andersen's motto was "Think straight, talk straight."

Andersen also led the way in a number of areas of accounting standards. Being among the first to identify a possible sub-prime bust, Andersen dissociated itself from a number of clients in the 1970s. Later, with the emergence of as a form of compensation, Andersen was the first of the major accountancy firms to propose to the that stock options should be expensed, thus impacting on net profit just as cash compensation would.

By the 1980s, standards throughout the industry fell as accountancy firms struggled to balance their commitment to audit independence against the desire to grow their burgeoning consultancy practices. Having established a reputation for IT consultancy in the 1980s, Andersen was no exception. The firm rapidly expanded its consultancy practice to the point where the bulk of its revenues were derived from such engagements, while audit partners were continually encouraged to seek out opportunities for consulting fees from existing audit clients. By the late-1990s, Andersen had succeeded in tripling the per-share revenues of its partners.

Predictably, Andersen struggled to balance the need to maintain its faithfulness to accounting standards with its clients' desire to maximize profits, particularly in the era of quarterly earnings reports. Andersen has been alleged to have been involved in the fraudulent accounting and auditing of , , , and the , , as well as the infamous case, among others.

The consulting wing of the firm became increasingly important during the 1970s and 1980s, growing at a much faster rate than the more established accounting, auditing, and tax practice. This disproportionate growth, and the consulting division partners' belief that they were not garnering their fair share of firm profits, created increasing friction between the two divisions.

In 1989, Arthur Andersen and became separate units of . Andersen increased its use of accounting services as a springboard to sign up clients for Andersen Consulting's more lucrative business.

Perhaps most telling about who won the decision was that four hours after the arbitrator made his ruling, Arthur Andersen CEO suddenly resigned. Industry analysts and business school professors alike viewed the event as a complete victory for Andersen Consulting. [cite web | author=Mitchell Martin | title=Arbitrator's Ruling Goes Against Accounting Arm: Consultants Win Battle Of Andersen | url=http://www.iht.com/articles/2000/08/08/consult.2.t.php | work=International Herald Tribune | date=8 August 2000 | accessdate=2008-05-05] Jim Wadia would provide insight on his resignation years later at a Harvard Business school case activity about the split. It turned out that the Arthur Andersen board passed a resolution saying he had to resign if he didn't get at least an incremental US$4 billion (either through negotiation or via the arbitrator decision) for the consulting practice to split off, hence his quick resignation once the decision was announced.Fact|date=February 2007

Accounts vary on why the split occurred &mdash; executives on both sides of the split cite greed and arrogance on the part of the other side, and executives on the Andersen Consulting side maintained breach of contract when Arthur Andersen created a second consulting group, AABC (Arthur Andersen Business Consulting) which began to compete directly with Andersen Consulting in the marketplace. Many of the AABC firms were bought out by other consulting companies in 2002, most notably, and KPMG Consulting, which later changed its name to .

On , , Andersen was convicted of for shredding documents related to its audit of , resulting in the . (Andersen Legal Dept.) and (Lead Partner for the Enron account) were cited as the responsible managers in this scandal as they had given the order to shred relevant documents. Since the does not allow convicted felons to audit public companies, the firm agreed to surrender its CPA licenses and its right to practice before the SEC on , - effectively putting the firm out of business in the U.S. Meanwhile, Anderson's non-U.S. practices ceased to be viable due to reputational collateral damage. Most of them were taken over by the local firms of the other major international accounting firms.

The Andersen indictment also put a spotlight on its faulty audits of other companies, most notably , Sunbeam and . The subsequent of WorldCom, which quickly surpassed Enron as the biggest bankruptcy in history, led to a of accounting and like corporate scandals that continue to tarnish American business practices.

On , , in the case "", the unanimously reversed Andersen's conviction due to what it saw as serious flaws in the . [cite court |litigants=Arthur Andersen, LLP v. United States |vol=544 |reporter=U.S. |opinion=696 |pinpoint= |court= |date=2005 |url=http://www.law.cornell.edu/supct/html/04-368.ZS.html|quote=] In the court's view, the instructions were far too vague to allow a jury to find obstruction of justice had really occurred. The court found that the instructions were worded in such a way that Andersen could have been convicted without any proof that the firm knew it had broken the law or that there had been a link to any official proceeding that prohibited the destruction of documents. The opinion, written by Chief Justice , was also highly skeptical of the government's concept of "corrupt persuasion"—persuading someone to engage in an act with an improper purpose even without knowing an act is unlawful.

Since the ruling vacated Andersen's felony conviction, it theoretically left Andersen free to resume operations. However, Andersen has not returned as a viable business even on a limited scale. There are over 100 civil suits pending against the firm related to its audits of Enron and other companies. In addition, its reputation was so badly tarnished that no company wanted Andersen's name on an audit. Even before voluntarily surrendering its right to practice before the SEC, it had many of its state licenses revoked. It began winding down its American operations after the indictment, and many of its accountants left to join other firms. The firm sold most of its American operations to , , and .

From a high of 28,000 employees in the US and 85,000 worldwide, the firm is now down to around 200 based primarily in Chicago. Most of their attention is on handling the lawsuits and presiding over the orderly dissolution of the company.

, Arthur Andersen LLP has not been formally dissolved nor has it declared bankruptcy. Ownership of the partnership has been ceded to four limited liability corporations named Omega Management I through IV.