Mandarin Airlines, Limited (華信航空; pinyin: Huáxìn Hángkōng) is an airline based in Songshan District, Taipei, Taiwan.[1] The Republic of China-based airline is China Airlines' regional and domestic subsidiary. It also operates charter services. Its main base is Taichung Airport.

On 16 October 1991, Mandarin Airlines started operations with direct flights from Taipei to Sydney in Australia. The next step was the opening of a direct air route to Vancouver in Canada on 7 December 1991. Thus, Mandarin Airlines became ROC's first airline to fly direct to Australia and Canada.[citation needed] The China Trust Group pulled its investment in Mandarin Airlines on 31 October 1992, turning the airline into a company virtually wholly owned by China Airlines (90.05%) by December 1992. Also, Mandarin Airlines' role was changed to be a primary domestic and short-range intra-regional airline,[2] after parent China Airlines was able to re-establish its emphasis on international routes, due to it changed to a new livery that did not include the national flag, and thus faced less objection from PRC.[citation needed]

On 8 August 1999 China Airlines formally merged its subsidiary, Mandarin Airlines, with Formosa Airlines under the Mandarin name. Mandarin took over Formosa's domestic operations and aircraft while Mandarin's fleet and most of its international flights were transferred to China Airlines.[2] In early 2000, the airline bought 5 Dornier 228 from Uni Air to fly out-lying routes. These planes were sold to Daily Air in 2005, a helicopter carrier in Taiwan which recently won the bid to fly these money-losing routes.[citation needed]

The airline uses Hai Tung Ching, a golden eagle from a Chinese legend, as its logo.[4]

Mandarin Airlines operates the following services (as of April 2011) [5] The mainland Chinese destinations may include scheduled charter service or indirect routing which transit through non-Chinese country. 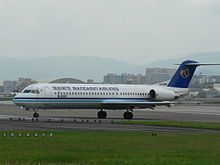 A Mandarin Airlines Fokker 100 preparing to take off in Taipei Songshan Airport.

The Mandarin Airlines fleet includes the following aircraft (as of October 2009)[6]:

Mandarin Airlines announced the lease of three Embraer E-190s and five Embraer E-195 aircraft from GE Commercial Aviation Services. The aircraft will be used on the dedicated connection flights between Kaohsiung International Airport and Taiwan Taoyuan International Airport as well as shorthaul routes in Asia, and replace the fleet of Fokker 50 and Fokker 100s.[7] The first of eight leased Embraer E-190/195s was delivered to the airline in May 2007, the first to a Taiwanese airline.[8] The Embraer E-190s feature a refreshened livery.[9] On October 27, 2009, Mandarin Airlines retired its last Fokker 100 aircraft(B12291), ending this type's 14-year serving era.[10] 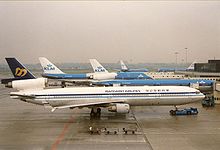