The Clutha River / Mata-Au is the second longest river in New Zealand flowing south-southeast 338 kilometres (210 mi) through Central and South Otago from Lake Wanaka in the Southern Alps to the Pacific Ocean, 75 kilometres (47 mi) south west of Dunedin. It is the highest volume river in New Zealand, and the swiftest, with a catchment of 21,960 square kilometres (8,480 sq mi), discharging a mean flow of 614 cubic metres per second (21,700 cu ft/s).[1][2] The Clutha River is known for its scenery, gold-rush history, and swift turquoise waters. A river conservation group, the Clutha Mata-Au River Parkway Group, is working to establish a regional river parkway, with a trail, along the entire river corridor. The name of the river was changed to a dual name by the Ngai Tahu Claims Settlement Act 1998.[3] 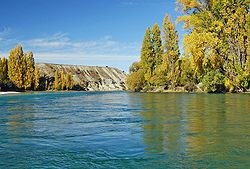 On the Clutha River at Albert Town, near Lake Wanaka, Central Otago. 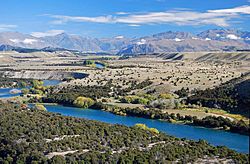 The ultimate source of the river is at the head of the Makarora River, close to the saddle of the Haast Pass, which flows into the northern end of Lake Wanaka. The southern end of the lake drains into the nascent Clutha close to Albert Town, where it is met by its first main tributary, the Hawea River the outflow of Lake Wanaka's twin, Lake Hawea. It is also met here by the Cardrona River.

From here the river flows swiftly through the Upper Clutha Valley between ancient glacial terraces, negotiating a long section called the 'Snake' before reaching a rare switchback feature called the Devil's Nook near the town of Luggate. The river soon narrows as it passes through the Maori Gorge at Queensberry. Shortly thereafter it is joined by another tributary, the Lindis, before widening as it enters Lake Dunstan, an artificial lake created behind the massive hydroelectric dam at Clyde.

Fifty kilometres south of Lake Wanaka, the Clutha reaches the town of Cromwell, which was substantially altered when the Clyde Dam project was commissioned in 1992. Here the river is joined by the waters of the Kawarau, which flows from Lake Wakatipu. Prior to the construction of the Clyde Dam, this river junction, known as the Cromwell Junction [4], was renowned for the difference in colour between the two rivers’ waters.

The river then flows southeast through the inundated Cromwell Gorge to Clyde, and nearby Alexandra, where it is joined by the waters of the Manuherikia River. South of Alexandra the river widens again to form Lake Roxburgh, another artificial lake, behind the Roxburgh Dam, which was commissioned in 1956. The hydro reservoir flooded the Roxburgh Gorge and several large rapids including the Molyneux Falls and the Golden Falls. The town of Roxburgh sits close to the river, 120 kilometres (75 mi) downstream from Lake Wanaka.

From here the river continues southeast past the towns of Ettrick, Millers Flat, and Beaumont, before flowing through the Rongahere Gorge admired for its native bush corridor and for the Birch Island native reserve. Beyond here, the river is met by the Tuapeka River at Tuapeka Mouth. At this point the river turns southward, before being met by its last major tributary, the Pomahaka River, which joins the Clutha 30 kilometres (19 mi) from the coast. The river passes the town of Balclutha before widening into the Clutha delta which contains the large flat island of Inch Clutha. Here the river divides into two branches, the Matau (northern), which flows past Kaitangata, and Koau (southern). Both branches flow into the Pacific Ocean at Molyneux Bay.

The Clutha's average discharge is estimated at 614 cubic metres per second (21,700 cu ft/s),[1] comparable to many much larger rivers. This heavy flow, combined with the relatively small size of the river in global terms, makes the Clutha notoriously fast-flowing, and it is often listed as one of the world's most swiftly flowing rivers, alongside Australia's Macleay and Fitzroy Rivers, the Amazon and Atrato Rivers in South America, and the Teesta River in the Himalaya.

The waters of the Upper Clutha are clear turquoise, the result of glacial and snow-melt filtering when the water flows through Lake Wanaka. This is a rare characteristic for a high volume river. Below Cromwell, where the silt-laden Kawarau enters, the waters are less turquoise.

Beyond the river's mouth

Such is the nature of the geology of the New Zealand region that the true river tells only half the story of the Clutha's course. Beyond its mouth, a submarine canyon system extends for over 100 kilometres into the South Pacific Ocean, eventually becoming the Bounty Trough. The canyon system bears a remarkable resemblance to the pattern of river and tributaries visible on land, so much so that many of the rivers which empty into the sea along the Otago coast can virtually be considered tributaries of the Clutha's submarine system. These rivers include the Tokomairiro, Taieri, Waikouaiti, Shag, and even the Waitaki.

The upper reaches of the river once abounded in flightless Moa, predated upon by the Haast's Eagle. The river was known by the Māori as Mata-au, meaning current or eddy in an expanse of water.[5] This name, now more frequently rendered as Matau, is still used for one of the two main channels of the Clutha delta. In the early days of European exploration there was at least one settlement of some 250-300 Māori close to the river's banks. The river takes its European name from Cluaidh, the Scots Gaelic name for the River Clyde in Scotland which runs through Glasgow. During New Zealand's early colonial history it was known as the Molyneux, that name given to it by Captain Cook. During early European settlement, a whaling station was established close to the river's mouth, and during this period the sea was the source of almost all of the area's economy.

The river featured greatly in the Central Otago goldrush. The first major gold deposits in Otago were discovered around the Tuapeka River at Gabriel's Gully by Gabriel Read in 1861, and the following year large amounts of the precious metal were discovered close to the site of modern Cromwell.

By Christmas 1861, 14,000 prospectors were on the Tuapeka and Waipori fields. The gold rush was short-lived, with most of the alluvial gold played out by 1863, but prospectors continued to arrive, swelling to a maximum of 18,000 miners in February 1864.[6]

The Clutha passes under the third Balclutha Road Bridge. The first bridge at this site was destroyed during the flood of 1878.

Several major floods have occurred on the Clutha, most notably the “Hundred year floods” of 14–16 October 1878 and 13–15 October 1978. The 1878 flood is regarded as New Zealand's greatest known flood. During this, a bridge at Clydevale was washed downstream, where it collided with the Balclutha Road Bridge, destroying the latter.

The 1978 flood, in which rivers from the Oreti in the south to the Tokomairiro in the north breached their banks, led to the inundation of over 12,000 hectares (30,000 acres) of land and the loss of over 21,000 livestock. Towns and areas affected stretched from Makarora in the north to Invercargill in the south. The town of Wyndham was completely evacuated, and the towns of Balclutha, Milton and Mataura were seriously affected with many residents moved. The small settlement of Kelso on the banks of the Pomahaka River was completely abandoned and was not rebuilt once the waters subsided.[7] At its peak, at 6.00 a.m. on the 15th, the Clutha's flow was measured at just over 4,500 cubic metres per second (160,000 cu ft/s).[8]

A major flood in 1999 caused serious damage to river communities, especially Alexandra. The flooding in Alexandra was attributed to a rise in the riverbed, resulting from silt loading in the Roxburgh reservoir behind the Roxburgh Dam downriver from the town. The 1878 flood had not flooded the town, but the 1999 did, despite being only 80% of the volume of the 1878 flood. [2].

There are two hydroelectric power stations, the Clyde Dam and the Roxburgh Dam, located on the river providing electricity to the New Zealand power grid.

The Clutha also provides irrigation for stone fruit orchards around Cromwell, Alexandra, and Roxburgh, which provide apples, apricots, nectarines, cherries, and peaches. Several small vineyards are also found in the upper reaches of the river.

The spectacular scenery of Central Otago makes the upper Clutha a popular holiday destination, especially for adventure tourism. Jetboating, kayaking, rafting, riverboarding, and guided fishing occurs on the river, and waterskiing, tandem parachuting and parapenting operators are all to be found in the area. The upper Clutha is also used for multi-sports events, and Lake Dunstan is an important rowing venue. Several major ski courses are found close to the river. Curling is also played close to the Clutha in the harsh Central Otago winters.