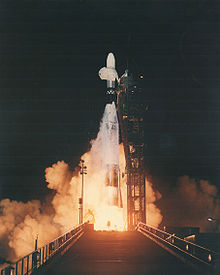 Mariner 5 (Mariner Venus '67) was a spacecraft of the Mariner program that carried a complement of experiments to probe Venus' atmosphere by radio occultation, measure the hydrogen Lyman-alpha (hard ultraviolet) spectrum, and sample the solar particles and magnetic field fluctuations above the planet. Its goals were to measure interplanetary and Venusian magnetic fields, charged particles, plasmas, radio refractivity and UV emissions of the Venusian atmosphere.

Mariner 5 was actually built as a backup to Mariner 4, but after the success of the Mariner 4 mission, it was modified for the Venus mission by removing the TV camera, reversing and reducing the four solar panels, and adding extra thermal insulation.

It was launched toward Venus on June 14, 1967 from Cape Canaveral Air Force Station Launch Complex 12 and flew by the planet on October 19 that year at an altitude of 3,990 kilometres (2,480 mi). With more sensitive instruments than its predecessor Mariner 2, Mariner 5 was able to shed new light on the hot, cloud-covered planet and on conditions in interplanetary space.

Radio occultation data from Mariner 5 helped to understand the temperature and pressure data returned by the Venera 4 lander, which arrived at Venus shortly before it. After these missions, it was clear that Venus had a very hot surface and an atmosphere even denser than expected.

The operations of Mariner 5 ended in November 1967 and it is now defunct in a heliocentric orbit.

Further communication attempts were tried, in a joint spacecraft solar wind / solar magnetic fields investigation with Mariner 4, back in communication with Earth after being out of telemetry for about a year or more around superior conjunction. During the experiment, both spacecraft were going to be on the same idealized magnetic field spiral carried out from the sun by the solar wind.

On October 14, the receiver operator at DSS 14 obtained a lock on the Mariner 5 signal. A carrier wave was detected, but outside expected frequency limits and varying in wavelength. Signal strength changes indicating the spacecraft was in a slow roll. Nevertheless, it was possible to lock the spacecraft to an uplink signal, but no response was observed to any commands sent to it. Without telemetry and without any signal change in response to commands, there was no possibility to repair or continue to use the spacecraft. Operations were terminated at the end of the track from DSS 61 at 07:46 GMT on November 5, 1968.