Mariner 10 was an American robotic space probe launched by NASA on November 3, 1973, to fly by the planets Mercury and Venus. It was launched approximately two years after Mariner 9 and was the last spacecraft in the Mariner program (Mariner 11 and 12 were allocated to the Voyager program and redesignated Voyager 1 and Voyager 2). The mission objectives were to measure Mercury's environment, atmosphere, surface, and body characteristics and to make similar investigations of Venus. Secondary objectives were to perform experiments in the interplanetary medium and to obtain experience with a dual-planet gravity assist mission.

Mariner 10 was the first spacecraft to make use of an interplanetary gravitational slingshot maneuver, using Venus to bend its flight path and bring its perihelion down to the level of Mercury's orbit. This maneuver, inspired by the orbital mechanics calculations of the Italian scientist Giuseppe Colombo, put the spacecraft into an orbit that repeatedly brought it back to Mercury. Mariner 10 used the solar radiation pressure on its solar panels and its high-gain antenna as a means of attitude control during flight, the first spacecraft to use active solar pressure control. 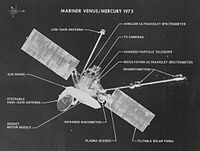 The imaging system, the Television Photography Experiment, consisted of two 15 cm (5.9″) Cassegrain telescopes feeding vidicon tubes.[1] The main telescope could be bypassed to a smaller wide angle optic, but using the same tube.[1] It had a 8-position filter wheel, with one position occupied by a mirror for the wide-angle bypass.[1] They system returned about 7000 photographs of Mercury and Venus during Mariner 10's flybys.[1] 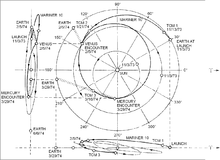 During its first week of flight, Mariner 10 tested its camera system by returning five photographic mosaics of Earth and six of the Moon. It also obtained photographs of the north polar region of the moon where prior coverage was poor. These provided a basis for cartographers to update lunar maps and improve the lunar control net.[2]

A trajectory correction maneuver was made on November 13, 1973. Immediately afterwards, the star-tracker locked onto a bright flake of paint which had come off the spacecraft and lost tracking on the guide star Canopus. An automated safety protocol recovered Canopus, but the problem of flaking paint recurred throughout the mission. The on-board computer also experienced unscheduled resets occasionally, which necessitated reconfiguring the clock sequence and subsystems. Periodic problems with the high-gain antenna also occurred during the cruise. In January 1974, Mariner 10 made ultraviolet observations of Comet Kohoutek. Another mid-course correction was made on January 21, 1974.

The spacecraft passed Venus on February 5, 1974, the closest approach being 5,768 km at 17:01 UT. Using a near-ultraviolet filter, it photographed the Cytherean chevron clouds and performed other atmospheric studies. It was discovered that extensive cloud detail could be seen through Mariner's ultraviolet camera filters. Venus's cloud cover is nearly featureless in visible light. Earth-based ultra-violet observation did reveal some indistinct blotching even before Mariner 10, but the detail seen by Mariner was a surprise to most researchers.

After looping once around the Sun while Mercury completed two orbits, Mariner 10 flew by Mercury again on September 21, 1974, at a more distant range of 48,069 km (29,869 mi) below the southern hemisphere.

With its maneuvering gas just about exhausted, Mariner 10 started another orbit of the Sun. Engineering tests were continued until March 24, 1975, when final depletion of the nitrogen supply was signaled by the onset of an un-programmed pitch turn. Commands were sent immediately to the spacecraft to turn off its transmitter, and radio signals to Earth ceased.

Mariner 10 is still orbiting the Sun, although its electronics have probably been damaged by the Sun's radiation.[3] Dave Williams of NASA's National Space Science Data Center said in 2005: "[Mariner 10] has not been tracked or spotted from Earth since it stopped transmitting. We can only assume it's still orbiting [The Sun], but the only way it would not be orbiting would be if it had been hit by an asteroid or gravitationally perturbed by a close encounter with a large body, the odds of that happening are extremely small so it is assumed to still be in orbit."

During its flyby of Venus, Mariner 10 discovered evidence of rotating clouds and a very weak magnetic field.

The spacecraft flew past Mercury three times. Owing to the geometry of its orbit – its orbital period was almost exactly twice Mercury's – the same side of Mercury was sunlit each time, so it was only able to map 40–45% of Mercury’s surface, taking over 2,800 photos. It revealed a more or less moon-like surface. It thus contributed enormously to our understanding of the planet, whose surface had not been successfully resolved through telescopic observation. The regions mapped included most or all of the Shakespeare, Beethoven, Kuiper, Michelangelo, Tolstoj, and Discovery quadrangles, half of Bach and Victoria, and small portions of Solitudo Persephones, Liguria, and Borealis.[4]