David Boies (born March 11, 1941) is an American lawyer and chairman of the law firm Boies, Schiller & Flexner.[1] He has been involved in various high-profile cases in the United States.

Boies was born in Sycamore, Illinois, to two teachers. He has four siblings. His first job was when he was 10 years old—a paper route with 120 customers. Boies has dyslexia and he did not learn to read until the third grade.[2] In 1954, the family moved to California. Boies graduated from Fullerton Union High School in Fullerton, California. Boies attended the University of Redlands, received a B.S. from Northwestern University in 1964, a law degree magna cum laude from Yale Law School in 1966 and an LL.M. from New York University School of Law 1967; he was awarded an hononary LL.D. from the University of Redlands in 2000. He currently serves on the Board of Trustees of the National Constitution Center in Philadelphia, which is a museum dedicated to the U.S. Constitution.[3] 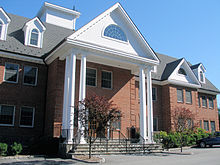 Boies was an attorney at Cravath, Swaine & Moore, where he started upon law school graduation in 1966 and became a partner in 1973. He left Cravath in 1997 after a major client objected to his representation of the New York Yankees even though the firm itself had found no conflict. He left the firm within 48 hours of being informed of the client's objection and created his own firm, now known as Boies, Schiller & Flexner LLP. It is currently rated 17th in "overall prestige" and 12th among New York law firms by Vault.com, a website on legal career information.

David Boies speaking about the Microsoft antitrust case at the Berkman Center for Internet & Society.

Boies owns a home in Westchester County, New York, a vineyard in Northern California, an oceangoing yacht, and a large wine collection.[16]

Boies was portrayed by actor Ed Begley, Jr. in the 2008 film Recount.

David and Mary Boies also fund the "Mary and David Boies Fellowships" for foreign students at the Harvard Kennedy School. The Boies give an annual picnic at their home for the incoming Teach for America corps for New York City (300-500 people). They support the Central European and Eurasian Law Institute (CEELI), a Prague-based institute that trains judges from newly democratized countries in Eastern Europe and the Middle East. There is a "Mary and David Boies Reading Room" at the CEELI Institute in Prague.

In his 2001 book, prosecutor and author Vincent Bugliosi criticized Boies' abilities as a trial lawyer, arguing that Boies "wasn't forceful or eloquent at all in making his points" in Bush v. Gore. "[A]lthough he seemed to have a very good grasp of the facts, he seemed completely incapable of drawing powerful, irresistible inferences from those facts that painted his opposition into a corner".[22]